Just a look when hooked: No limit on trout in catch, release season 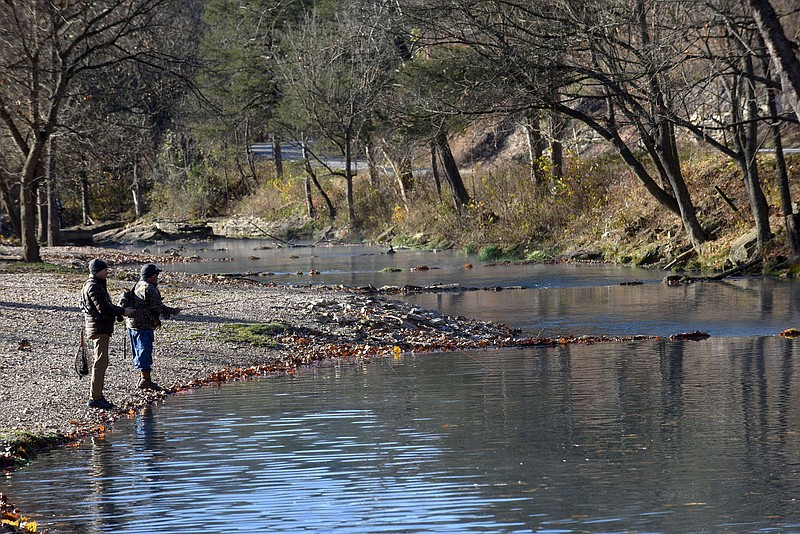 Two anglers have the river mostly to themselves on Nov. 19 2021 at Roaring River State Park. Catch and release fishing for trout is allowed Friday through Monday from the second Friday in November to the second Monday in February. Fishing is with flies only. (NWA Democrat-Gazette/Flip Putthoff)

"My goal is to catch 100 trout in a day," the angler from Monett, Mo. said. He and a handful of fishing mates were bundled head to toe on a sunny, but cold, morning Nov. 19 at the trout fishing park.

"They're slow today. Usually the action is nonstop," Berger testified.

Fishing can be on fire or slow as honey in the winter during catch and release trout season at Roaring River. The Missouri state park south of Cassville, Mo., allows catch and release fishing on Fridays, Saturdays, Sundays and Mondays from 8 a.m. to 4 p.m. The season opens the second Friday in November and runs through the second Monday in February.

Fishermen can catch all the trout they can coax to a hook, long as they let every fish go.

Anglers must use only fishing flies, but hair jigs commonly used to catch crappie are considered flies under the park's fishing regulations. Anglers can get their flies to the water with any type of rod and reel. Fly rods are typically used, but lightweight spin-cast outfits are favored by some.

Pools separated by short shoals characterize spring-fed Roaring River as it meanders for about 1.5 miles through the scenic park. Its source is Roaring River Spring which pumps 20 million gallons of water daily into the stream. Its 50-degree water is perfect for the cold-water rainbow trout raised by the Missouri Department of Conservation at Roaring River Hatchery. It's situated close to the spring at the north end of the state park.

The number of anglers is usually low enough that fishermen have entire pools and long sections of trout-filled water to themselves. That's a far cry from the catch and keep season when anglers sometimes fish elbow to elbow along the stream. Anglers may keep trout from March 1-Oct. 31, and regulations are different.

Chats with anglers on this chilly November morning revealed a menu of preferred fishing flies. Craig McMahon of Republic, Mo., lobs fuzzy woolly bugger flies. Or he lobs San Juan worms that look like small snips of yarn. Dark green is a good color at Roaring River, he said. Light line is key.

Flies that look like ants work well for McMahon all through December, he said.

Peace, quiet and good fishing call to Bob Black every autumn. He's fished at Roaring River most of his life.

"I started coming here with my dad when I was 8 or 9 in the 1950s," said Black, who's now 74 and lives in Monett. "We'd try to see who could catch five fish in five casts. My dad was a muddler minnow man. A muddler minnow with a spinner, that was his go-to fly.

"Back in those days, you could catch your trout and take it to the lodge, and they'd cook it for you," Black recalled. The park looks remarkably the same now as it did when he visited as a boy, he noted.

Many buildings and trails at the park were built in the 1930s by Civilian Conservation Corps workers. A visit to the park can be filled with activity even if fishing isn't on the agenda. Hiking trails range from easy to moderate in difficulty. People are welcome to tour the trout hatchery and see Roaring River Spring. There are playgrounds for youngsters. Just strolling through the park on a cool winter day is pleasant.

Most anglers don't have high hopes of a 100-fish day like Berger. Has he ever reached that goal? 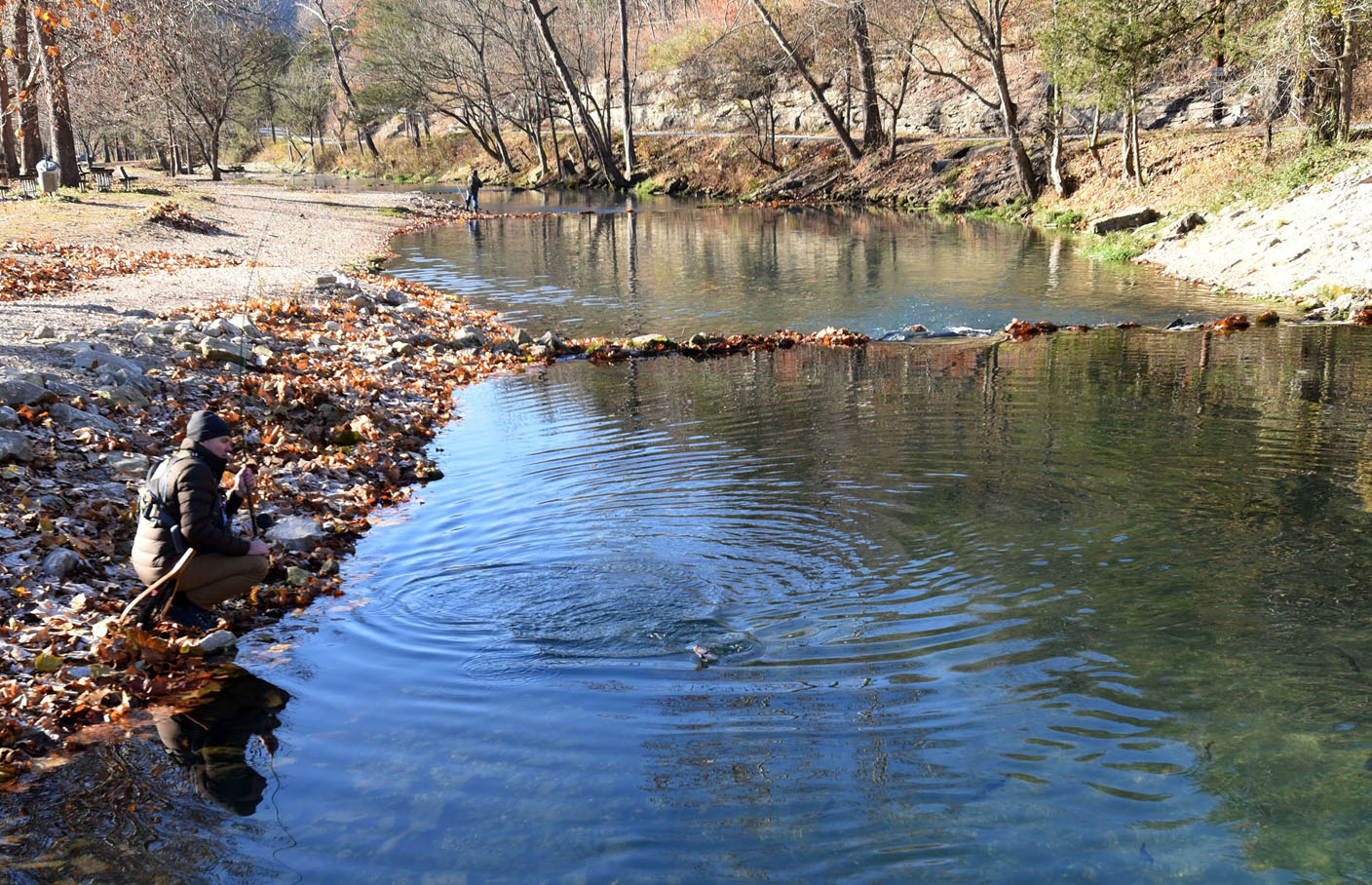 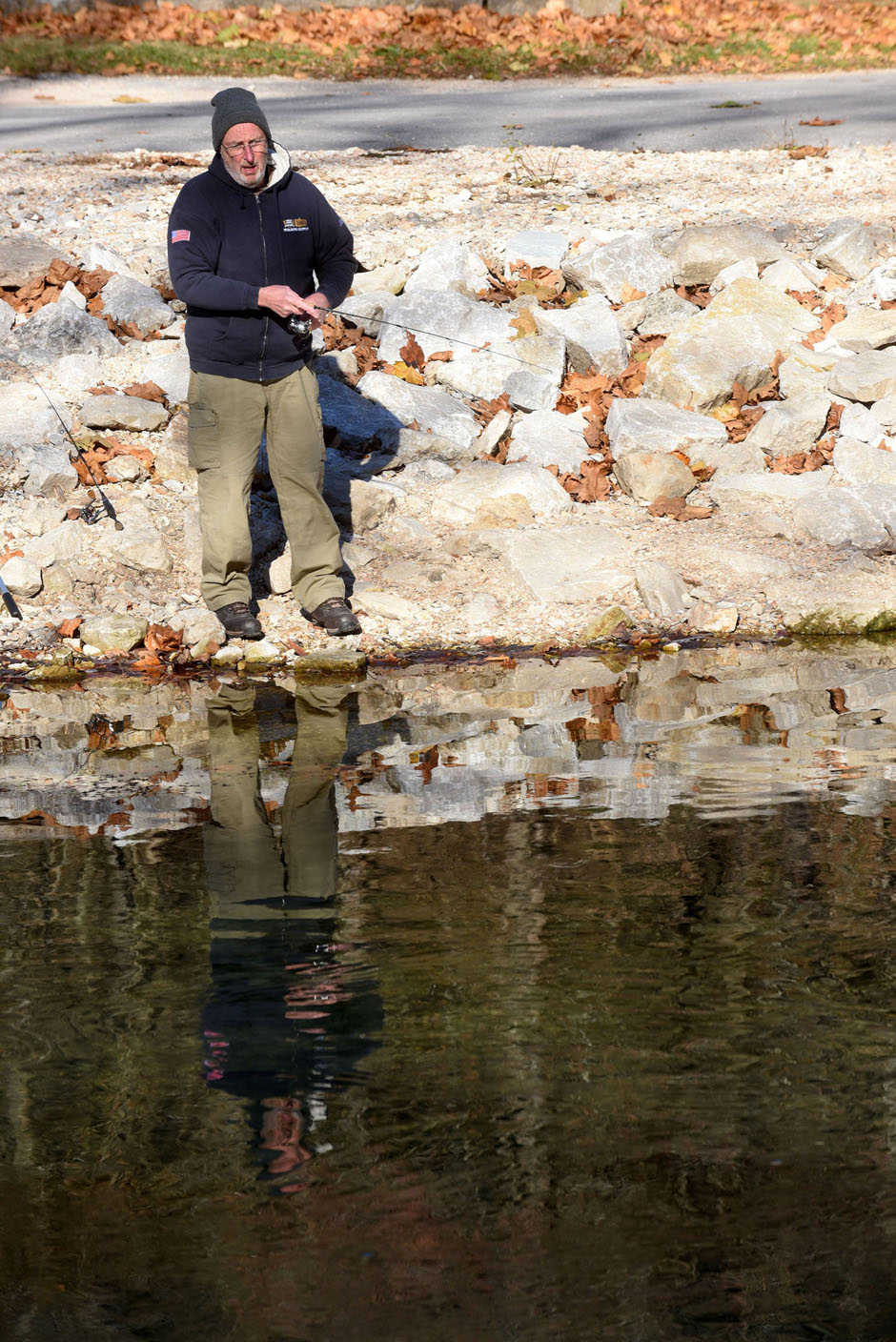 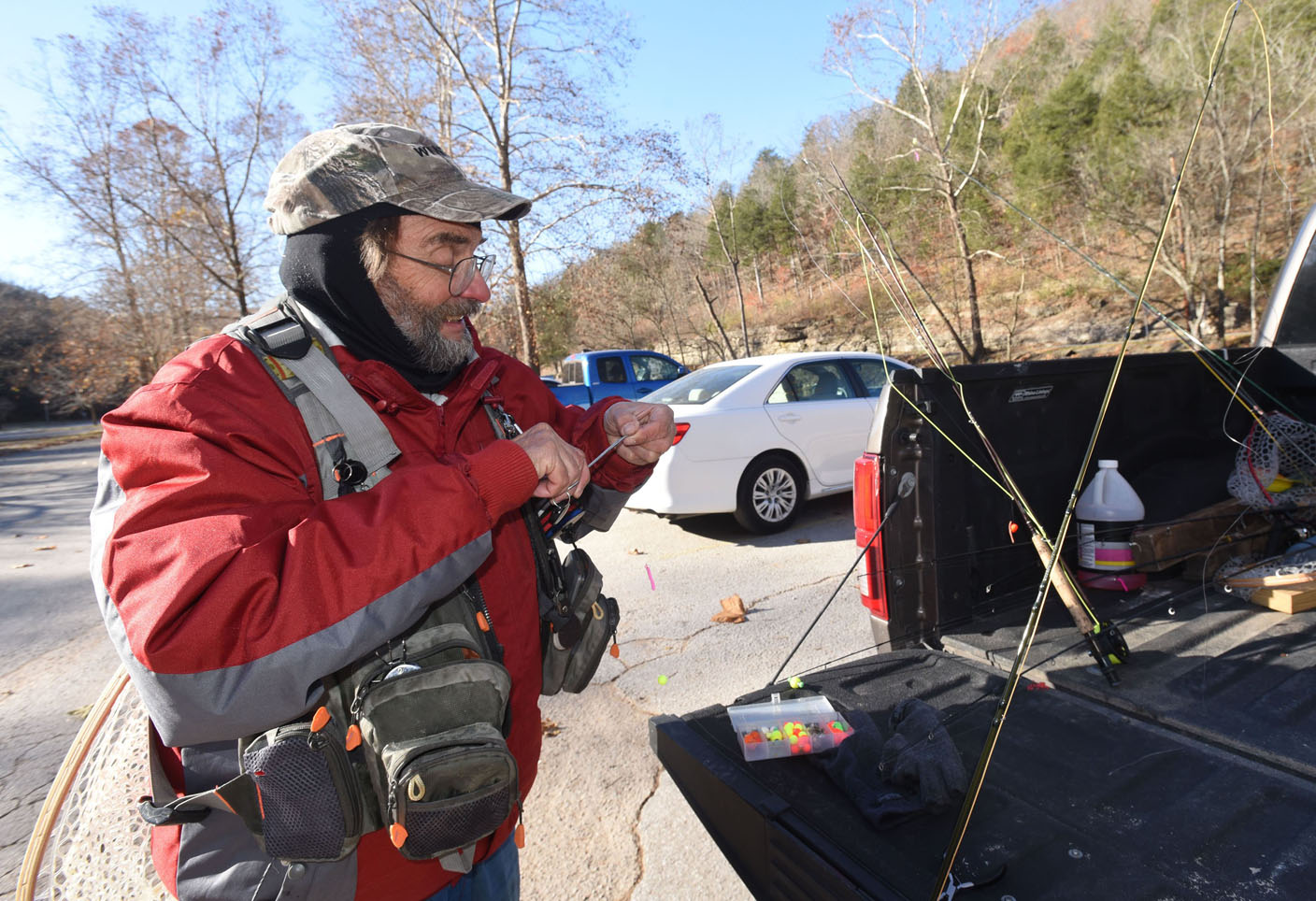 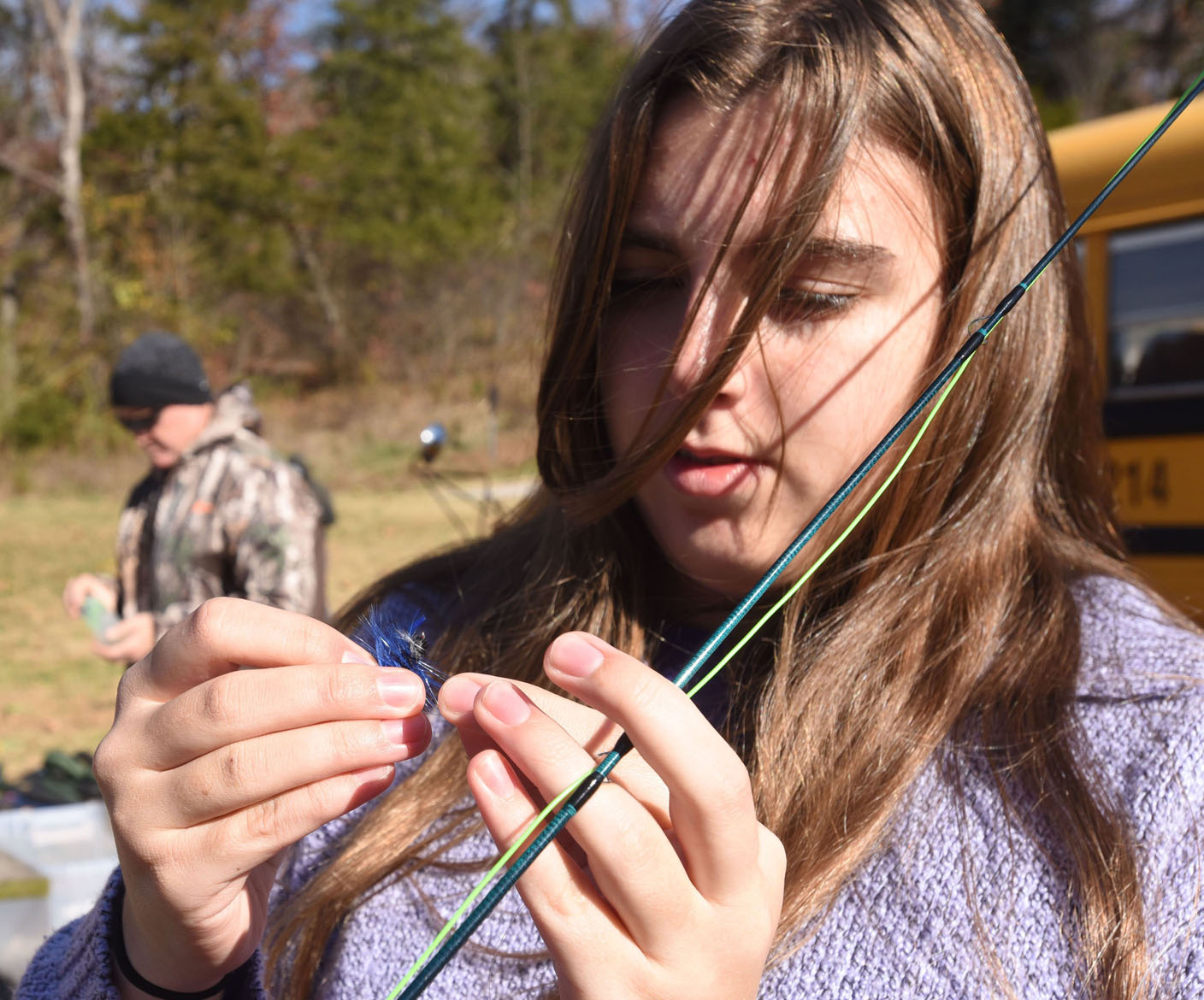 Abigail Rasico rigs up Nov. 19 2021 with a fly she tied herself in outdoor education class at Bentoville High School. Outdoor education students tried their hand at fly fishing at Roaring River with help from the Bella Vista Fly Tyers. (NWA Democrat-Gazette/Flip Putthoff) 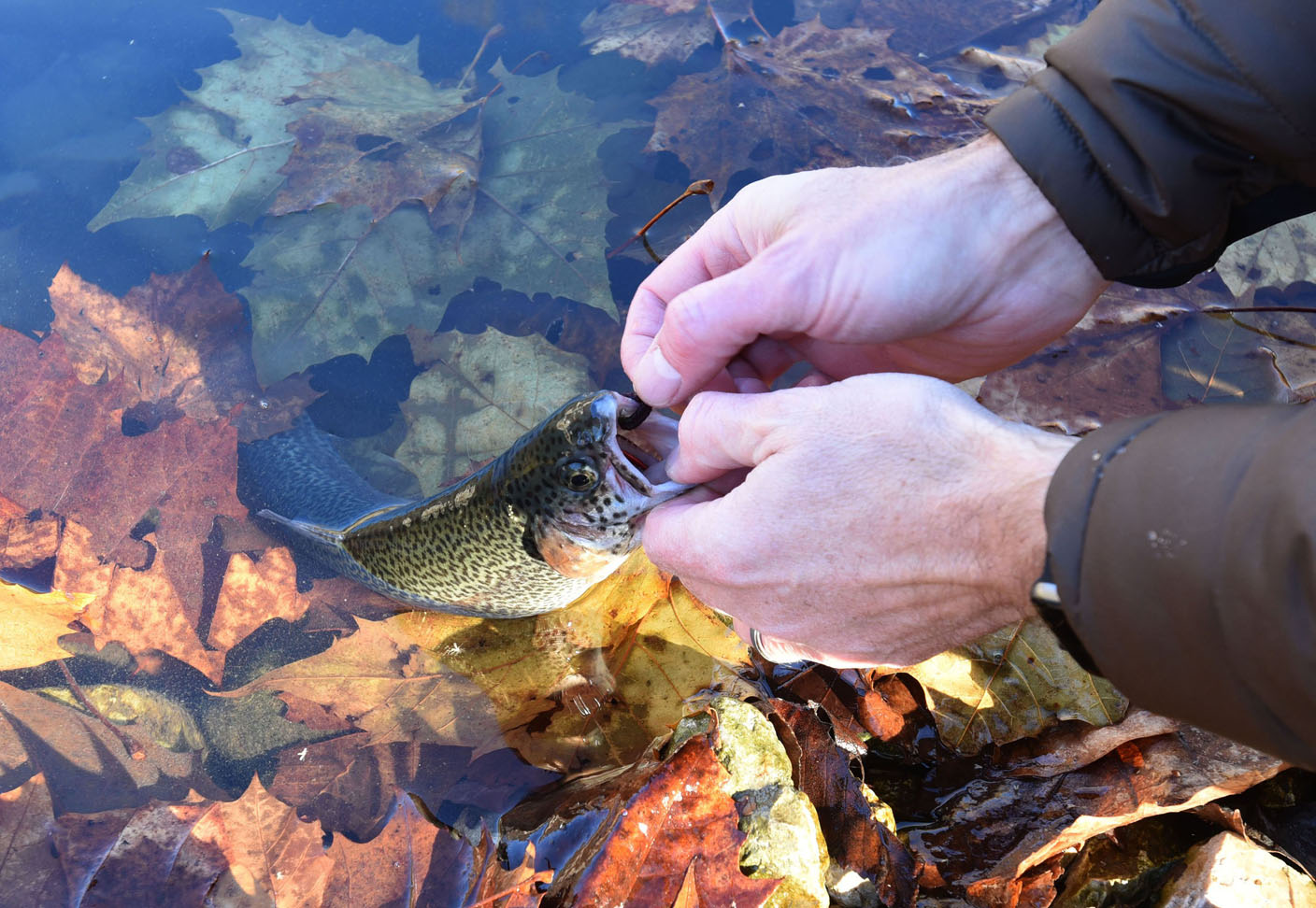 Anglers may catch and release trout at Roaring River State Park from 8 a.m. to 4 p.m. each Friday through Monday until the second Monday in February. Fishing is with flies only. Hair jigs are considered flies at Roaring River.

A Missouri fishing license and Missouri annual trout permit is required for anglers 16 and older.