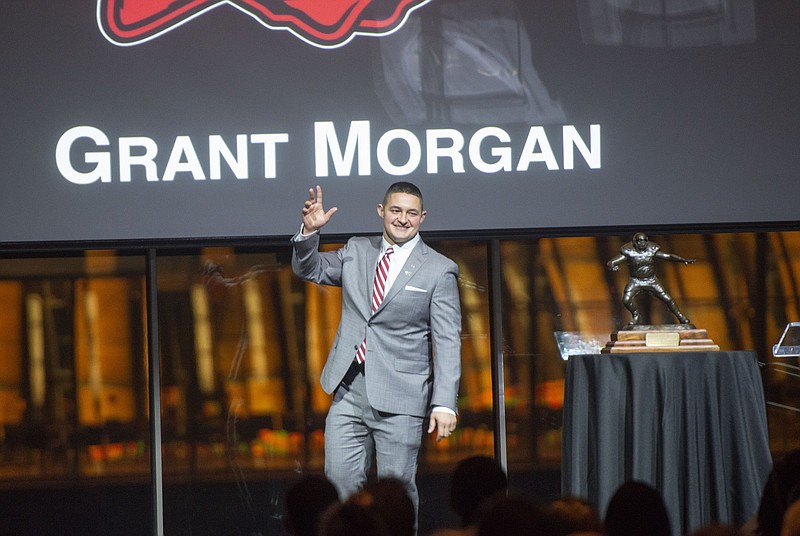 BENTONVILLE -- The second time was the charm for University of Arkansas linebacker Grant Morgan.

The Razorbacks' super senior linebacker from Greenwood won the 12th Burlsworth Trophy on Monday night before a rowdy home-team environment at Crystal Bridges Museum of American Art, including University of Arkansas Coach Sam Pittman and his wife, Jamie.

Morgan, the first Burlsworth Trophy finalist in UA history, had been a finalist last season when he racked up 111 tackles.

"This is better than the Heisman, I don't care what they say," Morgan said immediately after the announcement.

Morgan won the award over the other two finalists: Quarterback Stetson Bennett of Georgia, and linebacker Carlton Martial of Troy.

"You guys deserve this award," Morgan said, gesturing to Bennett and Martial in the front row. "You're damn good athletes. We all showed it all year. ... It's a great honor being able to say I've been with you guys the last two days."

Morgan had 95 tackles while battling through injuries this season, including the same elbow issues that slowed him last year.

The trio stood out from a record number of 89 semifinalists, who were whittled down to 10 semifinalists by the Burlsworth Trophy selection committee.

The three finalists had something in common besides starting their careers as walk-ons. All of them are undersized at less than 6-feet tall, embodying the uphill battle that typical walk-ons face.

The sold-out event at Crystal Bridges was a first-time setting for the Burlsworth presentation.

Last season, the ceremony was conducted solely on a video chat during the midst of stricter covid-19 protocols.

"This is a whole different breed than last year," said Morgan, who joined BYU receiver Dax Milne as finalists with 2020 Burlsworth Trophy winner Jimmy Morrissey of Pittsburgh. "Last year we were on cameras doing Zoom calls and everything.

Added Bennett, "I think what the beauty of this trophy is, it's about football, but what they do with the foundation and helping all the kids, the Burl's kids. "It really is an honor to be recognized for your football achievement, but to be a part of something that's bigger than football, it's been awesome."

Event emcee Jon Williams gave a shout-out to Burlsworth Foundation President Marty Burlsworth for having the Burlsworth Trophy serve as a question on "Jeopardy!" on a recent episode.

Morgan also drew kudos from Williams after Morgan said returning to Arkansas for his super senior season was the second-best decision in his life behind marrying his wife, Sydnie.

The three finalists spent a great deal of time together in the last 24 hours after convening in Northwest Arkansas on Sunday night.

"It's been nice throughout the week getting to know Stetson and Grant," Martial said. "It's nice knowing those guys."

Martial, who has amassed 442 total tackles, including 100-plus in three consecutive years, was nominated three times for the award and was a semifinalist last season. He leads all FBS players in tackles since 2018.

Martial, who had no Division I offers, said he made his walk-on decision at a table at home with his parents with caps of Troy and North Alabama in front of him, drawing laughter and applause.

Bennett, a fifth-year senior, helped Georgia to a 12-1 record and a semifinal matchup against Michigan in the College Football Playoff. He anks fourth in the FBS with a 176.85 passer efficiency rating. A part-time starter in 2020, Bennett has completed 138 of 231 passes (64.1%) for 2,325 yards, with 24 touchdowns and 7 interceptions.

Bennett made his biggest move toward playing time in the 2020 season opener at Arkansas. He subbed in for starter D'wan Mathis with the Bulldogs trailing 7-0 in the first half and helped engineer a 37-10 comeback win.

"I recall things weren't working out for us," Bennett said. "Coach Smart made a switch. Arkansas and Grant were winning at halftime. We led a two-minute drive, kicked a field goal that kind of carried us into halftime and then into the third and fourth quarter where things started clicking a little bit better and we started playing better."

Asked about that performance by interviewer Rick Schaefer, Bennett motioned to Arkansas Coach Sam Pittman in the crowd and said, "Thanks Coach Pitt."

Asked what he would tell a 10-year old kid in his position, Bennett said to go to work, get in the backyard and pass and run and don't sit around and wish.

"My dad used to tell me, "Wish in one hand and spit in he other and see which one fills up faster,'" Bennett said, drawing applause.

"It was a long year from last year being a finalist for this trophy," Morgan said. "I felt like I was a walk-on all over again. The selection committee told me I wasn't good enough so I went back to work."

Print Headline: Long walk worth it