Mel Brooks on his book about his ups 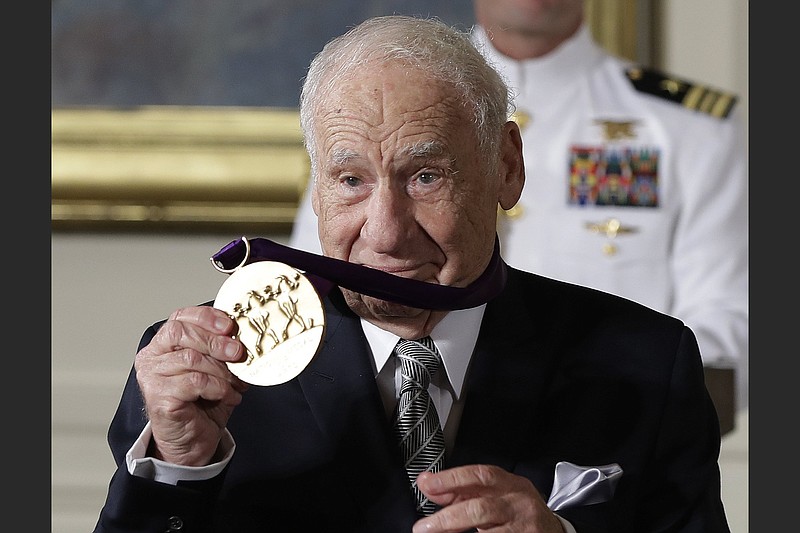 Actor, comedian and writer Mel Brooks holds up the 2015 National Medal of Arts awarded to him by President Barack Obama during a ceremony at the White House in 2016. Brooks released a memoir, “All About Me!: My Remarkable Life in Show Business.” (AP file/Carolyn Kaster)

NEW YORK — Leave it to Mel Brooks to blurb his own memoir.

There, along with laudatory quotes from Billy Crystal, Norman Lear, Conan O'Brien and others is one from "M. Brooks," who hails "All About Me!" as: "Not since the Bible have I read anything so powerful and poignant. And to boot — it's a lot funnier!"

"All About Me!: My Remarkable Life in Show Business" which landed on bookshelves last week, is indeed chock-full of stories, anecdotes and memories from a comedy master of biblical proportions. Brooks, 95, spent much of the pandemic working on the book — a year of remembering everything from getting hit by a Tin Lizzie as an 8-year-old in Williamsburg, Brooklyn, to writing the musical version of "The Producers" with Tom Meehan at Madame Romaine de Lyon in Manhattan over omelets.

"Like everybody else, I've been mostly stuck at home and fed up with the same diet of information and food," Brooks says. "Thank God I could let my mind roam free to remember."

For the first time, Brooks has put down on paper all of his tales, from growing up in Depression-era Williamsburg ("I loved the Depression!" he says cheerfully), serving in the army during WWII, starting out in the Borscht Belt, writing on Sid Caesar's "Show of Shows," launching his 2000 Year Old Man schtick with Carl Reiner, coming up with possibly the greatest comic conceit of all time ("The Producers"), and crafting the films "Blazing Saddles," "Young Frankenstein," "High Anxiety," among others. There are tender chapters on his wife, Anne Bancroft, who died in 2005, and Reiner, who passed away last year. There are jokes and omelets. 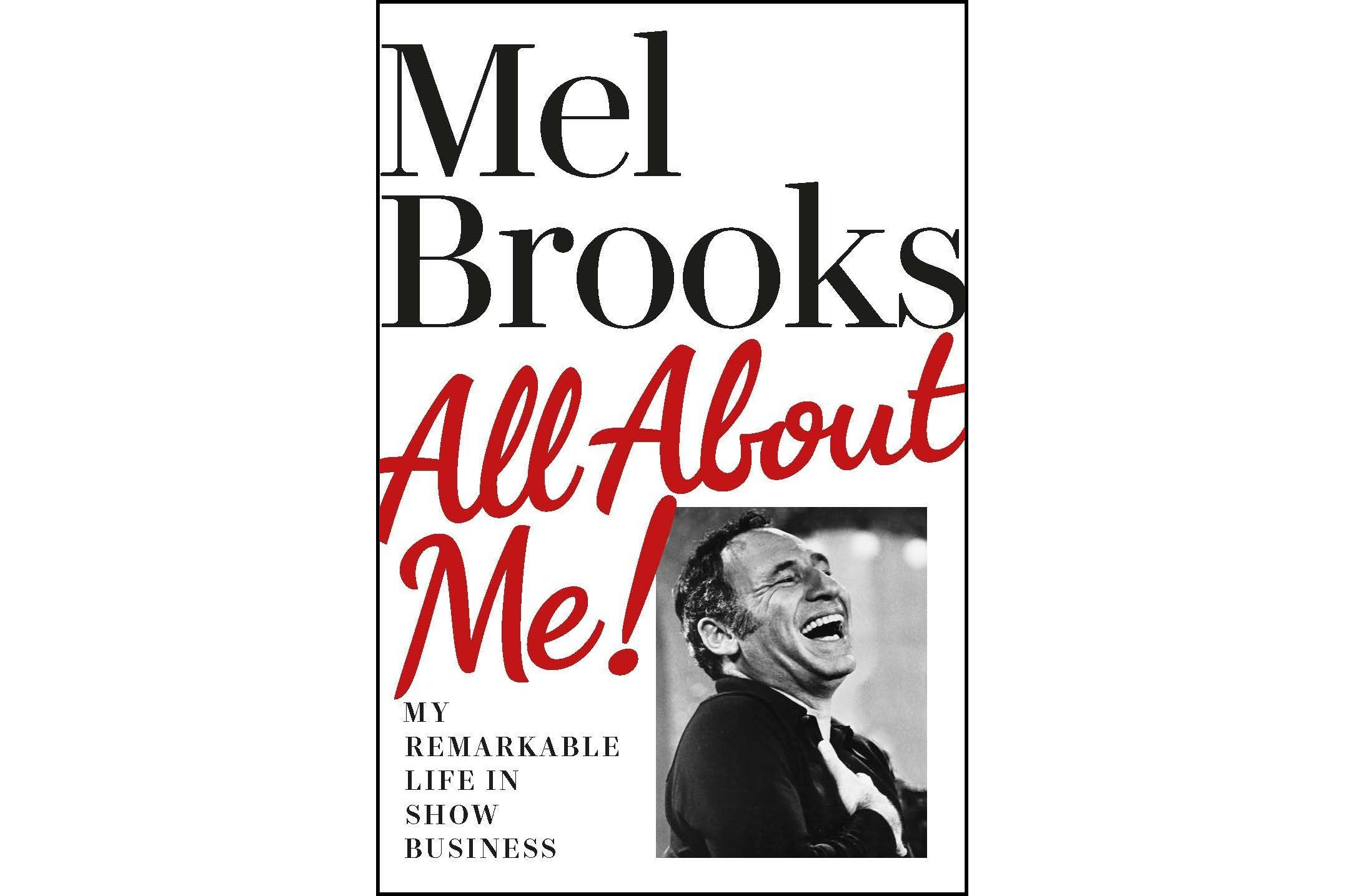 Comedian Mel Brooks was photographed in his New York apartment in May 1966. Brooks has written about his long and storied career in “All About Me!: My Remarkable Life in Show Business.” (AP file)
In a long and lively interview from his home in Los Angeles, Brooks reflected on his book and his life in show business — "the grandest adventure any human being could ever take," he said.

The section on your childhood in Williamsburg, Brooklyn, is especially vividly and fondly recalled. You write that while many think a life in comedy springs from pain and a difficult childhood, for you ...

I wanted to keep the party going. I wanted to keep the happiness and joy and explosions of laughter going into a dour part of our lives, not our childhood anymore. I was once interviewed and the guy said, "What was the happiest part of your life? Was it winning the Academy Award? Was it marrying Anne Bancroft?" I said no, not at all. It was my childhood. From about 4 or 5 to 9, it was the most exciting, happiest, joyous life that anyone could experience. The guy said, "What happened at 9?" I said, "Homework." I realized the world wanted something back. To this day, it's still a bad thing. Homework is a bad thing. It takes away precious minutes from your childhood.

Depending on laughs for happiness can lead to a lot of heartache. Was there any downside to needing that response?

Oh, yeah. When stuff didn't work. When you worked so hard on an idea or a project and the audience just said: No, thank you. There was plenty of heartbreak right there. When you had a show on television like "Get Smart," it was dropped after the first year. ABC just said no second year. There's ups and downs. I didn't write a lot of the downs in the book. Why bring the reader down when there's so many ups to talk about?

Do you remember your last conversation with Reiner before his death last year?

Yeah. The day he died, I said, "Carl, you're eating two hot dogs." He said, 'They ain't gonna bother me. I love hot dogs and hot dogs love me." But it wasn't true. By that night, the hot dogs had done him in.

Some comedians have lamented that today's audiences are too sensitive. As someone who often pushed boundaries of what was acceptable, what do you make of these cultural battles in comedy?

You've got to be careful. When things stir up people to great emotion, I stay out of that. I'm very careful and stay out of those. I don't ever take sides because everybody's right. The people who make fun of something that should not be made fun of are right. And the people who are hurt because they're trashing something that's so important to them, they're right. They're all right. Stay back. Stay away.

But you also weren't timid about subjects some considered off limits like mocking Hitler and the Nazis in "The Producers" or the language of "Blazing Saddles."

I was lucky. I was politically incorrect and I didn't know it. I didn't know it, so I did a lot of great stuff. Then it became politically incorrect, like the N-word in "Blazing Saddles." Richard Pryor was writing it with me. He just loved using the N-word because it was all true — the bad guys used it against Blacks. We didn't think anything was wrong until later. You've got to say maybe it was used too much. Anyway, we were kids and it worked. It worked when it worked. I don't think I could do those scenes in "Blazing Saddles" today. I don't think I could get away with it. I think I'd offend too many people.

Do you think about your legacy at all?

Oh, I don't think about that. I just think: Buy another book.

In a great 1980s sketch, you created a coin-operated gravestone for yourself that played a videotaped message that began: "I was Mel Brooks, one of the funniest little Jews to walk the Earth." Do you think much about death?

No. I gave up after 60 thinking about it because if I did, I'd be thinking about it all the time. So I don't think about it much. When and if it happens it's going to be a sad day — for everybody but me. (Laughs) I enjoy living. I'd like to do it as long as I can.