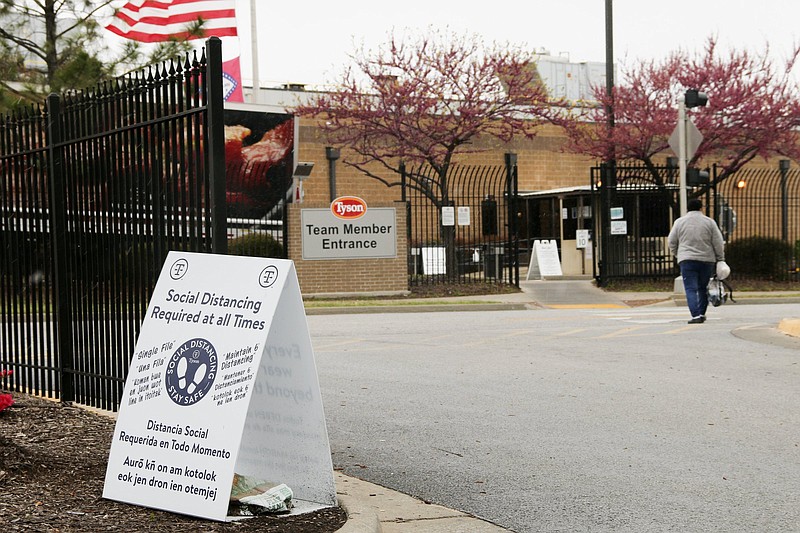 In this image from the Howard Center for Investigative Journalism at the University of Maryland's Philip Merrill College of Journalism, a Tyson employee walks into the team member entrance at the Berry Street location in Springdale, Ark., on April 20, 2021. A sign in their path reads &quot;Social Distancing Required at all Times&quot; written in English, Spanish and Marshallese. (Mary Hennigan/University of Arkansas via AP)

Tyson Foods on Monday said it will award a total of $50 million in year-end bonuses to front-line and hourly employees for their efforts over the past year.

Employees can expect the one-time bonuses, which range from $300 to $700 based on tenure, to be distributed this month.

The seasonal bump in pay is part of Tyson's efforts to attract and retain workers as the industry deals with labor shortages exacerbated by the coronavirus pandemic.

To help the cause, the company has invested more than $500 million in wage increases and "thank you" bonuses in the past year. It is also looking into other ways to support its front-line workforce, including more flexible work schedules and, starting next year, paid sick leave.

Donnie King, Tyson president and chief executive officer, expressed how grateful he was for the workers who followed safety protocols and kept the plants running over the past year.

"While 2021 presented many challenges, our entire team continued to meet them, head on," King said in a written statement Monday.

These wage and bonus increases come as the food industry adjusts to higher beef, pork and poultry prices attributed to inflation and market pressures, including supply chain hiccups that result in delivery delays and fewer items in grocery stores.

Labor shortages remain an ongoing issue and reason for why food companies JBS and Conagra are reluctant to require their workers to get the covid-19 vaccine. Tyson established a company-wide vaccine mandate and enticed workers with extra pay, added benefits and raffles of thousands of dollars if they continued to work.

Jayson Lusk, professor and head of the agricultural economics department at Purdue University, said increased pay and benefits are a common trend right now across the economy, but one that affecting the meatpacking sector heavier than most. Citing federal data, he said the wages of meat processing workers are up 20% since the start of the pandemic.

"Part of that is an attempt to encourage workers to show up and reward workers for extra hours in more challenging conditions," Lusk said.

Other incentives on the table include benefits such as health insurance, tuition payments or free classes. Employers are also exploring ways to make work conditions safer through investments in automation and technology, Lusk said.

Tyson is testing robotics in Springdale that do jobs that are often hard to fill. The company also opened seven health care centers that give workers and their families easier access to medical care at little to no cost. This way workers in rural parts of the country won't have to drive several miles to see the doctor, King said.

"Tyson wants to be the most sought-after place to work, period," he said.

When asked if Tyson offered holiday "thank you" bonuses last year to front-line and hourly workers, a spokesman said in an email that this was "unique to this year" and "in recognition of the efforts by our team members in 2021."