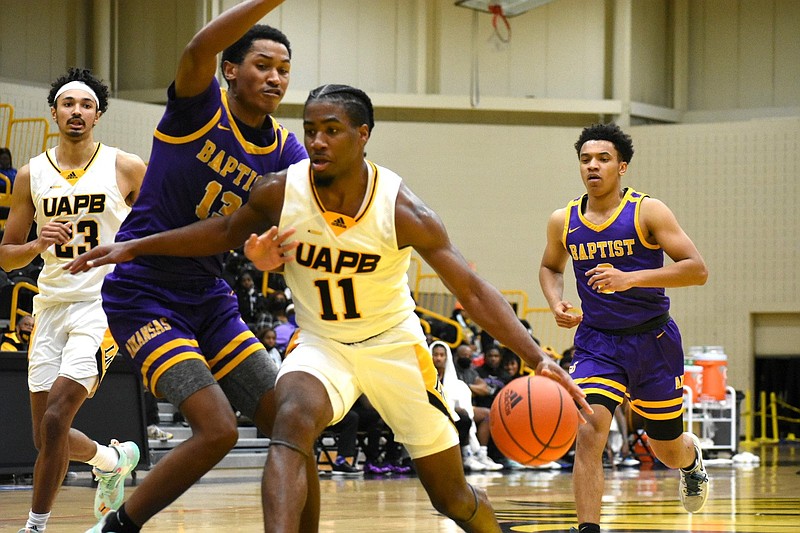 The era in University of Arkansas at Pine Bluff men's basketball has arrived when a Division I opponent from inside the state visits H.O. Clemmons Arena.

First-year UAPB Coach Solomon Bozeman knew the opportunity would come when he took the job in June. When Arkansas State University (6-2) takes the floor tonight, it will be a chance for Bozeman's Golden Lions (1-9) to turn around a season marked by struggles on the road.

"It's going to be a fun, exciting game, any time it's going to be an in-state matchup," said Bozeman, who faced his share of challenges from the Red Wolves as a University of Arkansas at Little Rock point guard in the early 2010s. "I look forward to the challenge. I look forward to the fans being here. It should be a packed house. These games are always crazy, always exciting."

That's how last year's game turned out. UAPB beat Arkansas State 75-74 almost a year ago to the day in Jonesboro with a much different cast -- Shaun Doss led the way with 20 points and Joshuwan Johnson added 16, including the game-winning free throw in the final second.

Arkansas State has won five of six meetings with UAPB all-time, but the two will face off in Pine Bluff for the first time. Tipoff is 7 p.m. with the game to be streamed on the UAPB Sports Network (UAPBLionsRoar.com/watch) and airing on KPBA-FM 99.3 The Beat.

"I'm looking forward to this game," UAPB junior Brandon Brown said. "This is my second home game. We won the first, and we want to keep the streak going."

Brown, a 6-foot-5 guard who transferred from Mississippi's Itawamba Community College, will be one of two known double-double artists on the Clemmons floor, along with second-year Red Wolves freshman Norchad Omier, a 6-foot-7 forward from Nicaragua.

Brown has three games with more than 10 points and 10 rebounds this season and nearly averages that (9.5 points and 8.2 rebounds per game). Bozeman's father Eric mentored Brown as an assistant coach at Itawamba.

Omier went into the week with 18 double-doubles, the third-most in the nation since the start of last season. He is averaging 13 points and 9.1 rebounds per game.

Yet, the Red Wolves' main attraction may be former University of Arkansas guard Desi Sills.

The 6-foot-2 junior guard is leading his hometown team in scoring (14.6 points per game), a season after helping the Razorbacks reach the NCAA Elite Eight.

"It's going to be tough," Bozeman said about containing Sills and Omier. "Desi's a downhill driver, tough scorer, shoot-first guy who wants to put that ball in the basket. That's who he's been his whole life. And then that big kid [Omier] is really, really good. I think he's one of the best bigs in the country. Really nice face-up game, but he's a tough bruiser who can face you up, go over that left shoulder, put it on the floor and can drive you from the perimeter, so he's inside-outside, really skilled, one of the best bigs we'll play this year. We've got to do a really good job containing those two, but not let those other guys get going as well."

Arkansas State is searching for its third win in a row, having knocked off the University of Missouri at Kansas City and University of Central Arkansas.

"We won last year at Arkansas State," Bozeman said, "so they're going to be coming for blood this year."

UAPB is 1-0 at home, defeating Arkansas Baptist College 75-70 on Nov. 29. But the Lions have struggled on the road. UAPB is coming off losses to Big 12 powers Iowa State University and Baylor University.

"I think we did a good job just competing, for the most part," Bozeman said about UAPB's season thus far. "It was some games that got away from us. I think this team, we've just got to keep competing and do the tough things for 40 minutes. If we come out and do the tough things for 40 minutes, we think we can come out and start being victorious in some of these games."