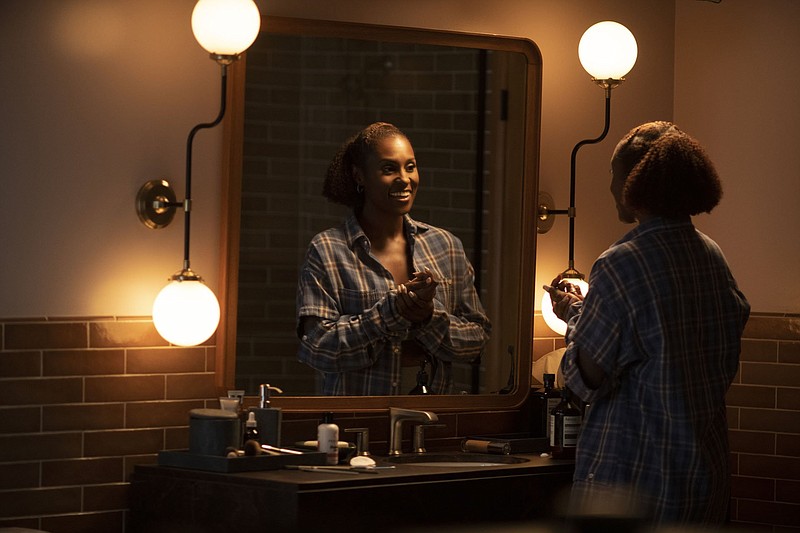 Issa (Issa Rae) is shown in a moment of reflection on “Insecure.” Season 5 is now airing on HBO. (Glen Wilson/HBO)

There's a moment in the Season 5 premiere of "Insecure" when Issa (series creator Issa Rae) talks to her younger self in a mirror, updating a still-in-braces Issa on what she will accomplish in the future and where her most significant relationships stand as she attends her 10-year college reunion. The scene is a variation of one that has played out multiple times across five seasons of the groundbreaking HBO dramedy. These mirror confessionals typically involve goofy, introspective raps, and "throwback" Issa doesn't disappoint. "Let me see them teeth," younger Issa says as grown-up Issa acts as hype-woman, flashing a virtually perfect grin. "Show me how you eat!"

The scene marks a full-circle moment for Issa, who was perpetually underemployed in the show's first few seasons and now owns a burgeoning event-planning business. It's also a full-circle moment for Rae, who first channeled her anxieties through freestyle rap breaks in "The Misadventures of Awkward Black Girl," the beloved internet series she introduced in 2011.

"Awkward Black Girl" earned Rae an enthusiastic following, particularly among young, Black millennials who connected with a protagonist who weathered microaggressions at work while also agonizing over exactly when to greet a co-worker approaching from the opposite end of a long hallway. "I'm awkward and Black. Someone once told me those were the two worst anyone can be," Rae's character, J, says in the first episode. "That someone was right."

Weeks after the show debuted on YouTube, the show proved so popular that Rae took to Kickstarter to support increased production costs. "I wanted to change the perception and portrayals of Black women in television by creating characters and story lines that moved beyond stereotypes and one-dimensionality," she explained in the campaign summary.

As "Awkward Black Girl" garnered praise and accolades, including a Shorty Award for best web series in 2012, fans clamored to see Rae's comedy move beyond the internet. She snagged a deal to create an unrelated pilot for ABC through Shonda Rhimes' production company, but the project ultimately wasn't picked up. "I compromised my vision, and it didn't end up the show that I wanted," she recalled in a 2015 New York Times Magazine profile. "It wasn't funny anymore."

Though HBO announced it was developing a comedy from Rae in 2013, it would be more than three years before "Insecure," co-created with veteran producer Larry Wilmore, premiered. The show made Rae the first Black woman to create and star in a premium cable show. "Isn't it sad that it's revolutionary?" she told NPR. "We don't get to just have a show about regular Black people being basic."

Rae also lamented superficial comparisons to Lena Dunham's "Girls," another HBO dramedy about millennial women that otherwise had little in common with "Insecure." (For starters, Issa is 29 when "Insecure" begins; Hannah declares her desire to be "a voice of a generation" at 24 on "Girls.") More apt comparisons have been made between Rae's and Dunham's respective trajectories in the entertainment industry, particularly after the Hollywood Reporter, in a 2017 article, recalled the page-and-a-half pitch — devoid of character names or a plot summary — that led to "Girls."

Rae's hard-fought journey to Hollywood is arguably part of the fabric of "Insecure," not least because it's representative of experiences the show has authentically explored — from Issa's job frustrations and side hustle as a Lyft driver to the varying struggles Molly (Yvonne Orji) faces at different law firms, one predominantly white, the other predominantly Black. Any hand-wringing over how universal the show may or may not be misses the point: "Insecure" is relatable because it's about real life. But it's also very specifically about Black young men and women living in South Los Angeles.

The series also boasts a distinctly Black pop culture IQ, making show-within-a show references that don't so much break the fourth wall as wink at its audience. There are callouts to other iconic Black series including "Scandal," "Martin" and "Living Single," as well as nods to "Girlfriends," the pioneering UPN/CW sitcom that Rae credits as an influence and once counted "Insecure" showrunner Prentice Penny as one of its writers.

Though "Insecure" peers at larger slices of life than "Awkward Black Girl," it's still awkward (not to mention, hilarious) at heart. In one recent episode, Issa struggles to navigate her way around a bed being rolled down a hospital hallway, leading to the soul-crushing two-step that occurs when two people facing each other both zig when one of them should have zagged.