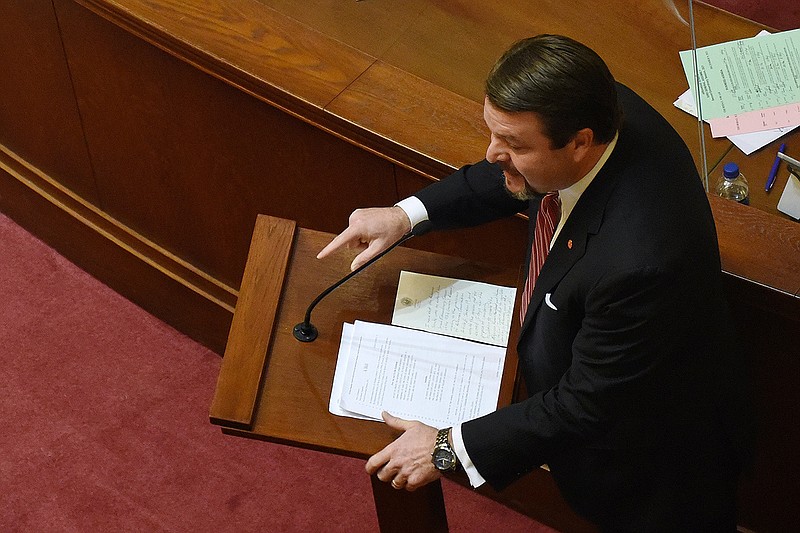 Arkansas lawmakers adjourned a three-day special session on Thursday despite efforts by some to extend their time at the state Capitol.

Gov. Asa Hutchinson called the GOP-controlled General Assembly into its second extraordinary session of 2021 starting Tuesday, having issued a proclamation calling on lawmakers to consider a state income tax cut plan and several other matters.

Under the state constitution, legislators may take up bills not on the governor's special session agenda after finishing the items on the governor's call by passing a resolution with a two-thirds vote in both chambers.

This week, a number of resolutions were filed by Republican lawmakers with the aim of extending the session to consider measures including an abortion bill with a Texas-style civil cause of action, a ban on critical race theory in public schools and a tax credit for full-time law enforcement officers.

However, measures to end the session succeeded in both chambers before any of those resolutions could be considered.

In a 23-11 vote, the Senate approved a substitute motion by Senate President Pro Tempore Jimmy Hickey, R-Texarkana, before the chamber could consider a motion by Sen. Jason Rapert, R-Conway, that would extend the special session to consider Rapert's proposed Arkansas Human Heartbeat and Human Life Civil Justice Act. The bill would add a civil cause of action provision to Arkansas' near-total abortion ban, which has been enjoined by a court order.

Hickey said if the House and Senate voted to extend the special session, any lawmakers could file any number of bills to be considered. The Senate would also need to pass an appropriation of $78,131 to cover the chamber's expenses of per diem and mileage, he said.

Rapert urged senators to vote against Hickey's motion. He said it is estimated that Texas saved more than 3,000 babies during the past 90 days with its civil cause of action law.

"When we see a tool that can save lives, we stand and use that tool," Rapert said.

Afterward, Senate Republican leader Scott Flippo of Mountain Home said he voted for the motion to adjourn because there was a strong agreement among the majority of the 26-member Senate Republican Caucus and the Senate that it was time to wrap up the special session.

Sen. Bill Sample, R-Hot Springs, said voting to adjourn was the right thing to do.

"The motion that Sen. Rapert made wasn't about abortion. It was about a political campaign game and so we are not up here about campaigns," Sample said, adding that he didn't like the "vigilante" part of the Texas law.

Rapert is seeking the Republican nomination for lieutenant governor in 2022.

A short time after the Senate adjourned, the House passed House Resolution 1001 by House Speaker Matthew Shepherd, R-El Dorado, to adjourn the lower chamber in a 61-32 vote.

Shepherd said the Senate already having adjourned meant there would be practically no reason for the House to continue meeting.

Rep. Mary Bentley, R-Perryville, tried to make a substitute motion to extend the session to consider the House version of Rapert's abortion bill, but House Speaker Pro Tempore Jon Eubanks, R-Paris, said it was not a proper motion because it was not a motion of higher precedence than the proposal to adjourn.

Bentley then spoke against Shepherd's resolution.

"There's never a wrong time to do the right thing, and we can save children's lives here in Arkansas," she said.

In a written statement issued by his campaign, Rapert called Thursday a sad day for the unborn in Arkansas.

"The Legislature had the ability to protect unborn Arkansans today and not wait for months for the United States Supreme Court to render its opinion," Rapert said. "It is unfortunate that the political will needed from the legislative branch to protect unborn Arkansans from the crime against humanity that is abortion was ceded to the political agenda of the governor."

"The people of Arkansas were the winners in this special session with the historic tax cuts and the fact is that Sen. Rapert could not win support from this colleagues for his bill. Instead of working with his colleagues Sen. Rapert chose to politically grandstand and that rarely leads to good legislation," he said.

Print Headline: Session wraps up after attempts to extend it fail