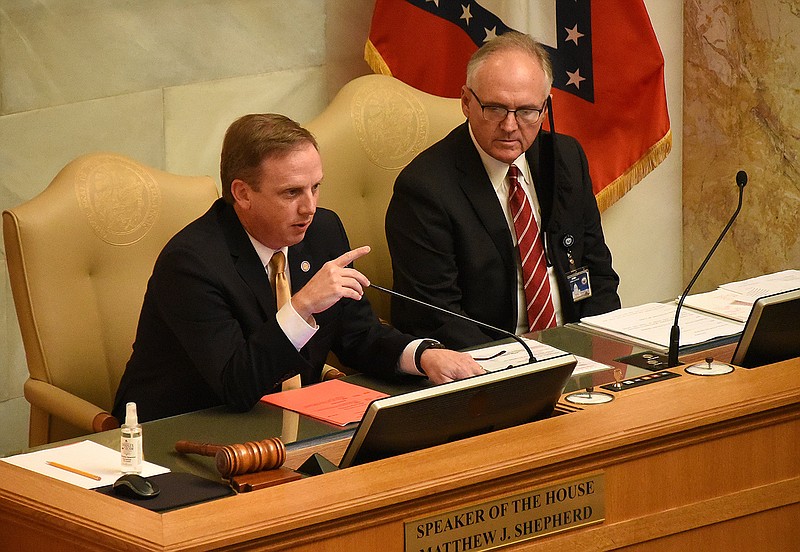 The Arkansas House and Senate voted Thursday to send the governor identical bills that will allow the state's chief fiscal officer to transfer $50 million from the long-term reserve fund to the general allotment reserve fund for economic development incentives.

Under the new laws, the chief fiscal officer, after deciding that funding for incentives is needed, may transfer that money to the Quick Action Closing Fund for economic development incentives for U.S. Steel's proposed expansion in Mississippi County. If U.S. Steel receives the money, the funds would go toward infrastructure for the site of the proposed expansion, said Rep. Lane Jean, R-Magnolia.

The long-term reserve fund is expected to receive that $50 million from the state's property tax relief fund by the end of this year, Hickey told the Joint Budget Committee on Tuesday.

Of that, $17.4 million will be transferred into a restricted reserve account, increasing its balance to $28.5 million. A majority vote of the Legislative Council is required to spend the account's money, Hickey said. The bills will transfer the remaining $14.2 million into a different restricted reserve account, increasing that balance to $50 million, which requires a three-fifths vote of the Legislative Council to spend, he said.

The Arkansas House on Thursday voted to send the governor a bill that will grant up to $3 billion in additional spending authority for the state Department of Finance and Administration disbursing officer for state agencies, constitutional offices and institutions to use federal American Rescue Plan funds.

The bill is Senate Bill 3 by Sen. Jonathan Dismang, R-Searcy. The bill is now Act 6.

State agencies, offices and institutions will continue to be required to get the approval of the Legislative Council for their spending plans of American Rescue Plan funds, Hickey said.

The Arkansas Senate on Thursday barely approved a bill aimed at clarifying the law enforcement authority of security personnel for the House and Senate.

Shepherd said the bill was intended to clarify the role of the House sergeant at arms as a law enforcement officer. The speaker said he was looking at ways to clarify the requirements for the position because of concerns raised in the Senate.

Sen. Bill Sample, R-Hot Springs, said the bill is designed to allow the House sergeant at arms, who is a retired federal law enforcement official, to protect lawmakers if they are accosted.

The House and Senate on Thursday approved identical bills that fix a drafting issue in a 2021 law that covers limited liability companies.

Act 1041 of 2021 inadvertently provided for the repeal of the Small Business Entity Tax Pass Through Act to become effective 90 days after April 28 rather than on Sept. 1 to correspond with the effective date of the new law.

Identical bills that will repeal a 2021 measure establishing pharmaceutical discounts for insulin cleared the House and Senate on Thursday.

The Senate voted to send House Bill 1005 by Rep. John Payton, R-Wilburn, to the governor, and the House did the same with Senate Bill 7 by Sen. Dan Sullivan, R-Jonesboro. The bills are now Act 13 and Act 9, respectively.

Sullivan said the aim of the insulin law, Act 1104, was to provide pharmaceutical discounts to all Arkansans.

But state officials said the law would increase costs for the state's health insurance plans for public school, and state employees and retirees.

Sullivan said these identical bills will repeal that law and allow lawmakers to consider another bill next year to provide the discounts to all Arkansans.

The House and Senate on Thursday gave final approval to identical bills correcting language in a law establishing the Independent Tax Appeals Commission.

House Bill 1006 by Rep. Joe Jett, R-Success, and Senate Bill 2 by Sen. Jonathan Dismang, R-Searcy, would provide for the commissioners who are appointed during the creation of the commission to be given terms of differing lengths so they don't all cycle off the commission at the same time. The bills are now Act 14 and Act 5, respectively.