A limited number of positive covid-19 tests are genetically sequenced by Janelle Jessen | December 12, 2021 at 1:00 a.m. 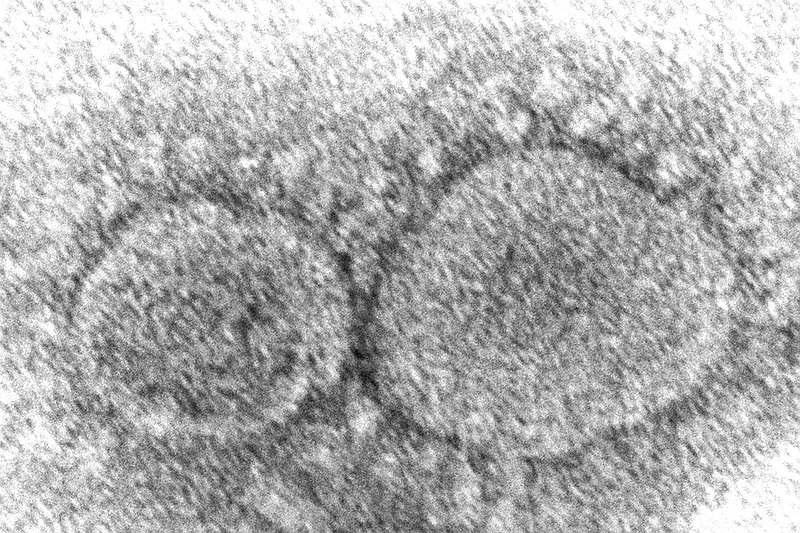 FILE - This 2020 electron microscope image made available by the Centers for Disease Control and Prevention shows SARS-CoV-2 virus particles which cause COVID-19. The World Health Organization has appointed an independent scientific panel to advise on whether vaccine shots need reformulating because of omicron or any other mutant. (Hannah A. Bullock, Azaibi Tamin/CDC via AP, File)

The Arkansas Department of Health is responding to omicron by genetically sequencing samples from positive covid-19 tests and following federal guidelines for quarantining travelers from countries known to have widespread infections, according to officials.

However, the number of positive tests that are genetically sequenced are limited due to cost, the time sequencing takes and other factors, according to Dr. Naveen Patil, medical director of the department's infectious disease branch.

No cases of omicron had been detected in Arkansas as of Friday, but cases had been identified in 23 states, including Missouri, Mississippi and Louisiana, according to the federal Centers for Disease Control and Prevention website.

The Health Department collaborates with the CDC and other international organizations to track covid-19 variants as well as other viruses and organisms, Patil said.

Health officials have been tracking the delta variant for the last six or seven months and it's the predominant variant in Arkansas and most parts of the world, he said.

A total of 99% of cases genetically sequenced in Arkansas in the last 30 days and 97% of cases in the U.S. were the delta variant, according to the Department of Health's Dec. 7 Covid-19 Variant of Concern Case Report.

The Arkansas Department of Health sends about 5% to 10% of positive covid-19 tests from its lab for genetic sequencing at the University of Minnesota Genomics Center, Patil said.

The center provides strain sequencing for Minnesota, South Dakota, Missouri and Arkansas, according to director Kenny Beckman. It sequences between 500 and 1,000 samples a week, he said.

Hospitals and clinics around the state also send samples for genetic sequencing to the various labs they use and the results are reported back to the health department, Patil said.

Slightly more than 2% of positive covid-19 tests in Arkansas, including those from the department's lab and from hospitals and clinics, have been sent for genetic sequencing since January 2020, according to the CDC.

Nine states have sequenced fewer than 2% of positive covid-19 tests since January 2020, including South Dakota, Iowa, Missouri, Oklahoma, Ohio, Kentucky, Tennessee, Alabama and Mississippi, according to the CDC.

Samples selected in Arkansas are chosen by convenience rather than at random, according to the Dec. 7 report.

Genetic sequencing is expensive and time-consuming, Patil said. It costs $115 to sequence each sample, although earlier this year a CDC program paid for sequences for nine central midwest states including Arkansas, said Beckman.

States like Arkansas that send samples off to designated national labs get results back in 10 to 14 days, depending on the volume of samples, Patil said. Some states that have access to their own genetic sequencing labs may get results back slightly sooner, he said.

The department's goal is to add its own sequencing capabilities in early 2022, said Danyelle McNeill, public information officer.

Since genetic sequencing takes several weeks, news of the omicron variants spread around the world is delayed, Patil said. The cases discovered around Thanksgiving time in South Africa likely started a month ago, he said.

Because of the delay, it's very difficult to know where people might have already carried the virus, Patil said. As results from the samples that were collected two or three weeks ago begin to come back, they will give a better idea of whether Arkansas has any cases, he said.

While information about the omicron variant is evolving, health officials believe it might be more infectious than the delta variant, but the disease may not be as severe, Patil said.

Preliminary studies from Pfizer also suggest that three doses of vaccine -- the primary series plus a booster -- provide as much protection against omicron as two doses did against previous variants, said Dr. Marti Sharkey, Fayetteville public health officer.

Sharkey said local health officials like herself focus more on preventing spread of the virus than tracking variants.

The vaccine is still the best protection against the omicron variant, Patil said. Social distancing and masking are also proven ways to prevent spread of the virus, he said.

"It's not just antibodies," he said. "A lot of things happen in the body's immune system (after vaccination) that make you prepared once you get an infection."