'It felt like it was burying us': Northeast Arkansas climbs out from deadly tornadoes 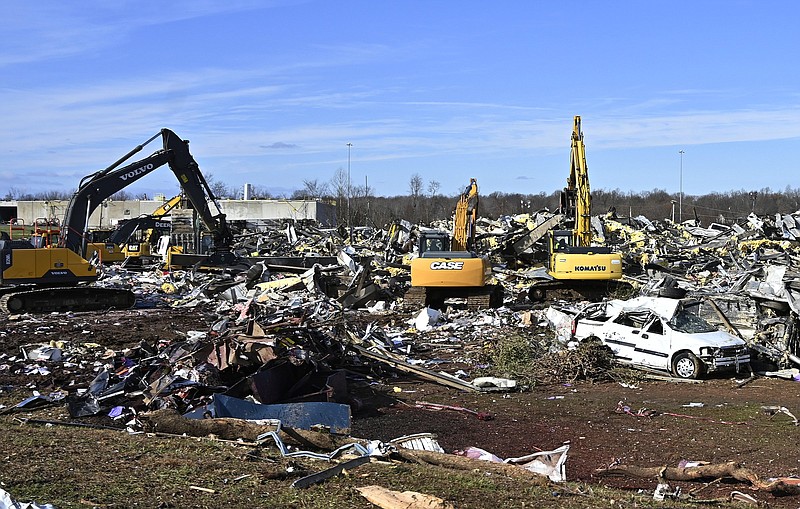 TRUMANN -- The second Jada Madden sat down in her bathtub with her fiance and their 7-month-old son, their house disappeared from above them.

"It felt like it was burying us underneath the ground," she said Saturday -- a day after tornadoes ripped through this Northeast Arkansas town and others around it before continuing its deadly march east.

[Video not showing up above? Click here to watch » arkansasonline.com/1212aerial/]

Madden's feet were stuck in the rubble, so her fiance climbed out first, carrying their baby, before helping her up. First responders arrived in their neighborhood on the east side of Trumann shortly afterward.

[Video not showing up above? Click here to watch » arkansasonline.com/1212harris1/]

Madden's house was one of more than 200 damaged or destroyed by a tornado in Trumann on Friday night, according to Arkansas Recovery and Coordination Center spokeswoman Rebekah Magnus.

Mayor Barbara Lewallen said Saturday that she was grateful there were no fatalities in the city.

Roughly 25,000 Arkansans had lost power because of the tornadoes, as of Saturday morning.

Debris littered the rows of crops on the outskirts of Monette on Saturday.

Some roads remained closed in Trumann, and the storm left lumber from the nearly two dozen-homes neighborhood it leveled stacked in a yard -- the stack reaching the height of the weather-beaten residences nearby.

Gov. Asa Hutchinson and A.J. Gary, director of the state's Division of Emergency Management, visited a destroyed nursing home in Monette on Saturday and observed the wreckage in Leachville via helicopter.

"Probably the most remarkable thing is that there was not a greater loss of life [in the region]," Hutchinson said in a news conference.

[Video not showing up above? Click here to watch » arkansasonline.com/1212harris2/]

He declared a state of emergency Saturday and urged residents to report damaged property to their insurance providers and local emergency management agencies in case the region qualifies for federal disaster relief funding.

President Joe Biden said Saturday afternoon that the federal government will do what it can to help the regions affected by the tornadoes.

Friday's tornadoes were the first fatal twisters in Arkansas since 2018, according to the National Oceanic and Atmospheric Administration.

ORIGIN OF THE STORMS

On Friday, temperatures in Arkansas rose into the 70s as warm, moist air from the Gulf of Mexico moved into the state, mixing with wind energy to create the conditions for severe thunderstorms.

The National Weather Service said a tornado that began in Arkansas proceeded to tear through Missouri, Tennessee and Kentucky.

Some of the storms that turned into the super-cell thunderstorms that generated the tornado began just southwest of Little Rock, said Thomas Jones, a meteorologist with the National Weather Service in Little Rock.

"Here in Arkansas, we were basically the starting pin," Jones said.

The storms moved northeast across Little Rock and along Interstate 30, strengthening in Northeast Arkansas and continuing across the Mississippi River while producing tornadoes.

One of the three tornadoes was an EF2 twister in Augusta, with wind speeds ranging from 111-135 mph, injuring three people. The tornado was 500 yards wide with a path length of 8.6 miles, according to reports.

For Northeast Arkansas, it might have been the same tornado that tore through the region and moved into Missouri, Tennessee and Kentucky, but as of Saturday evening, data was not yet conclusive, according to Michael Hill, lead forecaster with the National Weather Service in Memphis.

"Everything is pointing to it being one tornado the entire time, but, you know, until we get out there and really look at it we can't absolutely, officially say yes," Hill said.

Severe weather is common in Arkansas this time of year, as November to January serves as the state's secondary season for severe weather.

But while tornadoes in December are not rare, the intensity of Friday night's storm was.

"It was not your run-of-the-mill simple tornado," Hill said. "This was a very strong, large and violent tornado that had all the ingredients to itself to continue to get stronger and stronger as it moved to the northeast. So it was definitely one that will go in the record books."

Trumann firefighters were headed to assist Monette on Friday when they were informed of the destruction in their own city, including at least 20 houses on Wayne Street, where Madden and her family lived.

Madden's uncle is a firefighter, and she said she had "never been so happy" to see him when the trucks arrived.

Samantha Harris and her mother, Teresa Green, also lived on Wayne Street and were not home when the tornado struck. Much of the debris in their yard was the remnants of the house across the street, she said.

Harris and Green managed to salvage some clothes and keepsakes, and find one of their three pets in the rubble. The other two pets were still missing Saturday afternoon.

"We're going to come back tomorrow, try to get some more stuff and just keep truckin'," Harris said.

Lewallen said the damage throughout Trumann is "going to take a while" to fully assess and clean up. Restoring power, running water and the sewer system were top priorities Saturday.

"The big thing is we need the citizens to have shelter, access to help, do whatever we need to do to get them relocated to someplace that can help them," she said.

The Craighead County tornado touched down at 8:33 p.m. Friday, according to the National Weather Service.

In neighboring Mississippi County, Leachville's Dollar General store, the only source of groceries in the city of fewer than 2,000 people, collapsed in the tornado, killing one person.

Without the Dollar General, "we're screwed," said Molly Johnson, who has lived in Leachville her entire life.

Johnson's house just up the road from the store was "totaled" and "not fixable," she said. The tornado left a hole in the front of the house and broken glass everywhere. She salvaged some of her furniture by moving it away from the windows.

She and her son, who had just returned home from his first semester of college, huddled with their cat in the closet and put pillows over their heads, she said.

"It was this pressure that you would not believe, and you could feel the house pick up and move from its foundation," Johnson said.

They left the house through the back door, climbed through the debris pile of trees in the yard and slept at a neighbor's house. Johnson said she does not know where they will stay now.

The tornado moved to Leachville through Monette, where one of the 67 residents of the Monette Manor nursing home died Friday night.

Owner Rick Sampson said the nursing home's staff of more than 80 people rallied to evacuate the building, and the local school district provided buses to transport the nursing home residents to shelter at the gym inside Buffalo Island Central Senior High School.

Initial reports Friday suggested that about 20 people were trapped in the nursing home. Sampson said that was not quite accurate, but "it took a little while to get to people."

Sampson has run the nursing home for 20 years.

"It's a tremendous loss, it's something we've been a part of for a very long time, and seeing it in the condition it's in now is pretty depressing," he said.

Crawford, whose district includes Northeast Arkansas, said in a news release that his office "will continue to assist those who have experienced the worst of these storms in any way we can" and thanked first responders for their actions Friday night.

Many houses in the neighborhood across the street from Monette Manor were damaged, including Monette firefighter Jordan Wood's house, which lost all of the shingles on the roof. His neighbors worked together to secure a tarp over the roof Saturday morning.

Wood described the tornado as "a battering ram," and after it passed, he went from house to house checking on the neighbors until he got to the nursing home.

"It was probably one of the worst things I've ever encountered in my life," he said. "You have helpless people that are probably 90% wheelchair-bound with the roof falling in and they couldn't get out."

Wood and Day, the county judge, said Craighead County residents do their best to support their neighbors in tough times.

Friday's twisters came not quite two years after an EF3 tornado leveled parts of Jonesboro, one of the Craighead County seats. While there were no fatalities in that storm, more than 130 homes were destroyed and nearly two dozen people were injured.

Day said as far as he was aware, no one in Craighead County lost their home completely on Friday.

"You look at Monette Manor and you just can't believe there were survivors, so we're very grateful it wasn't worse than it was," he said.