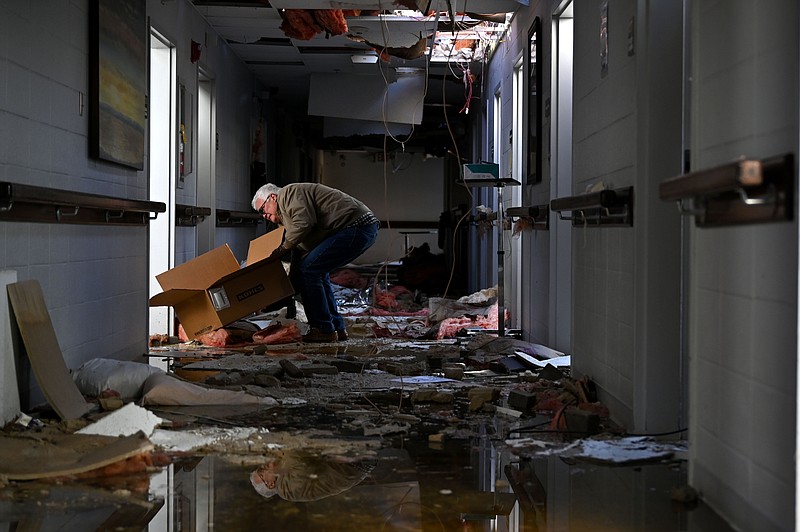 MONETTE -- "It's like a war zone. That's the only way to describe it."

Those were the words Sunday of Rick Sampson, the owner of Monette Manor Nursing Home in Monette, as he surveyed the wreckage of his 67-bed facility that was destroyed Friday night at the front end of what the National Weather Service says may be the longest-track tornado in American history.

One person died at the nursing home, and another person was killed at a store in nearby Leachville. Several others were injured. Although the low number of fatalities in Arkansas is being called miraculous by some, Sampson looked over the damage and mourned over what the residents -- whom he described as being like family -- had suffered.

"No, it doesn't feel like a miracle," he said. "But we are so fortunate we were able to get everyone else out."

Sampson described the scene Friday night as chaotic, but he said the nursing home was blessed with both emergency responders on the scene and civilian volunteers trying to help out.

"We had tremendous support from all the fire departments, the local people, the state police, everyone," he said. "It was just amazing."

The scene on Sunday had a surreal atmosphere as a few people dropped by the nursing home to retrieve loved ones' belongings. The devastation was in stark contrast to the blue sky, sunshine, cool fall temperatures and gentle breeze that blew across the landscape.

A huge oak tree had smashed into the rear of the nursing home. The roof was ripped away, and insulation, acoustic tiles, furnishings and Christmas decorations littered the interior. Outside the main entrance, a bedraggled Christmas wreath still hung on the facade. About a dozen cars were scattered about the parking lot, windows smashed, one with a steel beam hurled through its roof.

A couple of large, roof-mounted HVAC units were scattered in the parking lot along with wheelchairs -- some of which blew out of the building, others of which were abandoned as residents were brought out and placed into vehicles. Near the rear entrance of the building lay a toolbox that appeared to have been ripped from the bed of a pickup sitting next to the sidewalk.

In a small copse of trees near the street in front of the nursing home, a large cargo van had smashed down on top of the trees, breaking what branches the wind had spared.

"That cargo van was parked out back," Sampson said. "The only way it could have gotten there was to go over the building."

"Obviously, it was a Friday night and hard to deal with, but everybody came together," he said.

"I never dreamed this tree would go down," said Paula Ford of Jonesboro as she and her husband, Ronnie, gathered her mother's belongings from the nursing home. Ford said her mother, Violet England, 85, who has dementia, was not injured. When Ford arrived from Jonesboro to get her, England seemed surprised to see her, Ford said.

"You're here," Ford said her mother noted in greeting her. Ford had run into the parking lot of the nursing home to find England sitting outside, bundled up "like a bunny rabbit."

"That tree" was the enormous oak, ripped up from the ground like a sapling and draped across the roof at the rear of the building.

Ford said she had to wheel her mother about a quarter-mile to a location across the highway where Ford had parked.

"We got her to the truck and were going down the highway, and she looked around and said, 'Boy, it sure is dark out here,'" Ford said. "I told her, 'Well, there's no electricity,' and she said, 'Well, that makes plain sense,' and from there she just enjoyed the ride."

At that point in her retelling, Ford's voice broke and she began to tear up.

"She asked where my uncle, his name was Kenneth, and where my brother, David, were," Ford said. "They had both passed ... and she said, 'Well, they were both with me during the storm.' I told her that's probably why she was as safe as she was, not a scratch, not a bruise, nothing on her. She said, 'Well, they were with me,' and I told her that I believed her. She was safe, she wasn't hurt; there was nothing wrong with her, so they probably were with her. My dad, too."

According to The Washington Post, the weekend storms may have brought the deadliest-ever outbreak of December tornadoes in the Midwest and Tennessee Valley, with areas of six states devastated through Friday night and Saturday.

"The vicious centerpiece was a monster supercell that carved an hours-long, 250-mile path from eastern Arkansas to western Kentucky," The Post reported, with dozens of people killed in Kentucky.

Shannon Davis, an employee at Monette Manor, was at work when the tornado struck. Although she was supposed to get off at 7 p.m., she said, the tornado warning came through about 6:30. Not long after she checked her watch at 7:22 p.m., the storm hit.

Davis said she and two other employees moved the residents to a central area and then took shelter in a safe room, and shortly after, the storm arrived.

As she emerged from the room, she said, the storm began to re-intensify.

"It started making sounds again," she said. "It was like it happened again. There were like two different situations."

Tony Benham, who lives in the neighborhood adjoining Monette Manor, said he was trying to get his family into a storm shelter across the road from his home when the storm hit. He had gotten his wife and children into the shelter and had gone back to get his mother, who is bedridden with heart disease, when the tornado struck.

"The whole sky was bright blue," Benham told an Arkansas Democrat-Gazette photographer. "I figured it was too close, so I told my wife I love her and shut the shelter door."

Of his mother, Benham said, "I came into the world with her, and I was going to go out with her," so he laid on top of her to protect her from the debris. He said he held his mother until he was knocked unconscious when he was hit by a kitchen table.

Both survived, as did the rest of Benham's family.

One Monette resident, who declined to give his name, said he lives less than a mile from the nursing home. And while he had no idea of the havoc being wreaked just to his south, he said it was obvious that the Mississippi County village of Leachville was in trouble.

"There was a lot of lightning at my house, but I really couldn't tell anything was happening back toward Monette," he said. "But when I looked east toward Leachville, the sky was boiling and the lightning was nonstop. It was obvious something was going on there."

Alan Austin, chief of police in Leachville, was manning a roadblock Sunday at the intersection of Arkansas 18 and Main Street going into the village.

"There's debris all over town," Austin said. Just a few miles from the highway, near the downtown area, power crews worked to clear debris and to restore power.

"We're really trying to keep rubberneckers out," Austin said. "I appreciate their concern, but we've got a hundred and something electrical company trucks out here and they really don't need to be dodging people just out here looking around."

Austin confirmed that one person was killed when the Dollar General store was hit and that another was injured, but he said no identifications were being released as of Sunday afternoon.

In Trumann, authorities believed at least 200 structures were damaged, but a complete count was not available.

About 1 p.m. Sunday, Arkansas Department of Emergency Management Director A.J. Gary was surveying the damage in Trumann but said a complete assessment of the damage would take more time.

Lt. Ryan Price with the Trumann Police Department said emergency responders came from as far away as Batesville to assist Friday night.

"It's just been a huge outpouring of support," he said.

Terah Redman, wife of Trumann Police Chief Jon Redman, has been coordinating relief efforts in the hard-hit eastern Arkansas city. She said there are a lot of people asking how they can help and a number of ways in which they can assist.

"Right now we need people who can deliver food," Terah Redman said. "People have been sending clothes and we've got plenty of that, but right now we need towels, baby bottles, D-cell batteries for flashlights, electric lanterns and blankets."

Money, she said, is also welcome.

"We've got 30 families with no place to go so far," Redman said. "Every morning, those who cannot pay for a hotel room, we're covering that cost for them. We're also covering the cost of detergent, fabric softener, and quarters for those who need to use a laundromat."

Steve Patterson, an American Red Cross volunteer from Kansas City, Mo., said that of all donations, cash is king.

"Money is always best because it can be used for whatever is needed," he said.

Individuals wishing to donate to assist victims of the tornado may contact the American Red Cross or emergency management officials in Craighead, Poinsett or Mississippi counties in Arkansas.

Information for this article was contributed by Stephen Swofford of the Arkansas Democrat-Gazette.