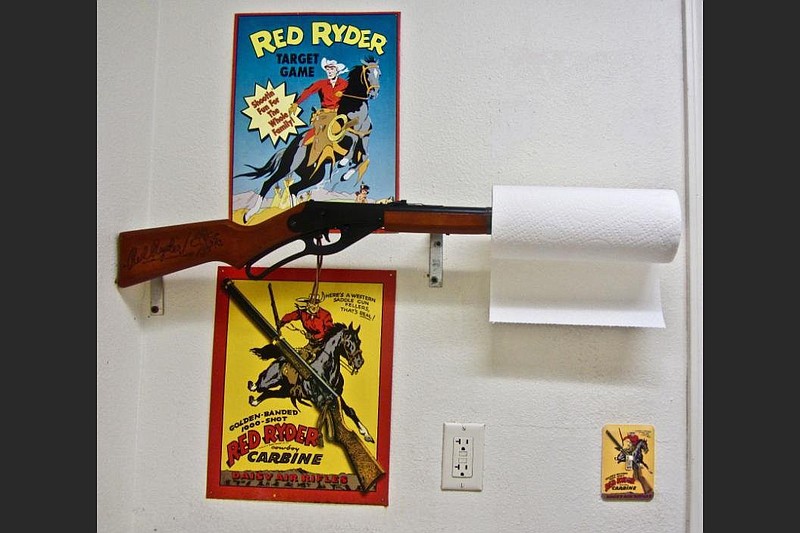 ROGERS — New this year at the Daisy Airgun Museum in downtown Rogers is a towering sight that would have wowed 9-year-old Ralphie and his family in the holiday movie classic "A Christmas Story."

Standing 25 feet tall outside the museum's entrance is a gargantuan mock rifle billed as "The World's Largest Daisy BB Gun." It rises nearly as high as the roof of the two-story building, whose ground floor is filled with exhibits tracing the history of Daisy Manufacturing Co. since the 1880s.

One of the most popular of the museum's 29 exhibit areas focuses on "A Christmas Story," which several surveys have ranked as the best holiday movie ever. The display includes an antique tabletop radio, circa 1940, rigged with a small video screen that shows snippets from the film.

In one of the replayed scenes, Ralphie Parker gets his mouth washed out with soap by his mom for having used a dirty word. In another, he is frightened by a gruff department store Santa and his elf. In another, he breaks his glasses on Christmas morning after the recoil from his new Red Ryder air rifle knocks them off.

Other items evoking "A Christmas Story" include a replica of the garish leg lamp treasured by Ralphie's father and its crate labeled "Fragile" (pronounced "Fra-jee-lay" by "The Old Man"). A Red Ryder poster is headlined "I'll Help You Get a Daisy for Christmas." Black-and-white photos from the set picture principal actors Peter Billingsley, Darren McGavin, native Arkansan Melinda Dillon and Ian Petrella.

"There's a little bit of Ralphie in each of us," says Joe Murfin, the nonprofit museum's chairman of the board. The film display "always brings a smile to people's faces, because a large majority of them have seen the movie."

Visitors among the many million Americans who owned a Daisy rifle as a youngster may find the museum as fascinating as the Baseball Hall of Fame would be to a lifelong big-league fan. Those clueless about airguns will learn that they operate on compressed air to fire a BB or other metal pellet at relatively low velocity.

The Red Ryder BB gun gets a lot of museum attention. Unless you are a senior citizen, Red Ryder may be unknown to you. He was a popular movie-serial cowboy in the 1930s and rode the comic-book range as a character until 1964

As museum-goers learn, the Red Ryder is the best-known BB gun ever made. Manufactured from March 1940 until Daisy switched to World War II military gear in mid-1942, it resumed production in late 1945 and sold more than a million rifles in 1949 alone.

Visitors learn that the current Daisy Outdoor Products company began in 1882 as the Plymouth Iron Windmill Co. in that Michigan town. With the business failing in 1888, the owners made an all-metal airgun and offered it as a premium to any farmer who would buy a windmill.

As the story goes, an inventor had approached Daisy executives with that airgun, which board members passed around. Supposedly one of them exclaimed, "Boy, that's a daisy!" Thus the gun was named and the rest is history.

Red Ryder is one theme on model trucks at Daisy Airgun Museum. (Special to the Democrat-Gazette/Marcia Schnedler)  Daisy moved its operations to Rogers in 1958 and opened a small museum there in 1966. When the company outsourced its manufacture of parts in 1997, mainly to China, assembly of the rifles was moved to Neosho, Mo. A larger museum was opened in downtown Rogers in 2000, with Arkansas' first lady at the time, Janet Huckabee, shooting through a ribbon to mark the dedication.

In 2007, Daisy brought its assembly operations back to Rogers, three years after the museum was moved to its present location. The company's rifles and other products are put together in America from Chinese-built parts. That seems ironic, given that private possession of firearms is generally forbidden in China.

One display area is devoted to Daisy's role in gun education. The 48-page guide booklet to the site asserts that "more young people have learned how to shoot safely with a Daisy BB gun than any other brand."

If Ralphie had taken a Daisy safety course before firing his first shot in the family's backyard, it's likely he'd have handled the recoil that resulted in his broken eyeglasses. But that would have left "A Christmas Story" without one of its final twists.