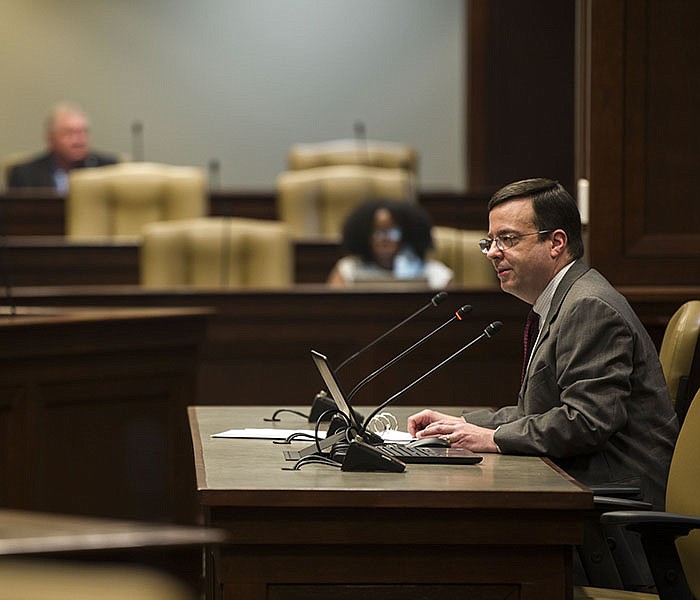 FILE - Mark White, chief of staff at Arkansas Department of Human Services, addresses the House and Senate Public Health Committee during a meeting to discuss the end of the federal public health emergency and its impact on Medicaid, Arkansas Works and ARHOME on Tuesday, July 6, 2021. (Arkansas Democrat-Gazette/Stephen Swofford)

About 50,000 Medicaid eligibility applications were backlogged as of mid-November, according to state Department of Human Services spokeswoman Amy Webb. Webb said that number is not unprecedented, but the main causes of the backlog are the coronavirus pandemic, which has resulted in worker quarantines and temporary office closures because of positive cases, and staff turnover that has led to vacancies the department is having difficulty filling.

"We are short-staffed as most public [and] private employers are right now, and we've got a backlog of applications to process," Mark White, chief of staff for the Department of Human Services, told the Review Subcommittee of the Arkansas Legislative Council.

White said the backlog is primarily affecting long-term care facilities, which means nursing homes and assisted living facilities have to operate without payment.

"The issues that most affect the beneficiaries have been our long-term care, where we have seen applications taking a little longer to process," he said after the meeting. "We know that's a strain on nursing homes, so we're working to address that."

The company will bring in staff to help the department work through the backlog as well as "provide some ongoing surge capacity" by allowing the state to access the company's capacity to augment its own staff to deal with an influx of patients, he added.

Maximus will recruit, hire and train contracted eligibility specialists, according to information about the contract provided to the committee. The Department of Human Services inked a larger contract with Maximus for staffing several years ago, Webb said.

When the contract goes before the Arkansas Legislative Council for approval on Friday, the department will present its full plan, at the request of Rep. Jeff Wardlaw, R-Hermitage, White said.

Wardlaw, along with fellow Legislative Council co-chairman Sen. Terry Rice, R-Waldron, said in interviews Tuesday they are concerned about the impact of the delayed payments on rural nursing homes.

Wardlaw said his area lost two assisted living facilities two years ago as a result of Medicaid reimbursement issues and that other legislators from rural areas share those concerns.

"Every time we lose one of these facilities, we can't get them back," he said.

Rice said the backlog issue has been going on for some time and, at one point, reimbursements were taking four to five months when they should take 45 days or less. It's something he has been discussing with the Department of Human Services officials for a number of months, he said.

He added that nursing homes have already been struggling financially as a result of the pandemic and that some have taken out personal loans to stay afloat.

"There's been some strain on that industry anyway," he said. "DHS needs to get these people placed and get those back payments."

Rice said the pandemic and staffing shortages are legitimate excuses, but said he expects the government to hold itself accountable like a private business would.

"When you're talking about some of these homes going out of business, they will not be back, and I keep preaching that to them," he said.

Webb said in an email that the contract, in addition to addressing the backlog, allows the department to "staff up and provide support" as it prepares to deal with the end of the public health emergency.

The federal government's public health emergency declaration is set to expire at the end of March, but it could be extended.

Under that declaration, there are limited circumstances by which the Department of Human Services can remove someone from the Medicaid programs, such as death, Webb said, so there will be lot of casework and eligibility re-determinations once the public health emergency ends.

"Obviously, we don't have to do it overnight or all at once. We would have six months to redetermine eligibility once it ends," she said.

The Department of Human Services also recently launched a new eligibility system, which it piloted in a few counties in December 2020 and launched statewide in April 2021. Webb said the system is working well, and the department launched a pilot to include Supplemental Nutrition Assistance Program, or food stamps, cases in some counties in the new system.