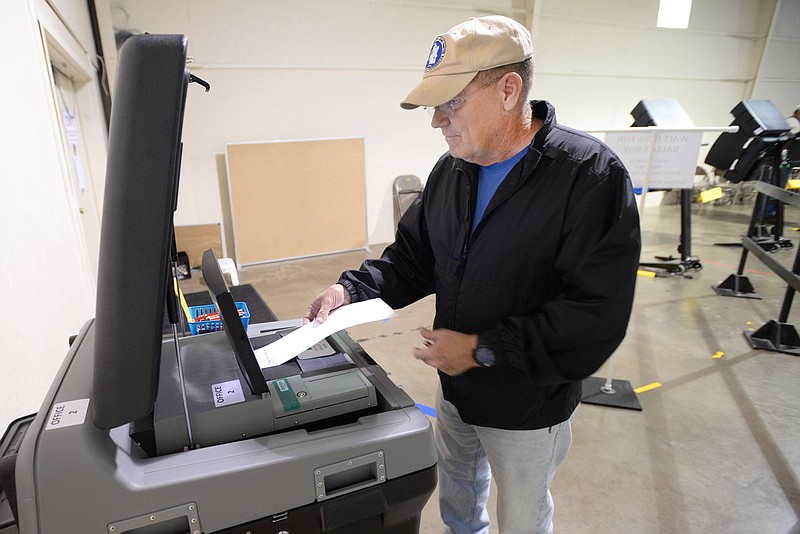 Mike Brinson of Elkins places his ballot into the ballot box Tuesday, Dec. 14, 2021, after voting in the Republican and Democratic primaries to pick candidates for special election for Senate District 7 at the First Baptist Church of Elkins. Visit nwaonline.com/211215Daily/ for today's photo gallery. (NWA Democrat-Gazette/Andy Shupe)

Democrat Lisa Parks will face that runoff's winner in the special election Feb. 8.

Gov. Asa Hutchinson called the special election to replace Sen. Lance Eads, R-Springdale, who resigned Oct. 28 to take a lobbying job. Someone who voted in the Democratic primary is not eligible to vote in the Republican runoff.

Runoff elections take place when no candidate in a primary gains a majority of the vote.

Fulfer came within 100 votes of the 1,487 needed to win the primary outright, with no runoff.

Parks is an attorney from Tontitown who specializes in children's welfare. Van Voast is founder of a Springdale-based nonprofit.

Complete, but unofficial results were:

District 7 includes most of Springdale and Johnson, plus southern Tontitown, all of Goshen and Elkins, and eastern bits of Fayetteville. The district stretches to the eastern border of Washington County and touches both the southern and northern county lines.

The state has 35 Senate districts. State senators serve four-year terms and each receives a base salary of $42,428. They also receive per diem and reimbursement for expenses.