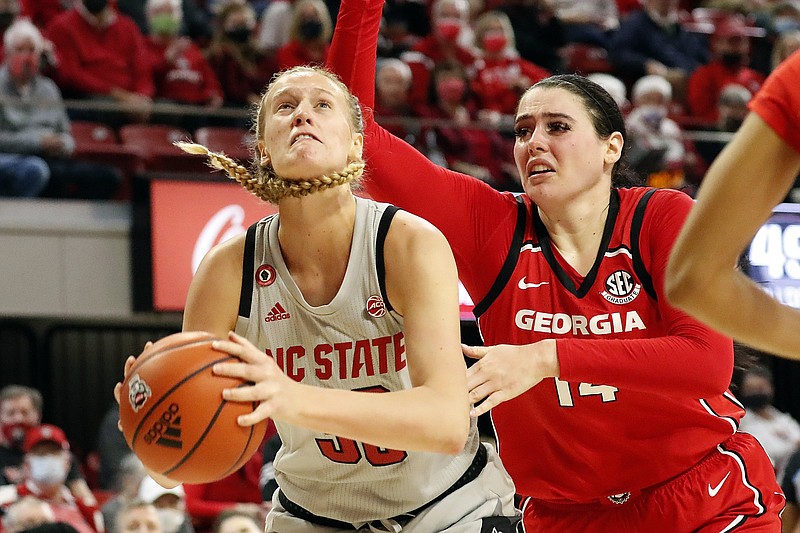 North Carolina State’s Elissa Cunane (left) looks towards the basket as Georgia’s Jenna Staiti defends during the second half Thursday in Raleigh, N.C. Staiti, who had 21 points and 11 rebounds, had a key defensive stop in overtime to help the No. 17 Bulldogs upset the second-ranked Wolfpack 82-80. (AP/Karl B. DeBlaker)

RALEIGH, N.C. -- Coach Joni Taylor watched her 17th-ranked Georgia team respond without panic or jitters when its big lead vanished in front of a hostile crowd.

In fact, the Bulldogs couldn't have been much tougher in critical moments Thursday night, from hitting a game-extending huge shot to coming up with a winning defensive stand to beat No. 2 North Carolina State 82-80 in overtime.

"It felt like March, right?" Taylor said. "That felt like March Madness out there. So what we've been telling our team is this is the schedule that we're prepared to play. This is what we're ready for.

"What I hope we have learned from it is that we have a chance to be really good."

The Bulldogs (9-1) sure looked that way Thursday night, too.

There was Sarah Ashlee Barker (16 points) hitting a long, leaning three-pointer over Kai Crutchfield with 0.4 seconds left in regulation on an inbounds play that didn't go according to plan but worked all the same.

There was the 6-4 Jenna Staiti going for 21 points, 11 rebounds and 6 blocks in a post matchup with Elissa Cunane -- and then coming up with the critical defensive stop against the preseason Atlantic Coast Conference player of the year in the final seconds of OT.

It was the first road win for Georgia against a team ranked either No. 1 or No. 2. And it ended with the Bulldogs bench running from the bench to near midcourt for a hug-filled celebration on the Wolfpack's home court.

That celebration continued into the locker room, judging by Taylor's soaked hair on her postgame Zoom news conference.

"Hopefully it proves to them -- if there was any doubt -- that we have an opportunity to be really special," Taylor said.

Cunane had 18 of her 20 points in the second half for the Wolfpack after spending most of the first half on the bench with two quick fouls. Diamond Johnson added 17 points for the Wolfpack, who rallied from down 40-28 at halftime but couldn't hold onto a four-point lead in the final minute of regulation.

The loss snapped a 10-game winning streak for the Wolfpack (10-2), who dominated the third quarter and outscored Georgia 24-11 only to surrender 24 points in the fourth.

"We've got to figure out a way to guard better and defend better than what we're doing, and rebound better," N.C. State Coach Wes Moore said, adding: "Obviously we're capable of scoring the ball, we've just got to make sure we stop somebody else."

LOUISVILLE, Ky. -- Kianna Smith made five three-pointers for a career-high 22 points, Hailey Van Lith added 13 points and No. 6 Louisville shot 51% to cruise past Eastern Kentucky for its ninth consecutive victory.

The Cardinals (9-1) showed no letdown from Sunday's tense win over No. 19 Kentucky, running off 11 unanswered points for a 13-3 lead midway through the first quarter that steadily grew behind hot shooting. Their bench helped spark 11-of-16 shooting in the second for a 51-28 halftime cushion and the lead reached 73-33 early in the fourth.

Emma Hacker scored 10 points for the Colonels (4-6), who were coming off a 66-43 rout of Morehead State on Wednesday night. EKU made 1 of 7 shots in the third quarter for five points and finished shooting 26% overall.

DURHAM, N.C. -- Wendell Moore Jr. scored 21 points as No. 2 Duke pulled away for a victory over Appalachian State.

Moore made 8 of 11 shots and had 5 rebounds and 6 assists. Paolo Banchero scored 16 points, AJ Griffin and Trevor Keels had 11 apiece and Jeremy Roach scored 10 for the Blue Devils (9-1).

The Mountaineers trimmed the deficit to five points early in the second half, but Duke then connected on three consecutive three-point attempts.

Leading the Mountaineers was Michael Almonacy, who scored all of his 17 points in the first half. Justin Forrest had 16 points for App State.

The University of Central Arkansas women ended a three-game skid with a trouncing of cross-town foe Central Baptist College.

UCA's (4-5) 38-point win margin was its second-largest of the season, after beating Hendrix by 39 points in its second game.

Lucy Ibeh led all scorers with 16 points off the bench for UCA. Ibeh posted her fourth double-double this season, recording 12 rebounds, as well as 4 steals and 2 assists. Lashiyah Fowler was the Sugar Bears' only other scorer in double figures,with 11 points. As a team, UCA had 20 steals.

Macey Decker led Central Baptist (7-3) with 12 points, and Aminata Seck added 8. The Mustangs only had six total players, as Cree McLemore was their lone player off the bench. 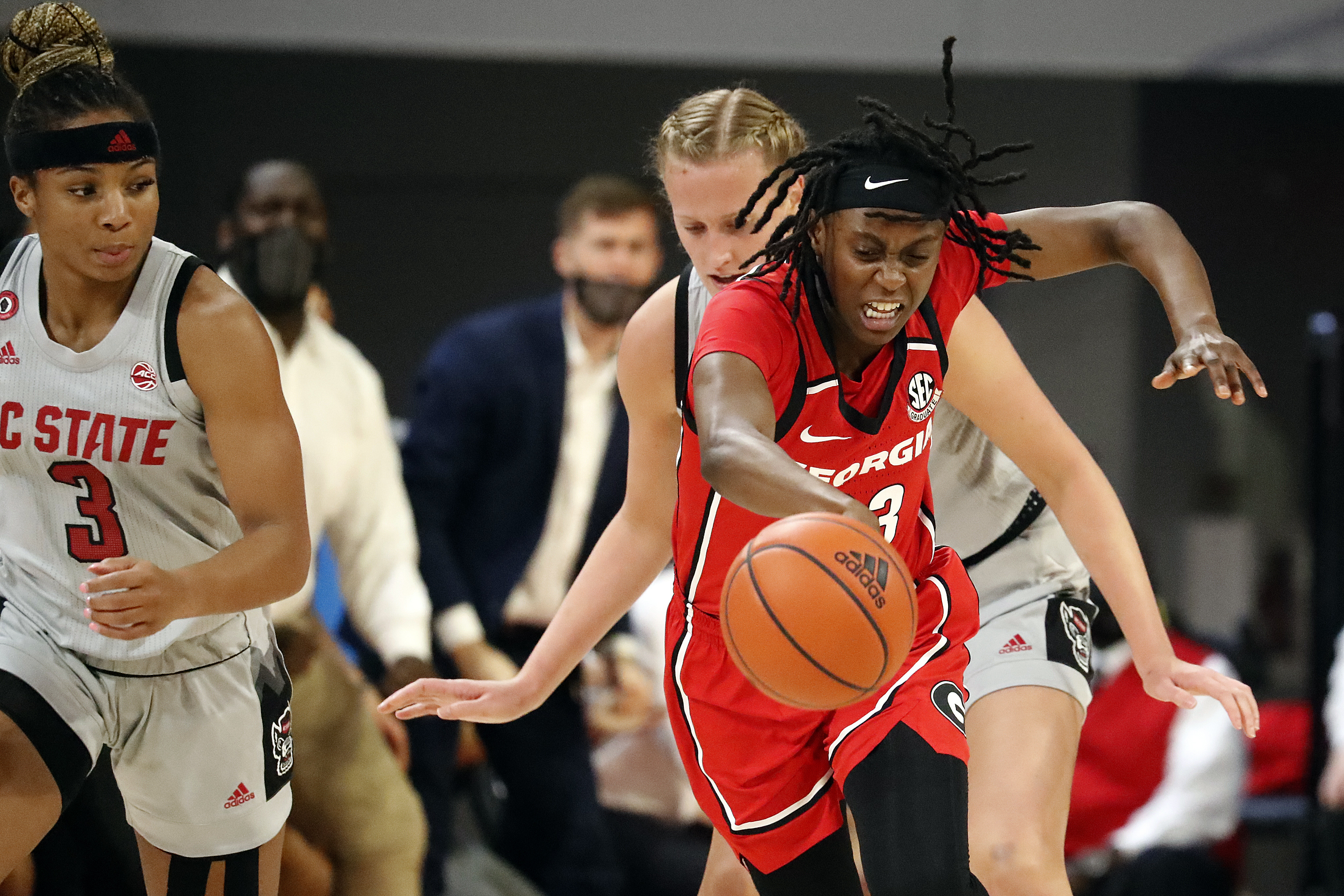 Georgia's Que Morrison, front right, tries to steal the ball from North Carolina State's Elissa Cunane, back right, with North Carolina State's Kai Crutchfield, left, watching during the first half of an NCAA college basketball game, Thursday, Dec. 16, 2021, in Raleigh, N.C. Morrison was called for a foul on the play. (AP Photo/Karl B. DeBlaker) 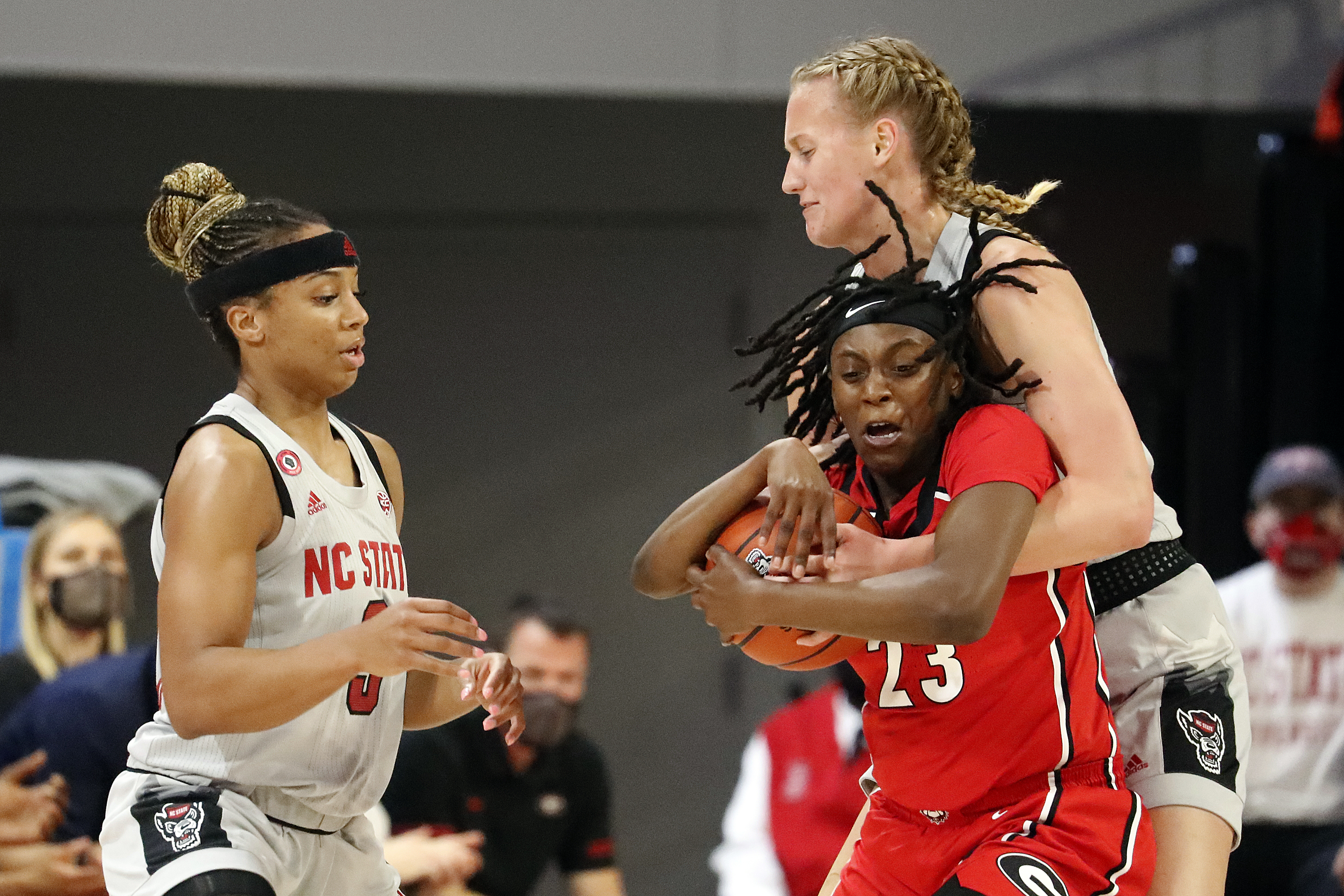 Georgia's Que Morrison (23) tries to steal the ball from North Carolina State's Elissa Cunane, top right, with North Carolina State's Kai Crutchfield (3) watching during the first half of an NCAA college basketball game, Thursday, Dec. 16, 2021, in Raleigh, N.C. Morrison was called for a foul on the play. (AP Photo/Karl B. DeBlaker) 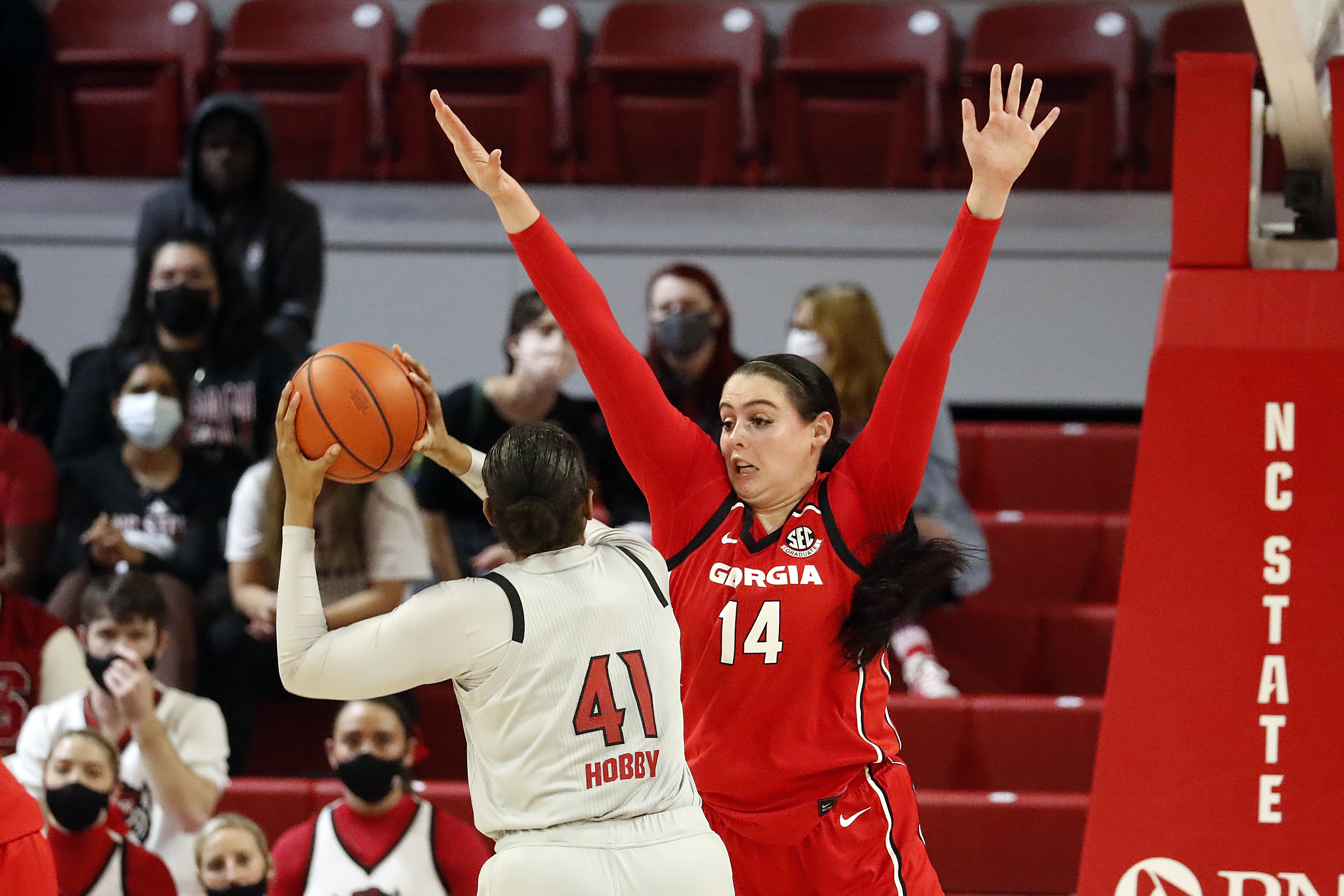 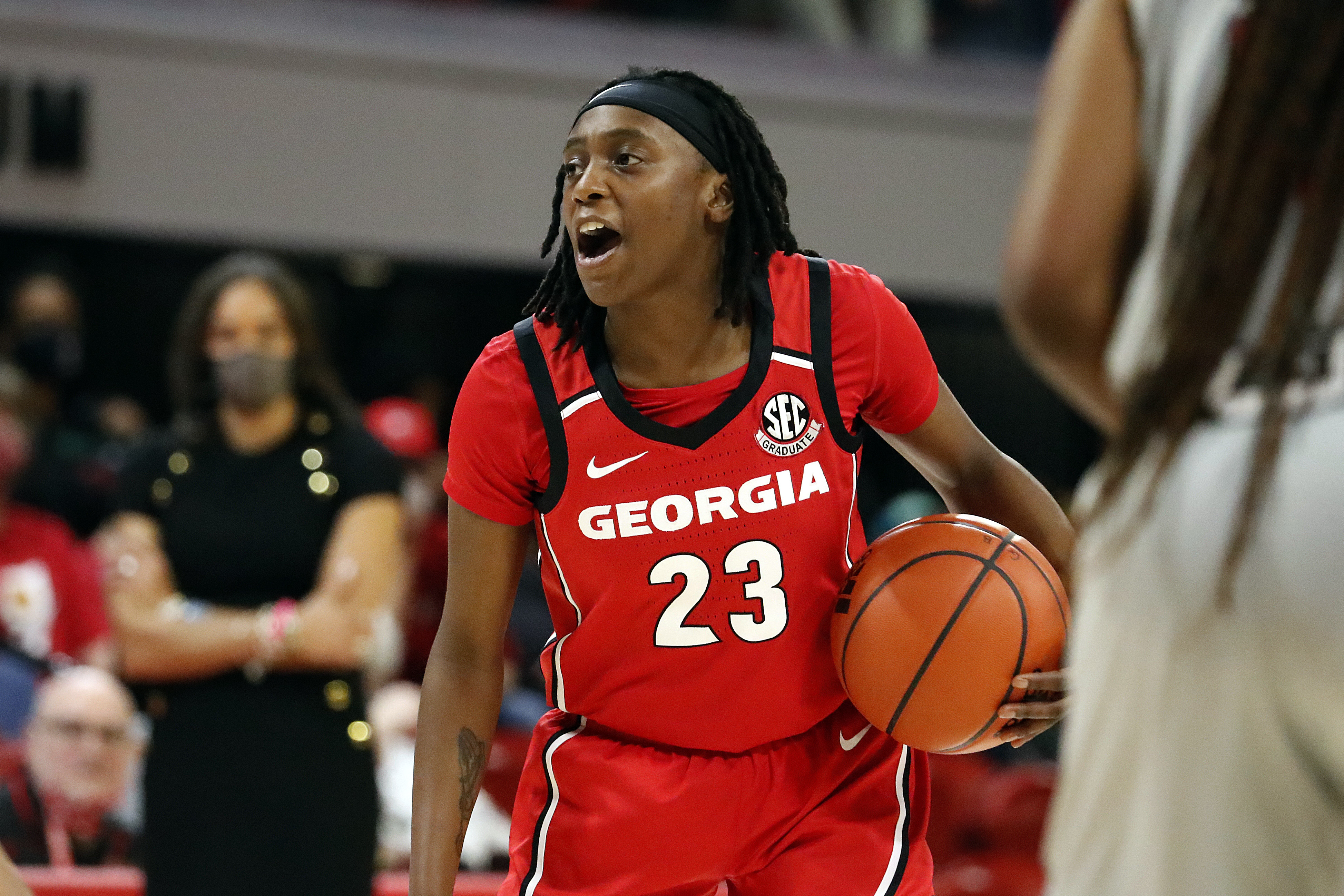 Georgia's Que Morrison (23) controls the ball against North Carolina State during the first half of an NCAA college basketball game, Thursday, Dec. 16, 2021, in Raleigh, N.C. (AP Photo/Karl B. DeBlaker) 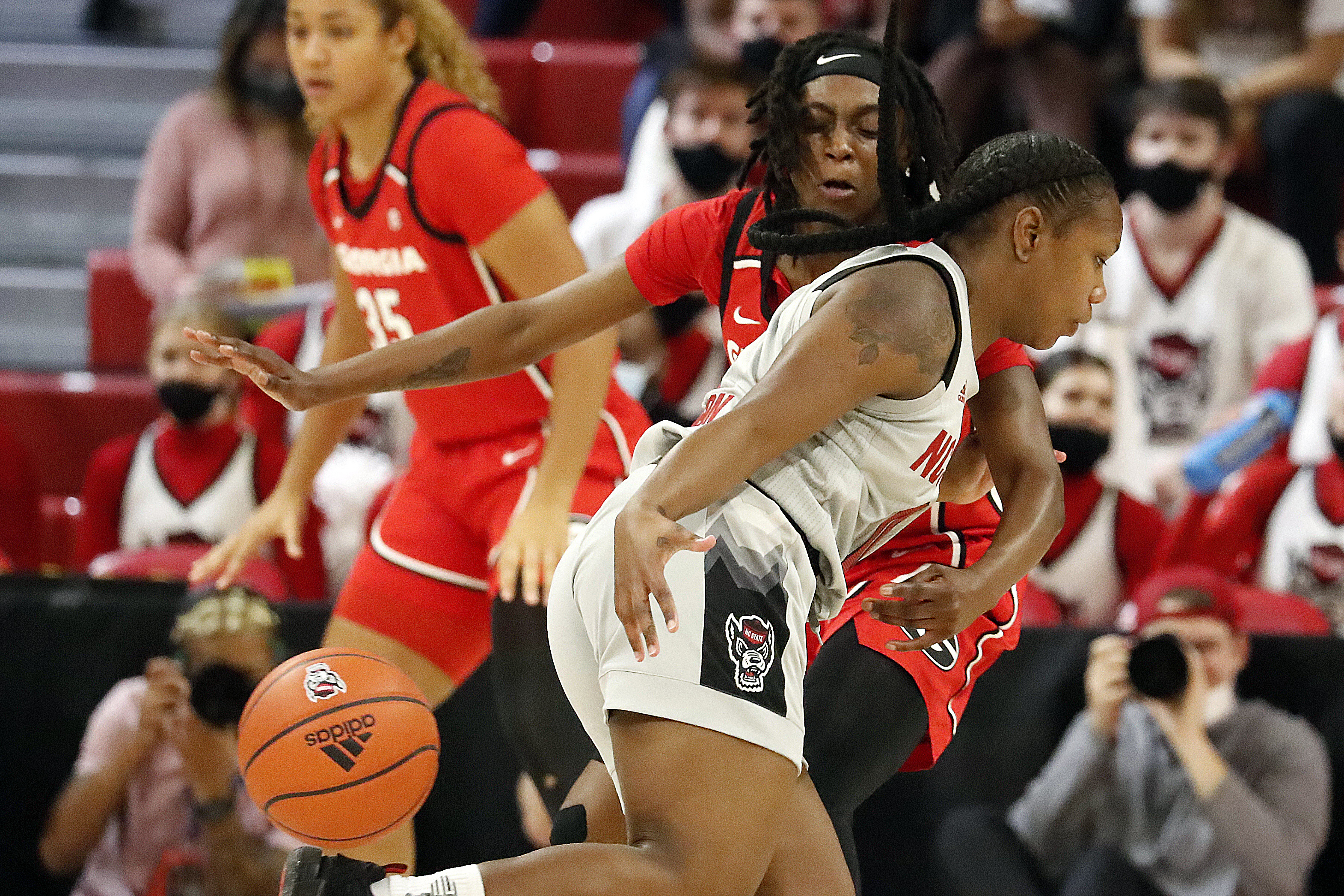