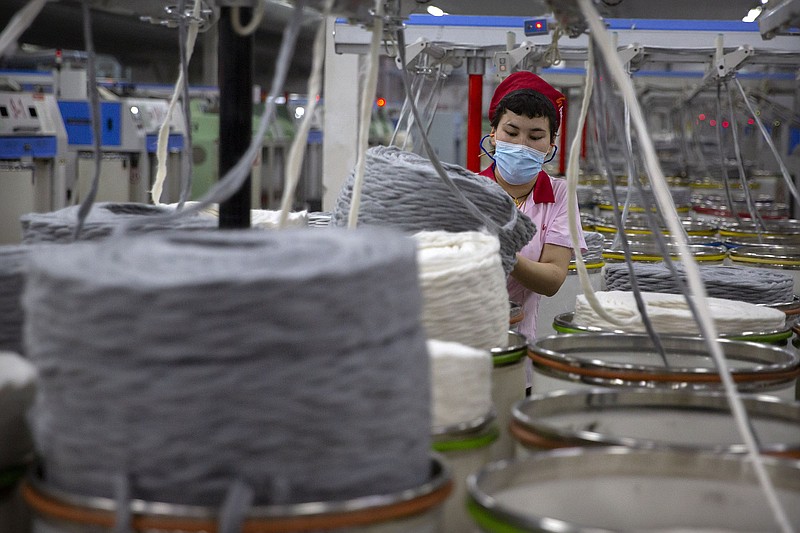 A worker gathers cotton yarn at a textile plant in China’s Xinjiang region last spring. China on Friday urged the U.S. “to immediately correct its mistake” after the Senate passed a bill barring imports from the region unless businesses can prove the items were produced without forced labor. (AP/Mark Schiefelbein)

BEIJING -- China will take all necessary measures to safeguard its institutions and enterprises, a Foreign Ministry spokesman said Friday after the U.S. Senate passed a law barring imports from the Xinjiang region unless businesses can prove they were made without forced labor.

The spokesman, Wang Wenbin, said the measure approved Thursday "indicates that the U.S. has no scruples about smearing China by every means."

"The relevant actions seriously undermine the principles of market economy and international economic and trade rules, and seriously damage the interests of Chinese institutions and enterprises," Wang told reporters at a daily briefing.

"China strongly deplores and rejects that and urges the U.S. to immediately correct its mistake. China will take all necessary measures to resolutely safeguard the legitimate rights and interests of Chinese institutions and enterprises," Wang said without elaborating.

The law is the latest U.S. penalty over China's alleged systemic and widespread abuse of ethnic and religious minorities in its far western region, especially Xinjiang's predominantly Muslim Uyghurs.

President Joe Biden is expected to sign the law after overcoming initial hesitation from the White House and what supporters said was opposition from corporations. He also announced new sanctions Thursday that target several Chinese biotech and surveillance companies, a leading drone manufacturer and government entities for their actions in Xinjiang.

Despite numerous independent investigations finding forced sterilization and large detention camps where many Uyghurs allegedly are compelled to work in factories, China has denounced all such claims as the "lie of the century."

It portrays them as part of an effort to stifle China's growth and damage its reputation. China at first denied the prison-like camps exist but later said they were voluntary centers for job training and de-radicalization. It now says all "students" have graduated.

"The U.S. government is trying to strangle the economy of Xinjiang through its industrial and supply chains under the false pretexts of 'forced labor' and 'violations of human rights,'" the official Xinhua News Agency said Friday, citing a report by the Institute for Central Asia Studies under Lanzhou University in northwestern Gansu province.

The U.S. says raw cotton, gloves, tomato products, silicon, fishing gear and a range of solar energy components are among goods allegedly made with help from forced labor.

Factory work has long been associated with the camps, through which somewhere between 900,000 and 1.5 million Uyghurs and other Chinese Muslims have passed, said Darren Byler, an assistant professor of international studies at Canada's Simon Fraser University who has studied and written extensively about the camps.

Workers considered troublesome may be given prison terms, sometimes in camps converted into penitentiaries, Byler said. After they leave, they are kept in line through constant surveillance and the threat of being sent back to the camps, he said.

Muslims sent to work in other parts of China are given no choice, are separated from their families and are accompanied by a Xinjiang Communist Party official and police officer, Byler said. Their activities are highly circumscribed, and they are not allowed to practice Islam.

The move bars American companies from selling goods and technologies to the entities without a license.

Separately, the Treasury Department announced that it was placing DJI, the world's largest drone manufacturer, and seven other Chinese companies on an investment blacklist over their alleged involvement in biometric surveillance and tracking of Uyghurs.

The measure means Americans will be prohibited from buying or selling publicly traded securities connected with the companies.

DJI dominates the global market for small, low-altitude drones used by hobbyists, photographers, and many businesses and governments.

The White House announced last week that it would stage a diplomatic boycott of the forthcoming Winter Olympics in Beijing, citing China's "egregious human rights abuses and atrocities in Xinjiang." U.S. athletes will compete but Biden will not send the usual contingent of dignitaries.

China vowed "resolute countermeasures" over the boycott, but has given no indication of how it plans to respond.

Rights groups note that prison labor has long been a part of the U.S. economy, with inmates producing goods and providing services such as call centers for what is typically reduced pay. Opponents say the system disproportionately profits off the labor of incarcerated Black Americans.