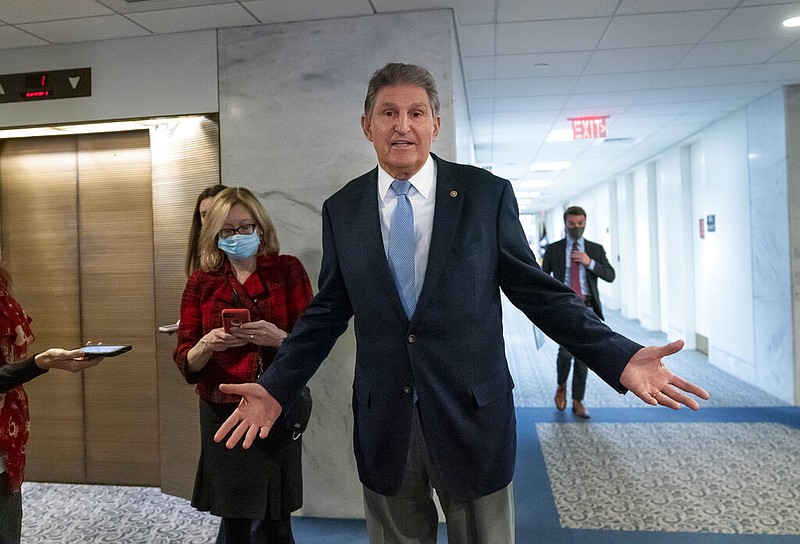 U.S. Sen. Joe Manchin, D-W.Va., leaves his office after speaking with President Joe Biden about the president's domestic agenda at the Capitol in Washington in this Dec. 13, 2021, file photo. Manchin has been reluctant to endorse the Biden administration’s expanded child tax credit program. (AP/J. Scott Applewhite)

WASHINGTON -- Arkansas families received their latest payments this week under the child tax credit program, a Democratic-backed effort to expand federal aid and give parents up to $300 per child on a monthly basis.

But that monthly payment is the last for parents in Arkansas and elsewhere across the nation unless further action is taken.

President Joe Biden's wide-ranging social and environmental legislation includes an extension of the child tax credit, but the legislation is running into solidified opposition from Senate Republicans. Democrats have yet to garner enough support to push the package through the chamber.

Bruno Showers, senior policy analyst at the Arkansas Advocates for Children and Families, said the direct payments help parents pay for things like food, utilities, rent and education expenses as the nation continues to be gripped by the coronavirus pandemic.

"It's really helping people make ends meet basically, especially people who have suffered from this [covid-19] public health crisis and the economic fallout that comes with it," he said.

The child advocacy organization is pushing for Biden's policy bill, which is commonly referred to as the Build Back Better Act. The legislation passed the House last month.

Children in Arkansas are being lifted above the poverty line because of the child tax credit payments, Showers said, and that money is being spent in the local economy.

"For a lot of families, it'll feel like getting a rug pulled out from under them when the payments stop," he said. "I think some people might not be expecting it. They're not tuned in necessarily."

The Center on Poverty and Social Policy at Columbia University recently credited the expanded child tax credit with keeping 3.8 million kids out of poverty in November.

This month, families in Arkansas received more than $160 million in payments under the program, with an average payment of $458, according to figures from the Treasury Department. The department reported that payments were made to 350,000 families with 602,000 children.

From July to December, Arkansas parents received more than $925 million in payments under the program, the department reported.

The child tax credit was expanded earlier this year through the American Rescue Plan, which raised the age limit from 16 to 17 and increased the credit amount, according to the White House.

The monthly payments went through the end of the year. But if Congress does not pass Biden's social and climate legislation, there will not be monthly payments going forward with the child tax credit, according to a Treasury Department spokesperson. Instead, the credit would revert to $2,000 for every child and no monthly payments would be provided, the official said.

"If Congress passes the Build Back Better Act, Treasury is committed to making sure families receive their first Child Tax Credit payments as soon as possible," the Treasury spokesperson said in a statement.

Biden's social and climate package passed the House weeks ago with Arkansas' all-Republican House delegation voting against the measure. Republicans have fiercely criticized the Build Back Better Act, which includes a wide array of other policy items besides the child tax credit.

Republicans have pointed to soaring consumer prices in arguing against the bill.

The Labor Department reported that the consumer price index surged 6.8% for the year ending in November, marking the largest 12-month upturn in about four decades. The index measures the change in prices for consumer goods and services.

Rep. French Hill, R-Ark., voted against Biden's social and climate bill in the House and issued a statement saying it was Republicans who expanded the child tax credit to "reward work and provide tax relief" during the Trump presidency.

"Instead of the go-at-it-alone approach, Democrats should work with Republicans to extend the 2017 expansion of the program," he said in a statement. He argued there's opposition to making the monthly credit payments permanent.

Rep. Bruce Westerman, R-Ark., issued a statement saying Democrats in Congress could have passed the child tax credit separate from Biden's social and environmental bill. But putting the child tax credit with the Build Back Better Act "has doomed it to fail," he argued.

"I support a reasonable child tax credit, but what is in the BBB expands the role of the federal government in a way I could never support," he said in the statement.

Alexia Sikora, a spokeswoman for Rep. Steve Womack, R-Ark., said in a statement that Biden's legislative package would ensure inflation and a "radical expansion of government."