Susan Smith Epperson challenged a state law prohibiting teaching evolution in state schools in 1968. Where is she now? by Frank E. Lockwood | December 18, 2021 at 3:19 a.m. 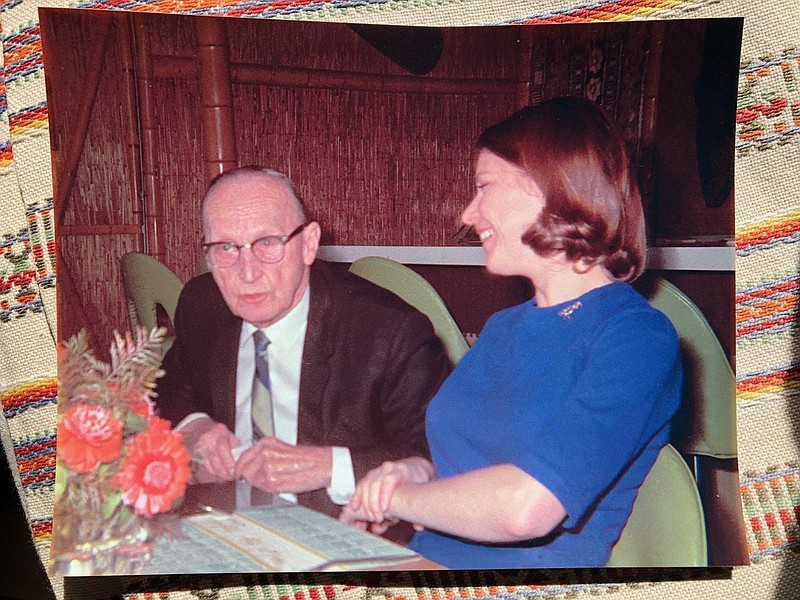 Susan Smith Epperson, who successfully challenged Arkansas’ anti-evolution law in the 1960s, visits with John Scopes, who was convicted in 1925 of violating Tennessee’s anti-evolution law. A Presbyterian minister, Jerry Tompkins, arranged for the two educators to meet for lunch in Shreveport in January 1969, two months after the Supreme Court struck down Arkansas’ ban on the teaching of evolution. Scopes, whose conviction was overturned, died the following year at age 70. (Photo courtesy of Susan Smith Epperson)

In 1928, an Arkansas Baptist minister named Ben Bogard helped to pass a ballot measure prohibiting the teaching of evolution in the state's schools, presenting it as a bulwark against atheism.

In a 9-0 ruling, the nation's highest court struck down Arkansas' anti-evolution law, one of only two remaining on the books nationwide.

At the time that the suit was filed, critics suggested Epperson, a 10th grade biology teacher at Little Rock's Central High School, was doing the devil's work.

"I got letters telling me that I was going to hell," Epperson, 80, recalled in a recent interview.

Rather than rebutting her critics, her instinct, she said, was to pray for them.

"I kind of knew who makes the decision about who goes to hell. And it was not the person who wrote that letter," she said.

Bogard, who helped spearhead the ballot measure, died in 1951; the anti-evolution law outlived him by 17 years.

He believed evolution and the Gospel were at loggerheads, according to his biographer, J. Kristian Pratt.

"You could either believe in Darwin's view or you could believe in the biblical view," said Pratt, author of "The Father of Modern Landmarkism: The Life of Ben M. Bogard" and a professor of religion at Spartanburg Methodist College in South Carolina. Attempts to reconcile Christianity and Darwinian science were misguided, Bogard believed.

While fundamentalists were trying to stamp out Darwinism, Epperson embraced the theory of evolution.

A native of Johnson County, Epperson had spent her Sundays at First Presbyterian Church in Clarksville, worshipping alongside her father and mother.

Her father, T.L. Smith, was employed for decades by the College of the Ozarks (now University of the Ozarks), which is affiliated with the Presbyterian Church.

"My parents were solid Christian believers. My dad was a biology teacher and an elder in the church," she said. "I grew up basically in a home where there was no conflict between science and faith."

Epperson was a 24-year-old newlywed, barely out of college, when she challenged the law, which made it a crime "to teach the theory or doctrine that mankind ascended or descended from a lower order of animals," or "to adopt or use in any such institution a textbook that teaches" that theory.

The prohibition applied to teachers at any state-funded school or university.

The Arkansas Education Association had been seeking to challenge the statute. Epperson, a member of Little Rock's Second Presbyterian Church, agreed to be the plaintiff.

Her suit, filed in December 1965, generated national headlines. The litigation would not be resolved until November 1968.

Epperson wasn't the first teacher to challenge a state anti-evolution statute. Nor was she the most famous -- the Scopes monkey trial in 1925 had already immortalized the name of John Scopes, the Dayton, Tenn., teacher convicted of teaching evolution, in violation of that state's laws.

In the interim, anti-evolution laws had nearly vanished. By the time Epperson's appeal reached the U.S. Supreme Court, only two states -- Arkansas and Mississippi -- still had the so-called "monkey" laws on their books.

Writing for the court, Justice Abe Fortas argued the statute essentially sought to bolster a particular religious point of view, in violation of the First and Fourteenth Amendments.

"In the present case, there can be no doubt that Arkansas has sought to prevent its teachers from discussing the theory of evolution because it is contrary to the belief of some that the Book of Genesis must be the exclusive source of doctrine as to the origin of man," he wrote. "No suggestion has been made that Arkansas' law may be justified by considerations of state policy other than the religious views of some of its citizens. It is clear that fundamentalist sectarian conviction was and is the law's reason for existence."

By the time the case reached the U.S. Supreme Court, Epperson was a stay-at-home mom, living in the Washington area, while her husband, Jon Epperson, served in the U.S. Air Force.

They sat quietly in the courtroom on Capitol Hill as the lawyers made their oral arguments before the nine justices.

"We were just anonymous tourists, essentially. I don't recall that it was especially crowded," she said.

Two months after the ruling, she got the opportunity to visit with another former high school biology teacher -- she and John Scopes met in January 1969, a meeting arranged by a Presbyterian minister named Jerry Tompkins.

In addition to pastoring at First Presbyterian Church in Monticello, Tompkins had also written a book on Tennessee's 1925 evolutionary battle titled "D-Days at Dayton: Reflections on the Scopes Trial."

Due to her husband's Air Force duties, the family moved around the country before settling, finally, in Colorado Springs, Colo., home of the U.S. Air Force Academy.

Jon Epperson, the son of an Oklahoma Presbyterian minister, taught math for years at the academy before retiring.

Susan Smith Epperson would go on to teach science courses at Pike's Peak Community College and then the University of Colorado at Colorado Springs.

More than a half-century after the landmark Epperson v. Arkansas case, Epperson and her husband remain faithful Presbyterians.

"We are members of First Presbyterian Church in downtown Colorado Springs. We have been for a long time," she said.

Her son, Mark, was a college minister for about 15 years; he's currently acting and singing in New York. Her daughter, Elaine, has a PhD in molecular biology.

"She, too, is a strong Christian," Epperson said.

Covid has made in-person worship a challenge, she said.

"Fortunately, the church is available online, which is really lovely. I mean, all through this pandemic, we've been able to just sit here at our kitchen counter with the laptop and go to church," she said.

Due to her role in a landmark Supreme Court case, she receives speaking engagements periodically. She delivered a commencement address at University of the Ozarks in 2016, and she has even spoken in Dayton, site of the original monkey trial.

"Whenever I speak, I talk about my faith," she said. "You're talking to a bunch of science teachers or science people. Some of them may be believers, some are not, but the door is open for me because of the [Supreme Court] case. And so I can just stand there and talk about my faith and say that I see no conflict."

"If I have a mission in life, it is to try -- and you're really hitting your head on a brick wall, I think -- to ... convince people that evolution is not anti-biblical, it's not anti-faith [or] anti-religion," she said.

There are plenty of people in the scientific community who view science and faith as complementary, she said.

"Francis Collins, the scientist who has just retired [as] head of the National Institutes of Health in Washington, D.C. He is a strong Christian, and he is a strong scientist," she said.

"I'm very concerned about it. I think we could lose our planet, unfortunately," she said.

"In Genesis, God tells us to be caretakers of the land. That doesn't mean to abuse the land and the resources and I think we have," she said.

Asked how she views the Bible, Epperson referred to a passage from II Timothy 3:16: "All scripture is inspired by God and is useful for teaching, for reproof, for correction, and for training in righteousness."

"I try to read from the Bible most every day and have time with the Lord," she said.

While she looks to the scriptures for guidance, "I certainly don't look at Genesis as a science book," she said.

When it comes to covid-19, the Eppersons trust the science.

"[We're] totally vaccinated, with the booster shot," she said.

Randy Moore, a biology professor at the University of Minnesota, is a longtime friend of Susan Smith Epperson's.

Scientists, educators and students are indebted to Epperson for the stand she took in Arkansas, he said.

"In terms of teaching biology, evolution is the basic foundation idea. Thanks to her, it became, in some cases, legal to teach it," he said.

"In terms of biology education, I think she's royalty," he said. "For my profession, very few people have done as much as she did and that took some guts." 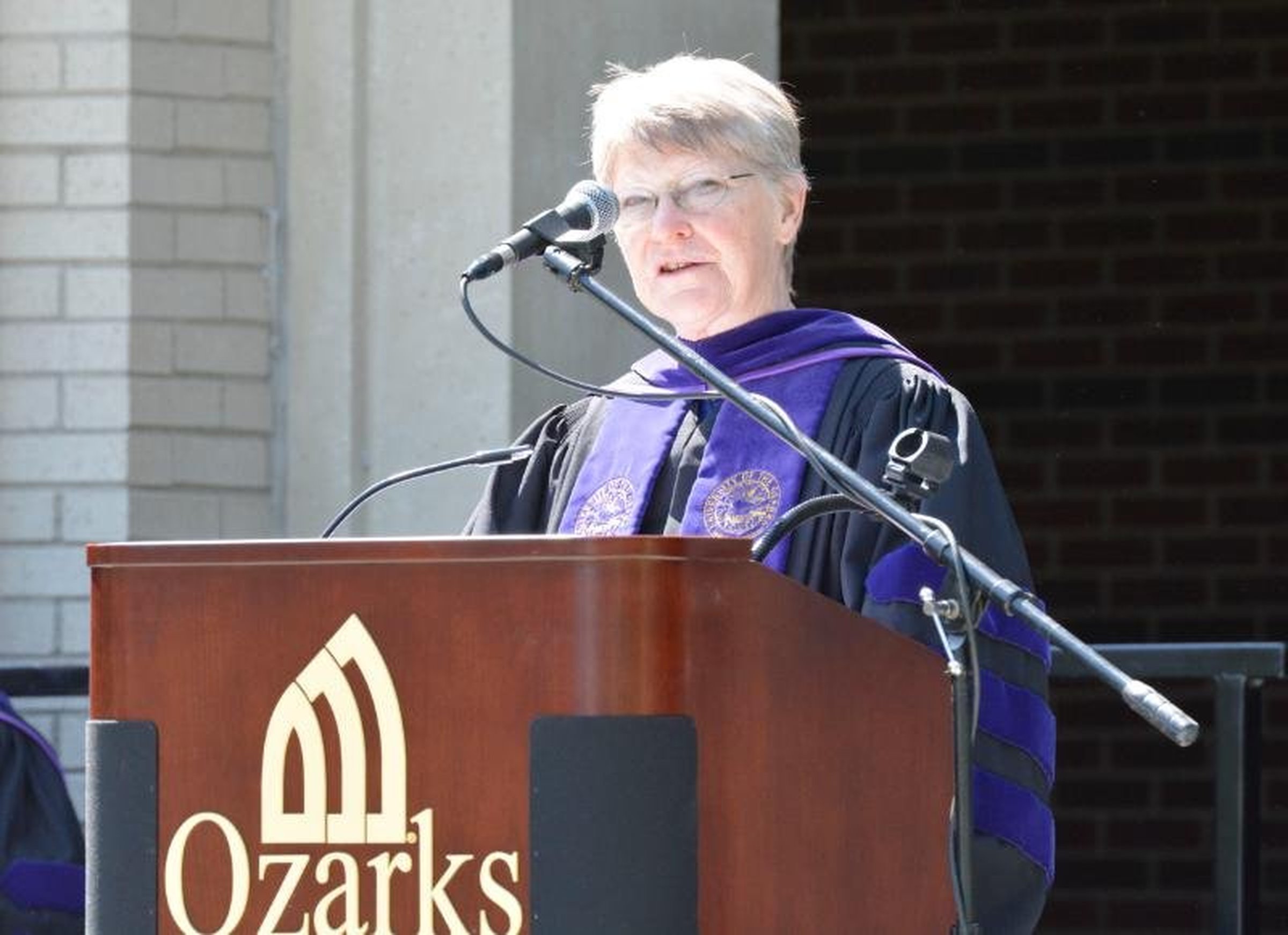 Susan Smith Epperson spoke at the University of the Ozarks’ spring commencement ceremony in 2016. A 1962 graduate of what was then known as the College of the Ozarks, she was the daughter of T.L. Smith, the school’s much-loved biology professor. She would go on to successfully challenge Arkansas’ ban on the teaching of evolution. (Vinnie Tran/University of the Ozarks photographer) 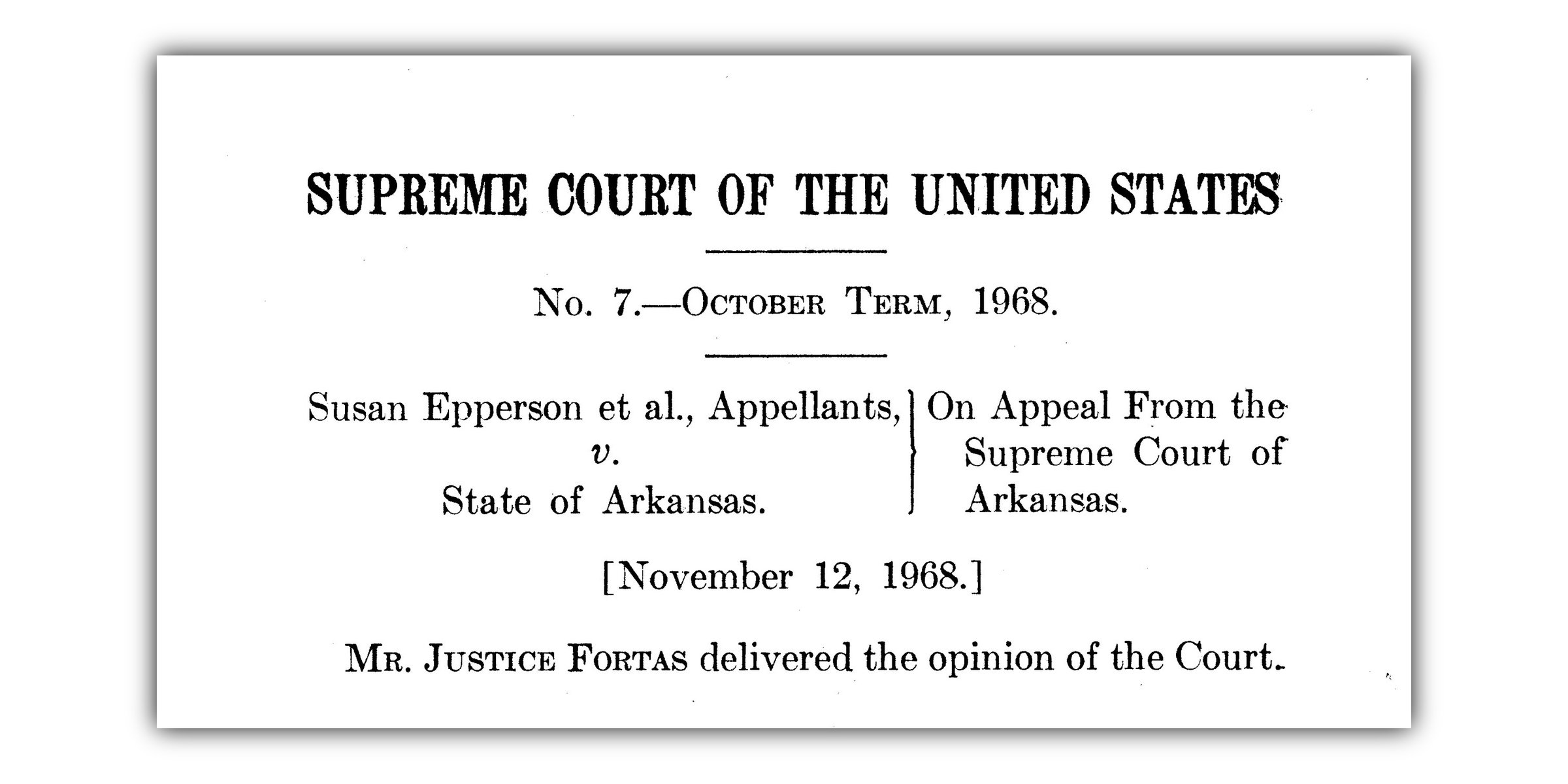