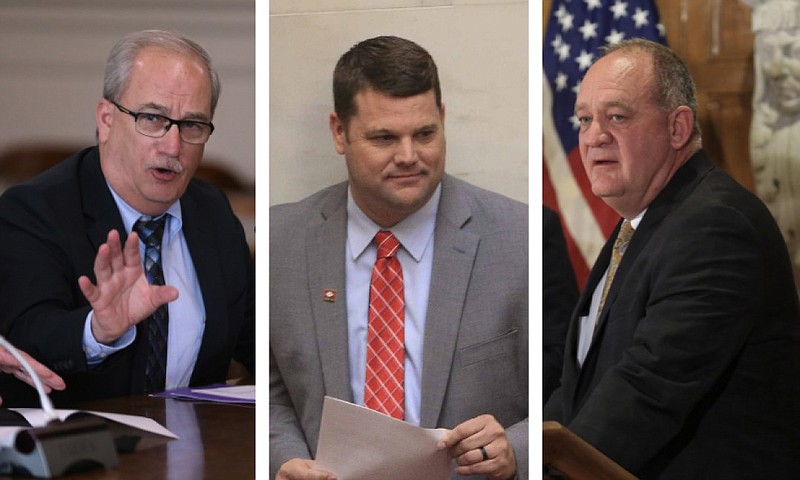 For the second time in the past two years, Sens. Jimmy Hickey, R-Texarkana, and Bart Hester, R-Cave Springs, are vying to be the Arkansas Senate's leader.

But there is a third candidate this time -- Sen. Kim Hammer, R-Benton -- in the deeply divided Senate.

For his part, Hammer praised Hickey's leadership in difficult times.

Hickey has served as the Senate leader, or Senate president pro tempore as the post is known, since January.

Sen. Jason Rapert, R-Conway, tweeted last week: "Time for new leadership," in response to an Arkansas Democrat-Gazette reporter's tweet about Hickey signaling that he's seeking a second two-year term as president pro tempore. Rapert is not running for reelection; instead he is seeking the Republican nomination for lieutenant governor.

Rapert's tweet came several days after the Senate voted 23-11 on Dec. 9 to approve Hickey's motion to adjourn a three-day special legislative session that was called by Republican Gov. Asa Hutchinson primarily to enact a package of income tax cuts. The adjournment came before the chamber could consider a motion by Rapert to extend the session.

Rapert wanted the Senate to stay in session to consider his proposed bill that would couple a civil cause of action with a ban on abortions except to save to the life of the mother. The civil cause of action is included in a Texas abortion law. Arkansas' law bans abortions except to save the life of the mother, but it has been enjoined by court order.

Sen. Jim Hendren, an independent from Sulphur Springs, said Friday that Senate leadership races can be divisive and destructive.

Hendren, who was president pro tempore from 2019 until early 2021, said he hopes that's not the case in the Senate, to avoid adding to the dysfunction there and in the Legislature.

The Senate will select its president pro tempore-designate at the end of the fiscal legislative session, which starts Feb. 14.

After next November's general election, the chamber will elect the Senate president pro tempore for 2023-25 during its organizational session to prepare for the next regular session, which starts in January 2023.

The state Senate currently has 26 Republicans, seven Democrats and an independent. One Senate seat is vacant because of the October resignation of Sen. Lance Eads, R-Springdale. A special election is set for Feb. 8 to fill that seat. All 35 Senate seats are up for grabs in next year's general election.

Hammer, 63, is pastor of Saline Missionary Baptist Church in Tull.

In April 2020, the Senate chose Hickey over Hester to be the president pro tempore-designate.

In November 2020, the Senate Republican caucus selected Hickey over Sen. Blake Johnson, R-Corning, as its nominee to be president pro tempore before the entire Senate elected Hickey in the leadership position for the 93rd General Assembly. He succeeded Hendren.

Hester said in an interview last week that he is seeking the leadership post for a second time because these are exciting times for the state.

He said it looks like Republican gubernatorial candidate Sarah Huckabee Sanders will succeed Hutchinson, who can't seek reelection under the state's term limits amendment, and she has indicated that she wants to bring "generational change" and "real change" to the state.

Four Democrats and a Libertarian candidate also have announced their plans to run for governor next year.

Hester said he wants to represent the Legislature in bringing significant change to the state.

Sanders and her campaign manager Chris Caldwell last week declined to spell out what generational and real changes she has in mind. Sanders served a stint as White House press secretary for then-President Donald Trump and is the daughter of former Republican Gov. Mike Huckabee.

Hester said the state Senate doesn't have enough conservative positions "being represented at the top, and I think the majority of my colleagues will agree with that."

He said he decided to run for president pro tempore before this month's special session, but the adjournment highlighted why it's time for new leadership in the Senate.

Hester voted against Hickey's motion to adjourn the special session.

Hickey and Hammer voted for that motion.

Hester said he would do a better job of communicating and representing the Senate than Hickey has done.

"It is a collective body and not a one-man show," he said.

Hickey said "I 100% disagree with" Hester's suggestion that the Senate doesn't have enough conservative positions being represented by him.

The income tax cut package that state officials project eventually will provide nearly $500 million a year in tax relief "is the most aggressive you could have expected," he said, and the state has accumulated a catastrophic reserve fund of about $1.2 billion.

Hickey said he's a social conservative, and Arkansas is "the most pro-life state in the nation."

In November, Americans United for Life announced that Arkansas is the "most pro-life" state in America for the second year in a row.

On Dec. 10, the U.S. Supreme Court left in place Texas' ban on most abortions while the law is considered in lower courts. The Supreme Court also is considering a Mississippi case involving a law that would further limit the time when abortions can be performed.

Hickey said he doesn't believe that Hester would do a better job of communicating and representing the Senate.

"Obviously, it is not a one-man show," he said. "Everybody has a vote."

Hickey said senators generally felt that they had lost power to the executive branch before his election as president pro tempore, and that was successfully changed under his leadership.

He said Hester and Hammer are "excellent members," but he believes he is probably more qualified to be president pro tempore.

"That is nothing disrespectful to these members in any way, shape or fashion," he said.

Hickey said he decided to run for Senate president pro tempore in the past few weeks because "I think we have done a lot of good things over the last year" with the legislative and executive branches and navigated difficult times amid the covid-19 pandemic.

He said the vast majority of senators "trust me and know I am going to tell them the truth."

Hammer said he wants to be the president pro tempore because he believes he can use his experience, personality and reputation to allow the Senate to advance good, solid legislation that continues to advance the direction that the state is going in.

He said Hickey "has been a good leader for the difficult times that we have gone through."

Hammer said he wants all senators to be able to present their legislation.

He said the Senate is viewed as a very strong-willed body sometimes with strong differences of opinion, which is a healthy environment to ensure the Senate can get good legislation passed.

"I want to make sure that it is an environment in which there is healthy debate while maintaining mutual respect for individual senators and the Senate body as a whole," Hammer said.

He said he believes his length of service in the Legislature has prepared him to be the Senate leader.

Hammer said he decided three or four months ago that he would run for the post, and he informed his colleagues of his intention after the special session adjourned Dec. 9.

He said a Senate rule barring a president pro tempore from serving two terms is a good precedent that the Senate should keep in place.