Christmas lights bring 'all the feels' in these towns 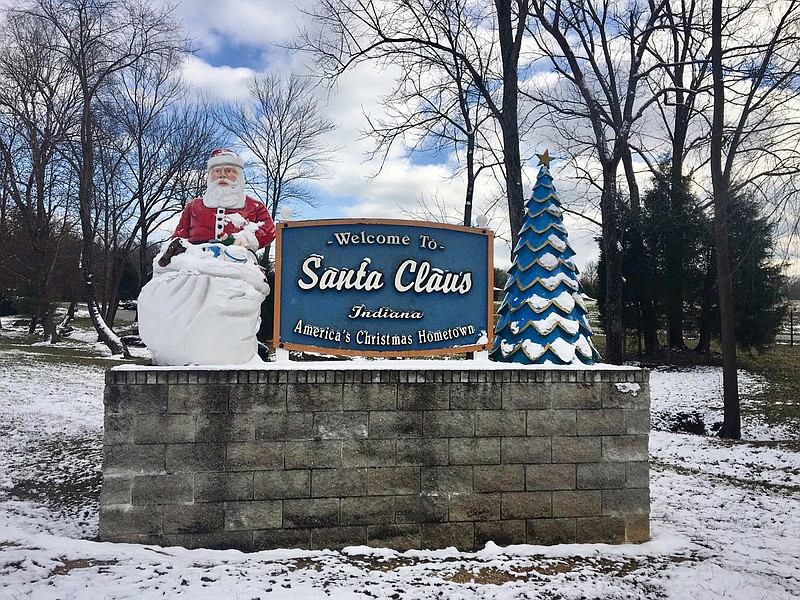 Most neighborhoods have that house that treats Christmas decorating like a competitive sport. But in a handful of places, the townspeople go a step — or several steps — further. Think 35 flavors of hot cocoa. Think advent calendars come to life. Think miles and miles of lights, where Buddy the Elf's dreams come true.

After a subdued and social-distanced holiday season last year, three cities that double as Christmastime attractions are celebrating in a more robust way this year. Many activities are outdoors, making them well suited for pandemic-era precautions.

Santa Claus, Ind., and Bethlehem, Pa., both have identities built around the holiday. And McAdenville, N.C., grew its Christmas reputation over the past six decades. Here's how they spend the season.

Most of the year, strangers have no reason to stop in the tiny town of McAdenville, N.C.

But then December arrives, and McAdenville takes on its trademarked alter ego: "Christmas Town U.S.A.," a mile-plus stretch of holiday lights and decorations that draws an estimated 600,000 visitors every year.

"Visitors can expect a Town that shines with holiday cheer," every night between 5:30-10 p.m. through Dec. 26, McAdenville's official website says. There's a tree-lighting ceremony on the first day featuring a local child, and the Yule Log Parade was Thursday. In 2020, the town encouraged visitors to stay in their cars.

The tradition dates back to the mid-1950s, when a grassroots decorating effort caught the interest and financial backing of the founder of Pharr Yarns, a textile mill and major employer. Now known just as Pharr, the company has continued to deck out the common areas of town over the decades.

As for the rest: That's up to the several hundred residents, some of whom have moved to McAdenville because of the festivities. Lifelong resident Steve Rankin, a member of the Christmas Town committee and webmaster of McAdenville-ChristmasTown.com, says they take the responsibility seriously.

"We have real homes that people decorate at their expense," he said. "We get nothing out of it except the pleasure of ... seeing the joy on people's faces."

The town encourages visitors to arrive early, order Italian food from Terra Mia Ristorante, grab dessert at Floyd & Blackie's Bakery, or shop at a handful of other stores before walking or driving through the lit-up streets. Local churches may serve free coffee or hot chocolate.

Despite the hospitality, visitors shouldn't make themselves too comfortable. Rankin, 82, said a resident once left his front door open to showcase the Christmas tree inside — then realized as he watched TV in the den that the house had filled with people. Now, he said, many homeowners include ribbons around their lots as a reminder for tourists to stay on the sidewalk.

"This is a real town," he said. "It's not an amusement park. It's not Disney World."

The December traffic can also require residents to plan ahead.

"Get those errands run by 5 p.m. and get home," Rankin said. "I'm not complaining; we love it. I think everybody in McAdenville loves it. For 26 days, we just adjust our schedule."

Conventional wisdom dictates that jolly old St. Nicholas lives in the North Pole, but he actually splits his time between there and his hometown, Santa Claus, Ind. — at least according to local lore.

He should feel comfortable there, among the Santa Claus Museum & Village, Santa's Candy Castle, the Holiday World theme park and a 22-foot statue of himself.

Summer is the busiest season in Santa Claus, thanks to crowds that flock to Holiday World and its water park. But while Christmas is a theme year-round, "December really shines," said Melissa Arnold, executive director of the Spencer County Visitors Bureau.

Local elves are busy, too: letters addressed Santa at P.O. Box 1, Santa Claus, IA, 47579 get answered at the museum. And the local post office goes through more than 400,000 pieces of mail to add a specially designed Santa Claus postmark, Arnold said.

It was the quest for a post office that got the town — once known as Santa Fe — its name in 1856. After the initial application was denied because another Indiana community had the same name, locals settled on Santa Claus during a holiday church service, Arnold said. That original post office is now part of the museum.

"I think for the most part, it's kind of a given that if you're going to live in a town called Santa Claus, you kind of have to love Christmas," Arnold said.

With a population of about 76,000, this Bethlehem in eastern Pennsylvania is a not-so-little city. But its history is deeply rooted in the holidays: it was named on Christmas Eve in 1741 by members of the Moravian Church.

Its history as Christmas City is more recent. According to Historic Bethlehem Museums & Sites, the city was looking for ways to draw visitors in 1937 when the local chamber of commerce came up with the idea of capitalizing on the holiday connection.

In the historic downtown area, a live advent calendar typically draws visitors to the oldest home on Main Street every night at 5:30 p.m. through Thursday. Organizers pick a child to knock on the door, and whoever is behind it offers some kind of treat, such as candy, a holiday reading, a Santa appearance or a holiday performance by a local musician. In 2020, the town streamed video of past calendars.

"It feels like a Hallmark Christmas card, a Lifetime movie," she said. "It definitely gives you all the feels."