Royals rout a present to Lions 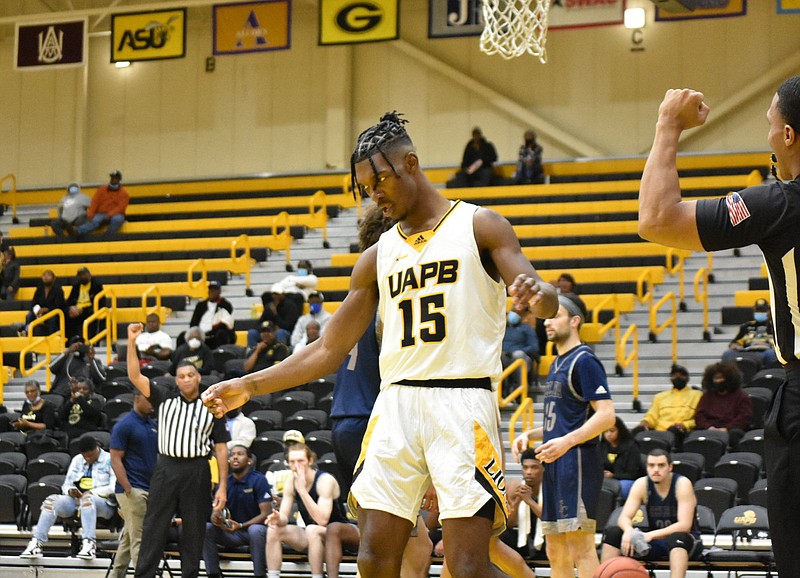 A.J. Stredic of UAPB reacts after making a basket as he was fouled by Ecclesia College in the first half Saturday, Dec. 18, 2021, at H.O. Clemmons Arena. (Pine Bluff Commercial/I.C. Murrell)

Solomon Bozeman received one of the most invaluable presents for his 34th birthday -- a win.

Bozeman's University of Arkansas at Pine Bluff men's basketball team feted him with a 97-56 home win over Springdale's Ecclesia College on Saturday, closing the nonconference portion of their schedule and going into a 16-day break before hosting Alabama A&M University.

"This is a good birthday present," Bozeman said after Stevie Wonder's rendition of "Happy Birthday to You" blared through the public address system. "We got the 'W,' and we got better defensively. We just got to continue to take it to another level. I'm proud of the guys' effort. I feel like the guys are starting to come together and be more a family. And on the offensive end, we're starting to share the ball better."

UAPB (2-11), which ended a four-game losing streak, set a season high for points after the University of Texas held the Golden Lions to a season-low 31 points on Tuesday. The 56 points by the Royals (6-6) of the National Christian Collegiate Athletic Association is the least the Lions have given up this season.

"Honestly, before Texas, I don't think we touched a ball until the day before the game," Bozeman said. "We focused all on the defensive end, so I was proud of how we went up there and guarded against Texas. We held them to under 69 points (63), which was our goal. We really looked at it as we improved and got better, and to come back and do it again, it's just proof we're getting better and headed in the right direction."

That staunch commitment to defense helped UAPB hold Ecclesia without a point for several long stretches.

"We've been having a crazy week with defense, and I feel like that got way better," said senior guard Shawn Williams, who scored 15 points. "Defensive slides, diving to the floor, it's just been a crazy week."

Impressively, UAPB set the season high without swingman Trey Sampson, who missed his second straight game with an unknown illness. Sampson is the team's third-leading scorer at 12.3 points per game.

But the offense got a big jolt from Pine Bluff High School graduate Dequan Morris, who led all scorers with 23 points in just his third game back from a knee injury.

"My teammates get me in position and I just play off that," Morris added.

The Lions led for 39 minutes and 12 seconds, trailing only 3-2 for an 8-second stretch. They scored 44 points off 25 Royals turnovers and committed only 4 mistakes themselves, and they made 31 of 65 shots from the floor for 47.7%.

"I feel like we played more as a team on offense as well as on defense, just getting out in the break and pushing it," Morris said. UAPB outscored Ecclesia 25-2 in fast-break points.

"We've got that fight we've been saying we had," Williams said. "It's just finally coming along now."

A fast-break offense gave the Lions the spark they wanted as they raced to a 26-11 lead on a Milton dunk with 9:19 remaining. They held the Royals scoreless for nearly 5 minutes and boosted the lead to 35-11 before Shamar Jones sank a 3-point basket to end the drought.

Brown's layup with 4 seconds left in the half gave the Lions a 48-23 lead, but they were shut out the first 4 minutes of the second half, although Ecclesia never pulled within closer than 51-31.

UAPB tried to get to 100 points in a frenzied final 3 minutes but fell just short of its first century mark this season.

Meron Ghebreysus and Jaquan Dotson each scored 14 points for the Royals.

The UAPB women's team will play at the University of Central Arkansas at 1 p.m. Tuesday. 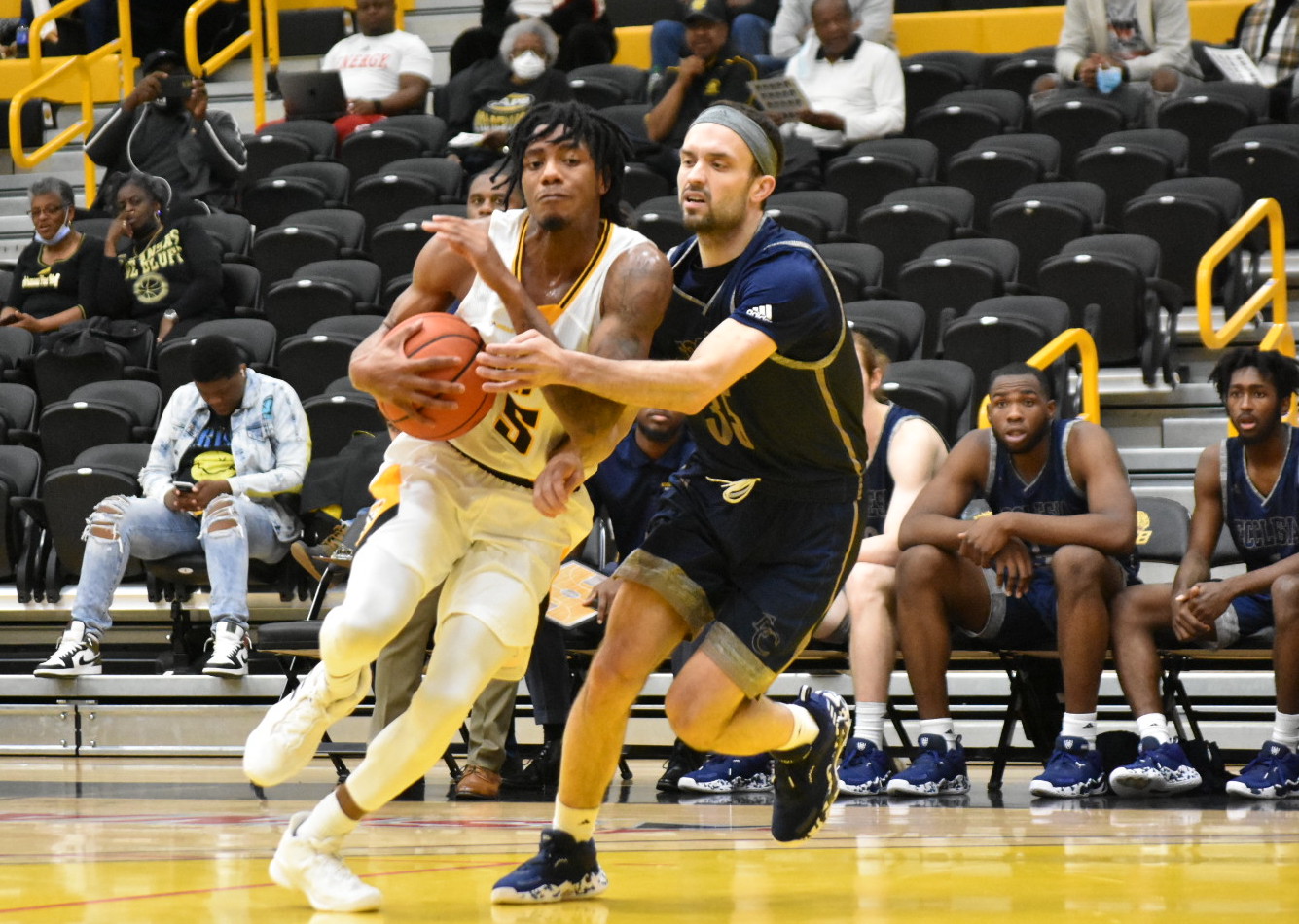 Dequan Morris of UAPB drives to the basket against Matthew Claudio of Ecclesia College during the first half Saturday, Dec. 18, 2021, at H.O. Clemmons Arena. (Pine Bluff Commercial/I.C. Murrell) 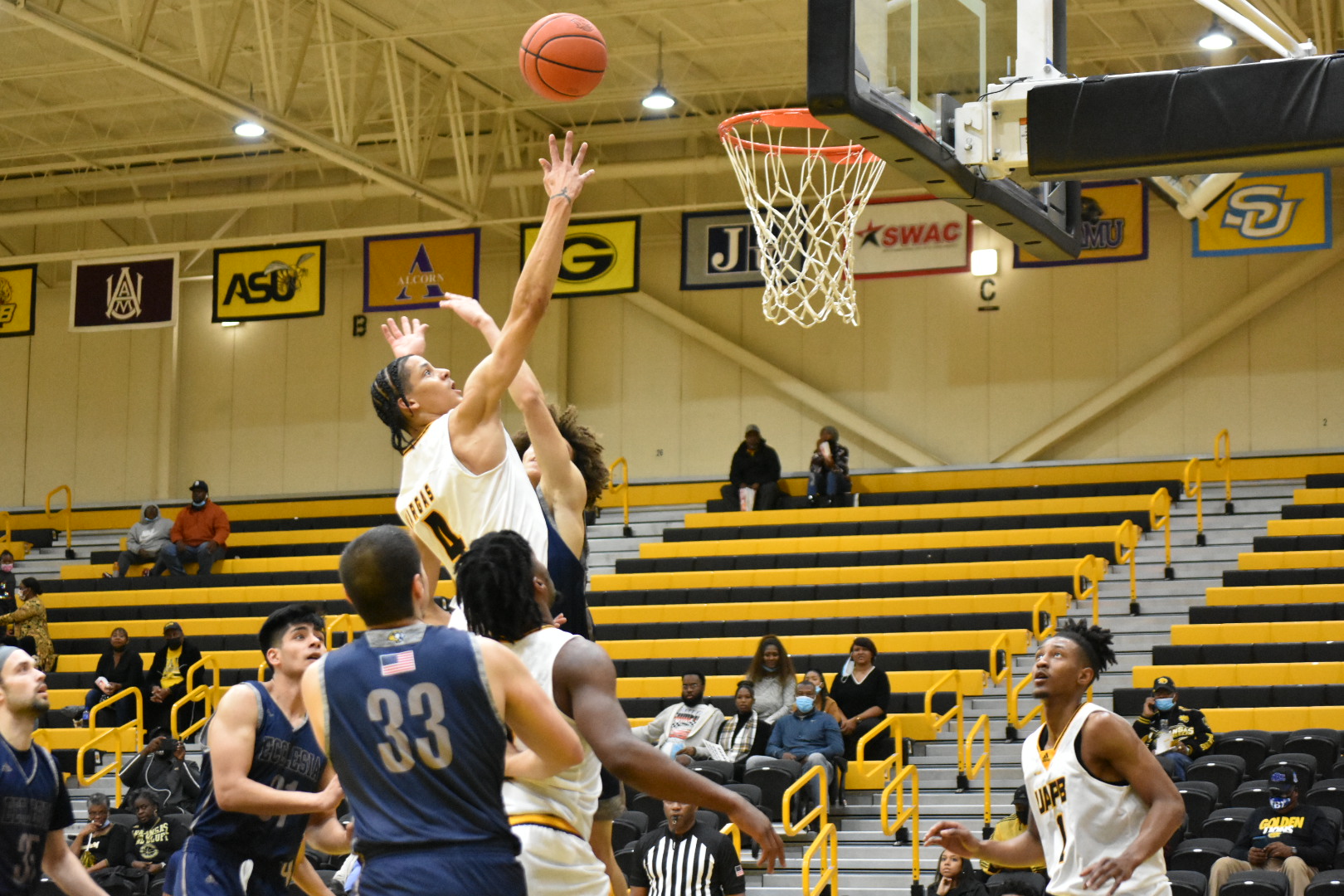 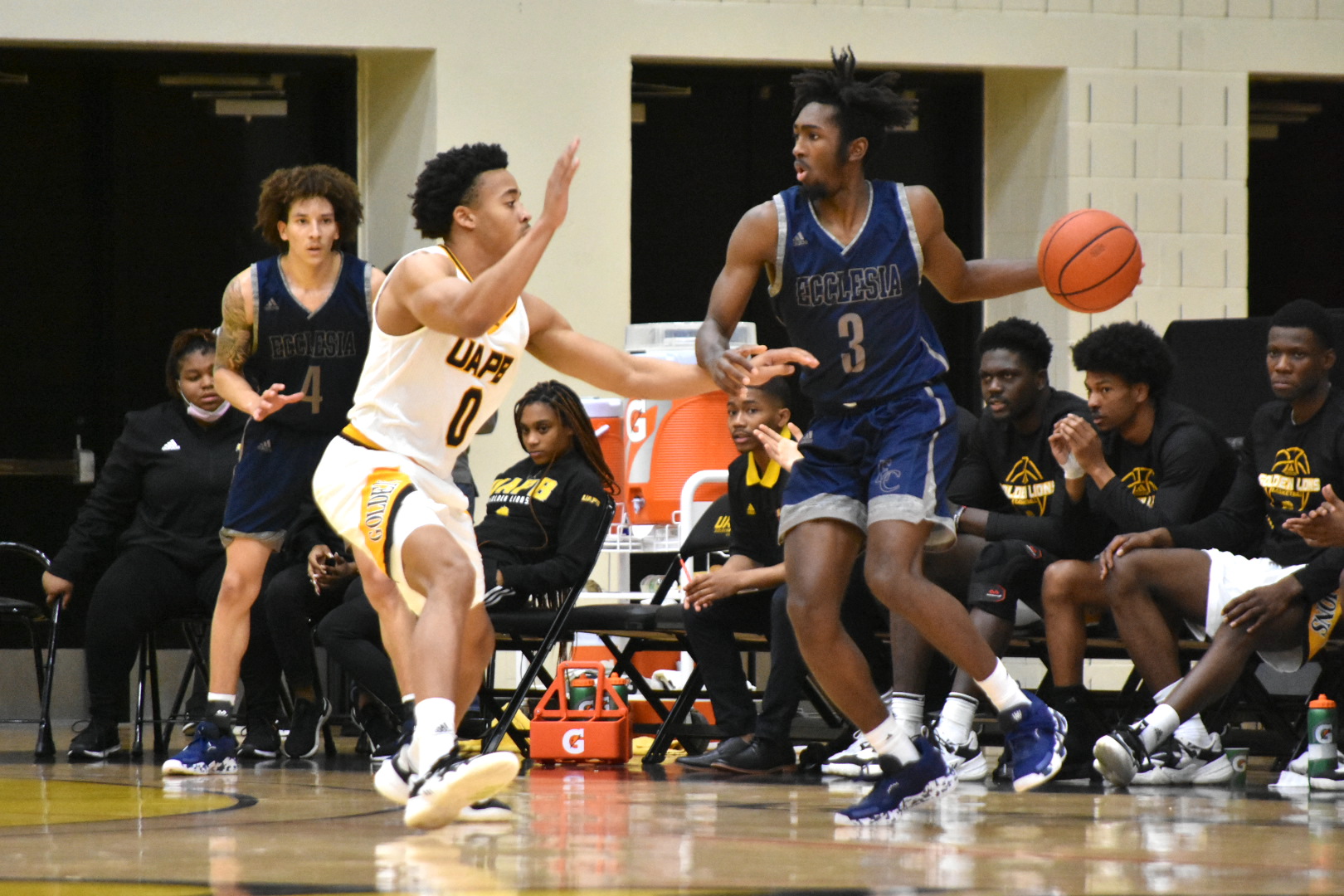