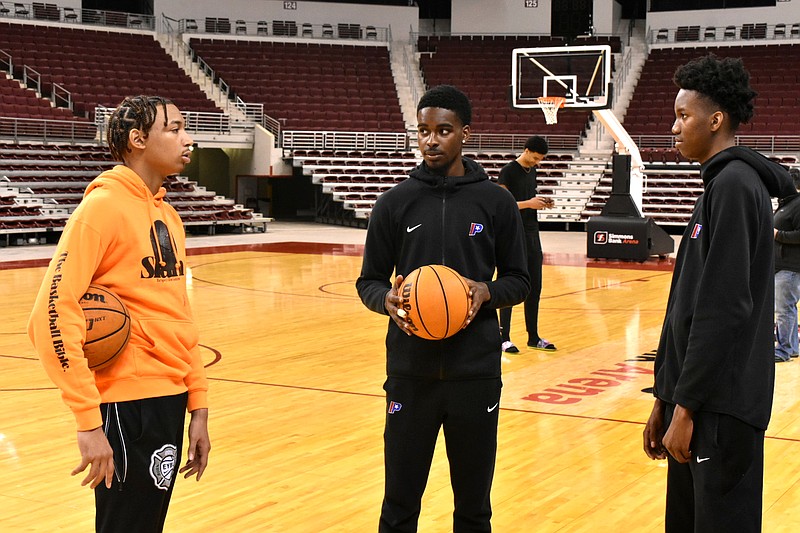 Editor's note: This is the third in a series of features leading up to the return of the King Cotton Holiday Classic, one of the premier high school basketball tournaments in the nation. The tournament is scheduled for Dec. 27-29 at the Pine Bluff Convention Center.

Nick Smith Jr. wasn't born when the King Cotton Holiday Classic ended its initial 17-year run in 1999, but the importance of the tournament isn't lost on the North Little Rock High School senior.

"First of all, just playing in Arkansas" before the start of conference play is an opportunity he doesn't take lightly, Smith said. North Little Rock was 7-1 heading into Saturday's game against Dr. Phillips High School (Fla.) in the Fort Myers City of Palms Classic.

The reigning 6A champion Charging Wildcats have also journeyed down to Texas where they defeated Dallas Kimball High School, and have knocked off other out-of-state talent such as Dallas Oak Cliff Faith Family Academy and Richardson.

"Playing in front of my friends and family, it's cool especially playing with a big-time tournament like King Cotton bringing it back," Smith said. "It's going to be a pretty big thing."

Smith, a 6-foot-4 combo guard, is the nation's seventh-ranked and state's top-ranked player, according to 247Sports.com. He signed recently with the University of Arkansas, which will see him and other recruits – including 6-4 Magnolia combo guard Derrian Ford – take part in the three-day King Cotton Holiday Classic.

The tournament is held in an arena that was a regular stop on the University of Arkansas' men's basketball schedule from its 1976 opening to 1992, the year before the Razorbacks moved into Bud Walton Arena. True to its history, King Cotton – back for the third time in the last four years – remains a popular holiday destination for (potential) future Hogs and other Division I signees and recruits.

Remember Corliss Williamson and Russellville in 1991? Kareem Reid and New York St. Raymond in 1993? What about Joe Johnson and Little Rock Central High in 1998?

"When I was younger, right when I started coaching, it was the biggest tournament around," 10th-year North Little Rock Coach Johnny Rice said. "I started coaching 20-something years ago and we got to play in it. That was super-exciting, so when we got that opportunity, I knew that would be on my bucket list. I'm not going to be around forever. I want to put that on that we played in it."

Soon, King Cotton will be scratched off.

Pine Bluff High School fans may remember Smith from March's 5A state quarterfinals. That's because he sank the winning basket with 42 seconds left in Sylvan Hills' 43-42 victory over the Zebras in Hot Springs. Eventual runner-up Maumelle eliminated Sylvan Hills in the semifinals.

But days after the King Cotton field was announced in October, Smith needed a waiver to be signed by both the Pulaski County Special and North Little Rock school districts to be cleared to compete as a transfer to the Charging Wildcats.

"It's more organized and they take their athletics seriously," Smith said of North Little Rock. "Coach Rice and my teammates, we're just trying to conquer one goal, and that's the end of year, for them trying to win another state championship."

Smith is also surrounded by Division I talent at North Little Rock, like 6-foot-11 University of Oregon signee Kel'el Ware and 6-5 three-star player Corey Washington, who is recruited by UA Pine Bluff and UA Little Rock, among others.

Ware has benefited from Smith's arrival across the Sherwood-North Little Rock line.

"He's been able to handle the ball and create a lot of shots for everybody else with people having to draw their man in, drive in and make the big help me throw lobs," Ware said. "It's actually great because we all have got the same mindset and the same goal, just to be able to reach and make it past college and make it to the NBA."

"It definitely excites me just to see where I'm at, not just against players my age but older players," Thomas said. "It's always nice to see where you fit in."

Thurman has taught the Patriots a lot about making it to college basketball's grandest level, Wallace believes.

Smith could possibly engage in a border war of sorts against Tennessee's top-ranked player, 6-8 small forward Brandon Miller of Antioch Cane Ridge. Miller has signed with the University of Alabama and will share the court with Smith when they duel in the Southeastern Conference.

The matchup will come true if North Little Rock beats Shreveport Calvary Baptist and Cane Ridge defeats Pine Bluff – or if the opposite in both games happens.

"Brandon Miller is like my best friend," Smith said. "Me and him talk every day, just seeing him come down here. We may play against each other. He's going to try to rip my head off. I'm going to try to rip his head off. You know, just having that type of competition, that's something we're looking forward to."

Next Saturday: Checking in with the Pine Bluff Zebras.