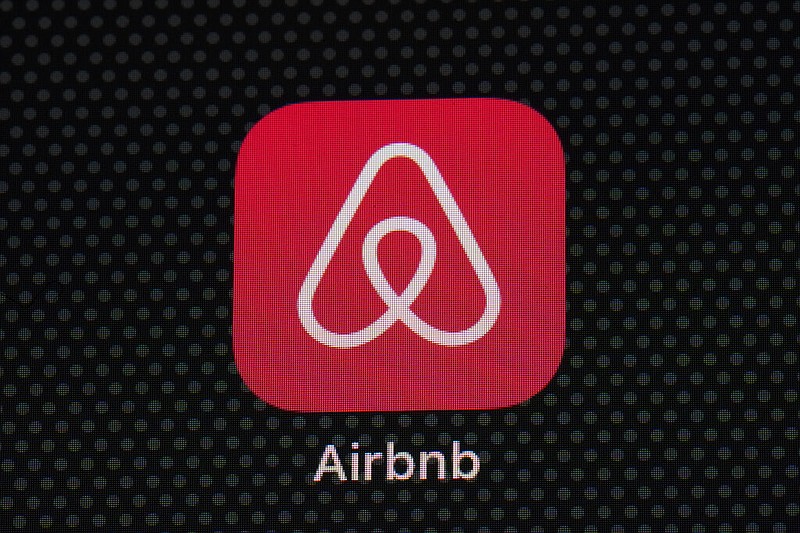 The Airbnb app icon is seen on an iPad screen in Washington in this May 8, 2021, file photo. (AP/Patrick Semansky)

FAYETTEVILLE -- The city may tweak its rules on short-term rentals to help get more through its regulatory process.

City staff members are working through hundreds of applications for short-term rentals to operate in the city legally, Development Services Director Jonathan Curth told the City Council on Tuesday. A few are hung up in the process because of unintended glitches in the city's ordinance regulating the rentals, he said.

The city estimates there are 500 to 600 short-term rentals, such as Airbnb or VRBO locations, operating in the city. In April, the City Council adopted an ordinance allowing them to operate legally, since they technically fell under a hotel and motel use in city zoning codes. The city's residential districts, where most short-term rentals operate, don't allow hotels or motels.

As of Tuesday, the city had received 329 applications for the rentals and approved 148 of them. Staff is trying to get the word out to short-term rental owners they need to go through the city's process to operate legally. Several of those who have applied have gotten caught up because they lack necessary documentation or are unprepared at the time of a building inspection, Curth said.

Owners have until Feb. 21 to get a permit from city staff, rather than the Planning Commission. Normally the commission grants such permits, requiring a public hearing. In November, the City Council extended the grace period in which owners could bypass the public hearing and get the permit from staff instead.

Curth proposed a few changes to the ordinance the council could consider in the future. For one, short-term rentals could be allowed in all zoning districts. Right now, they're allowed only in districts that also allow residential uses. Few of the applications the city has received were from rentals operating in commercial or industrial districts, Curth said.

However, the city's code doesn't distinguish between different types of multifamily buildings, Curth said. As a result, only a portion of units owned by different property owners in a condominium could become short-term rentals. There are about 20 applications on hold in that situation, Curth said.

The exempted properties would have to adhere to a set of structure-specific basic safety standards, such as firewalls between units, sprinklers and clear access to stairways, Curth said.

The city's ordinance classifies short-term rentals as Type I or Type II. Type I rentals are homes with full-time occupants with a room or two made available for nightly stays. Type II rentals are residential units that accommodate guests full time.

Both Type I and II rentals have to get business licenses and building inspections from the city. Type II rentals must also get conditional use permits, which allows a certain land use within a zoning district.

Short-term rentals also have to collect and remit the city's 2% hotel, motel and restaurant sales tax. Half of the revenue from the tax goes to tourism promotion; the other half goes to parks.

Logan Humphrey, owner of Cohobnb, said the city's process smoothed out over time. At first, getting all the documents correct and submitted on the city's website was a little difficult, he said, and building inspections could be inconsistent.

The city has since streamlined the process, Humphrey said. Cohobnb manages several vacation rentals owned by different property owners and has gone through the process 30 or 40 times, he said.

Humphrey said the proposed changes make sense, and the city has been responsive to suggestions on tweaks to the ordinance.

"Overall our experience with the ordinance process has been quite seamless after the first month, with those hiccups," he said. "Now we're so in tune with what's needed that we quite literally have a PDF template that we send to all our new clients. They just follow the instructions and we just kind of plug and play."

Rogers has a similar procedure to Fayetteville. Owners of short-term rentals need to get a use permit from planning staff, undergo a building safety inspection and get a business license, according to Peter Masonis, city spokesman. The rentals are allowed only in zoning districts that allow residential uses. The city collects a 3% lodging tax on the rentals.

Officials estimate there are about 100 short-term rentals operating in Rogers. So far, about 15 have gotten business licenses, Masonis said.

For more information on how to apply for a business license for a short-term rental in Fayetteville, go to: http://bit.ly/faySTRs