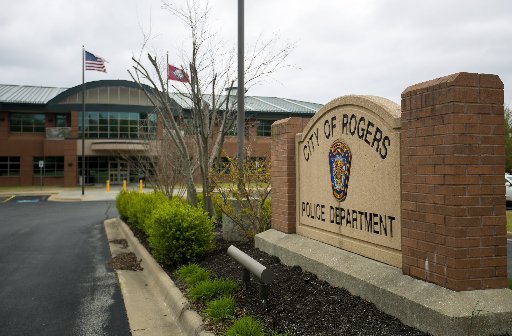 ROGERS -- A former Rogers police officer with Tourette syndrome recently gave up his legal battle to regain his job after being fired for saying a racial slur during a training exercise.

Byron Flickinger sued the city on Oct. 8 in response to the Civil Service Commission upholding his firing at a Sept. 3 hearing. The lawsuit was dismissed Nov. 29 at Flickinger's request.

George Rozzell, one of Flickinger's attorneys, said Thursday that his client resolved the matter with the city. Flickinger's appeal was in Benton County Circuit Court.

"Mr. Flickinger is a dedicated police officer and will continue in that role," he said.

Flickinger, 31, is now an officer with the Decatur Police Department.

The Rogers Police Department hired Flickinger in March but fired him May 24, about three weeks after the training exercise incident where Flickinger said the word, which is directed at Black people.

Flickinger appealed his firing to the five-member commission. Four commissioners were at the hearing. Their vote to uphold Flickinger's firing was unanimous.

John Pesek, a staff attorney for the city, said at the commission hearing there was no guarantee Flickinger wouldn't say the word again. It's a policy issue, not a character issue, Pesek said. Flickinger disclosed having Tourette syndrome during the hiring process but didn't disclose a racial slur was one of his trigger words, Pesek said.

Flickinger testified he's never had any issues in public while working in law enforcement. He said he can control his tics. He said he's had the condition for 24 years and learned ways to control it.

"I'm not triggered to say it when I see a person of color," he said.

Flickinger said he believes he answered all questions honestly during the hiring process. He didn't deny using the slur.

Flickinger, however, did write about the situation in a Facebook post, which was contained in documents the Northwest Arkansas Democrat-Gazette obtained through a Freedom of Information request to the city.

"I've had a lot of time the past few weeks to tread through some really rough emotions," Flickinger wrote in the post. "I feel like I'm in a state of mind where I can logically express what's been on my mind and what Rogers PD drug me through. They hired me knowing that I have Tourette's. I mean...it's not like I can hide it."

Complex vocal tics may include repeating one's own or others' words or phrases, according to the National Institute of Neurological Disorders and Stroke.

His Facebook post also stated he has coprolalia -- an uncontrollable tendency to use vulgar or obscene language, which affects about one in 10 people with, according to the Centers for Disease Control and Prevention.

"By no means do I speak these things from the heart...it just happens to be a symptom that I'm stuck with and I do a very good job at suppressing and disguising those tics," he said in the post.

Flickinger worked a few years for the Washington County sheriff's office, then for three years as an officer with the Centerton police.

He left Centerton to pursue his dream job with the Rogers Police Department, Drew Miller, one of Flickinger's attorneys, told commissioners at the appeal hearing. Flickinger was born and raised in Rogers and always wanted to work with the department, Miller said.

Wesley Frazier, a Rogers police officer, testified at the commission hearing about the May 4 training exercise. He said he was helping train new recruits at a house at Arkansas Law Enforcement Training Academy in Northwest Arkansas.

Flickinger and two other recruits were clearing the building while Frazier was hiding behind a door. Frazier overheard Flickinger utter the racial slur. The incident was reported, and an investigation was launched.

Jonathan Best, the department's interim chief, decided to fire Flickinger. He said there's no place at the department for an officer using the word, and it could lead to a disruptive situation if the officer used the word on duty.