Remember when, Arkansas? White Christmas dream came true in 2012, and it was bad 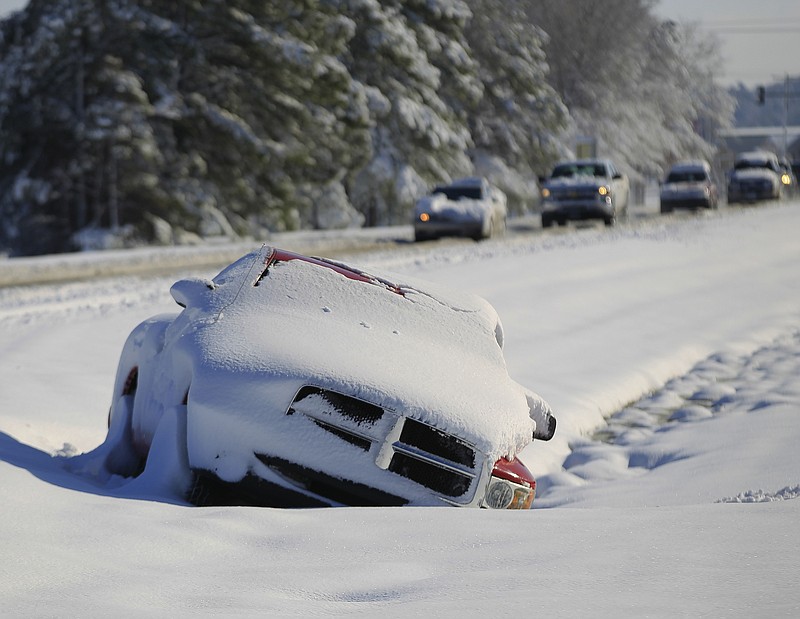 A vehicle abandoned by its driver lies buried in snow along the median of Maumelle Boulevard on Dec. 26, 2012. A historic Christmas snow storm dropped almost of a foot of snow in the middle of Arkansas. (Democrat-Gazette file photo)

Does anyone recognize what's happening in this photo from the archives of the Arkansas Democrat-Gazette?

Hint: Be careful what you wish for.

A rare event occurred in Arkansas on Christmas 2012: It snowed. It snowed a lot.

First came rain. As a storm system tracked across the state, headed from Texas toward the Tennessee Valley, the rain turned into freezing rain.

Notice that there are no carols in which singers dream of frozen rain for Christmas.

But as evening faded into silent night and frigid air wrapped behind the eastward-moving system, down came snow: curtains, wallops and dire thumps of snow.

In Little Rock, about 9 inches fell before midnight Christmas, and another 1.3 inches fell the next day.

All reporting stations in Central Arkansas logged 10 inches or more. Some areas had 12 inches or more. In Perry County, Perry reported 17.5 inches. The snow continued as the storm moved east. Hoxie in Lawrence County got 14 inches.

And lo, the power went out.

By the afternoon Dec. 26, more than 182,000 Entergy customers were without electricity. More than 90,000 of those were in Pulaski County. The lights in 70% of Little Rock residences went out, and parts of the city did not recover for more than a week. Area homeless shelters reached capacity.

At least 20 downed trees blocked streets, and power lines tangled many of those trees. They could not be cleared until Entergy crews dealt with the lines. An estimated 450 trees fell on Pulaski County's 1,100 miles of roads.

Fire crews responding to calls encountered plenty of fallen trees, and some crews cut them up and tossed them aside. But other firetrucks got stuck in the snow and had to wait for the wrecker.

Including the car a Democrat-Gazette photographer found abandoned by its driver along the median of Maumelle Boulevard, crashed, stalled and stuck vehicles littered the region. Travelers were stranded on roadsides for eight hours and longer.

Grocery stores, gas stations, hotels and restaurants were soggy from thawing customers, and the people bought everything — even the fruitcake.

According to the National Weather Service (see arkansasonline.com/1220snow), before the snowstorm of 2012, Little Rock had not received more than a trace of snow on Christmas Day since 1926.