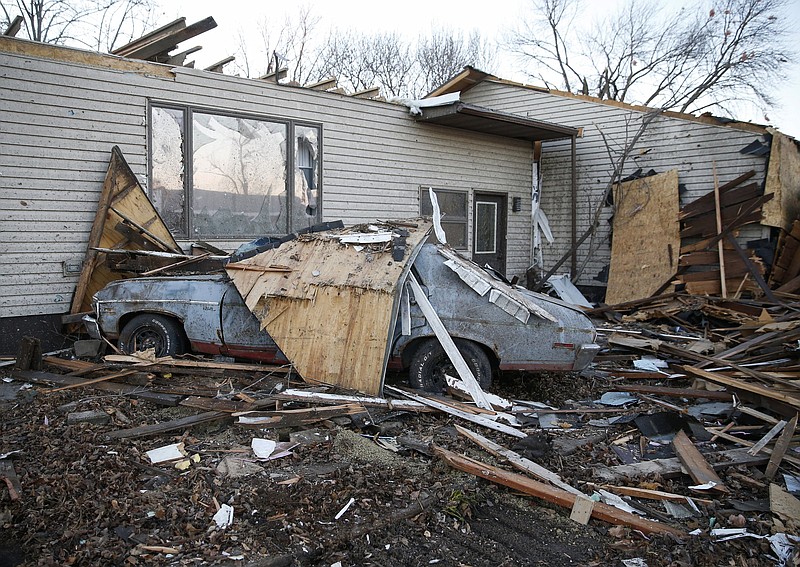 Debris covers a vehicle beside a damaged home in Rudd, Iowa, on Thursday, Dec. 16, 2021, after a band of severe weather with a tornado hit the small north central Iowa town late Wednesday. (Bryon Houlgrave/The Des Moines Register via AP)

O'FALLON, Mo. -- The line of severe thunderstorms and tornadoes that swept across the north-central U.S. last week was the result of a serial derecho -- the first on record in December, officials with the National Weather Service said Monday.

At least 45 tornadoes have been preliminarily confirmed in Wednesday's storms that crossed the Great Plains and Midwest amid unseasonably warm temperatures, said Bill Bunting, chief of forecast operations at the weather service's Storm Prediction Center. Nebraska, Iowa and Minnesota took the brunt of the damage.

Bunting said at least 12 of the tornadoes were rated EF2. Many of the thunderstorms also carried winds of up to 80 mph. Five deaths were blamed on the weather.

Bunting said that normally in December, air from the Gulf of Mexico has cooled and colder air is present in the upper Midwest -- factors that reduce the risk of severe thunderstorms and tornadoes. But this year, "we haven't had much of a winter," he said.

"So you had a very strong storm system with really somewhat unprecedented access to very warm, humid air that flows northward, and those are the ingredients that you look for for severe thunderstorms," Bunting said.

A derecho is often described as an inland hurricane. But it has no eye and its winds come across in a line. The similarity is in the damage, which is likely to spread over a wide area, unlike a tornado where the damage is more spotty.

The weather service said a wind damage swath extending more than 240 miles with wind gusts of at least 58 mph along most of its length can be classified as a derecho.

A derecho was also declared in August 2020 when storms packing 100 mph winds lasted several hours and caused damage from eastern Nebraska, across Iowa and into parts of Wisconsin and Illinois.

There was a difference: The 2020 storm was a progressive derecho, while last week's was a serial derecho.

The weather service said a progressive derecho is fueled by a hot and moist environment with relatively strong winds aloft. Serial derechos are produced by storms with strong winds that bow outward, the service said. They sweep across an area both long and wide, driven by the presence of very strong winds in the atmosphere.

The unprecedented December warm spell included temperatures that rose to 70 degrees as far north as Wisconsin, creating evening temperatures that weather historian Chris Burt compared to that of a "warm July evening."