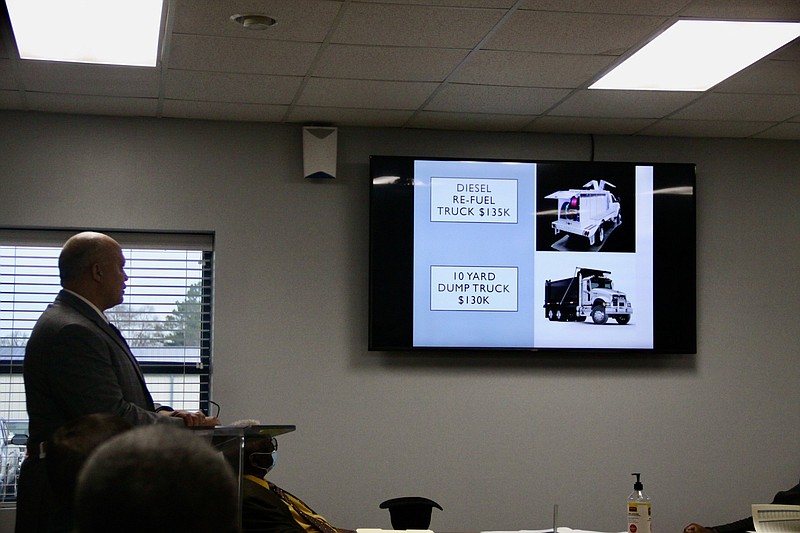 Besides the pandemic, Johnson said the utility was faced with several problems in 2021 including the water crisis that crippled the city after a mid-February winter storm.

He also said he had equipment fail due to flushable wipes that caused stoppages in the collection system and damaged the department's lift stations. Johnson has cautioned the public about flushing the tissues, which don't break down like toilet paper and can clog up and damage the city's wastewater system.

In September, rehabilitation of approximately 11,143 linear feet of gravity sewer main took place in various locations throughout the city

Crews from SAL Construction of O'Fallon, Mo., were in town through Oct. 18 to complete the project.

Pipe diameters ranging 6 to 15 inches were treated with resin-saturated liners.

Johnson said a major project that needed immediate attention, because of an environmental hazard, was the Kansas Street forced main that runs close to the Arkansas River.

"We want to go ahead and put a new parallel line in across the river that will serve Pine Bluff into the future because we know at some point in time that the existing one is going to give," Johnson said previously. "We are operating on borrowed time. It's inevitable at some point in time that it is going to give. We want to prevent that before it happens."

The overall cost of the project is $6.2 million, which Johnson said is available.

The 2022 budget also has $400,000 set aside for the sewer system rehab and improvement, while the remainder of the total budgeted amount of $777,000 is reserved for a 900-gallon diesel refuel truck, a 10-cubic-yard dump truck and a front-end loader.

According to Johnson, the city's front-end loader is over 20-years old.

The electrical maintenance proposed budget of $163,500 includes a 100-kilowatt portable generator and other equipment.

Johnson said $600,000 will be spent to replace damaged screens at the pump station.

A drone upgrade was also approved. Jones said when his workers assisted Liberty Utilities during the water crisis, they discovered a thermal drone technology that made water leak discoveries easier. The new technology allows the drone to color contrast problem areas.

"It's a good resource to find leaks," said Jones, who added that their drone is approximately five years old and lacks the latest technology.

Sewer extension projects for Arkansas 63, University Drive and 73rd Avenue were projects already in the works at an estimated cost of $3.4 million. The University Drive sewer development will cost approximately $2.3 million.