Trojans trying to get well 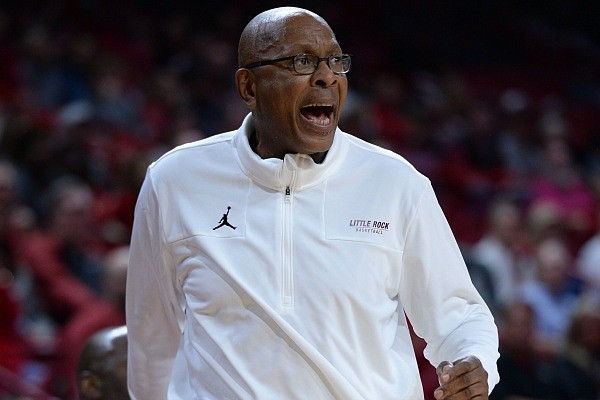 FILE — Little Rock coach Darrell Walker directs his players on Saturday, Dec. 4, 2021, during the first half of play against Arkansas in Bud Walton Arena in Fayetteville.

Darrell Walker knew his team was already going to be decimated when he walked into his office last Tuesday. The University of Arkansas-Little Rock had just seven players when it took to the floor three days earlier.

But missing any more guys? Well, in that case, it'd be pretty hard to play a game.

"The trainer said, 'Coach, these guys have a fever and are throwing up and congested,'" Walker said of the flu that forced UALR to cancel its game at the University of Central Arkansas, "I was going to go play the game, but I couldn't do that with the numbers."

After nine days without a game and nearly two weeks since playing a Division I opponent, the Trojans will host Jacksonville State (5-6) this afternoon, trying to get back to .500 on the season.

And not only will UALR (5-6) have all seven players available that were previously healthy, but it'll gladly welcome forward Nikola Maric back into the mix along with guard C.J. White. Maric, who went down with a hamstring injury against Northern Illinois last month, was averaging 12.8 points and 6.5 rebounds in more than 25 minutes per game.

Walker said Monday that there won't be a minutes restriction on Maric. It's simply going to be a matter of how much his body will allow him to play -- just as it will be with all of the Trojans given that they went multiple days without practicing last week.

"It's been an adventure," Walker added. "The condition and just the sickness, coughing the whole time. ... I had to curtail my practices because guys were struggling to get through everything."

The flu didn't just derail UALR's men. Its women's team was slated to play Alabama at the Jack Stephens Center on Thursday before the game was called off more than 72 hours in advance.

They were then supposed to go to New Orleans for a multi-team event beginning Monday at Tulane, but covid-19 issues within the Green Wave's women's basketball program saw two more contests wiped off UALR's schedule for this week.

When the Trojans open Sun Belt play Dec. 30 at Georgia State, it'll have been nearly three weeks since their last game -- a 73-39 loss at the University of Arkansas on Dec. 12.

Walker, who's now joined his team's wounded thanks to plantar fasciitis that has him in a walking boot, hopes people will take things seriously with the omicron variant of covid-19 striking at a fast pace.

Illness just hasn't hit the UALR program. On Monday, UCA and the University of Arkansas-Pine Bluff canceled their women's basketball game set for today, citing "injuries and illness" within the Sugar Bears program

If Walker had his druthers, there won't be another interruption that adds to what's already been a chaotic and challenging first six weeks.

But knowing what his team's been through, he isn't looking beyond the day in front of him.

"We don't have any excuses but when we made our schedule, our [plan] was to have a full team," Walker said. "I told my team nobody cares."