RECIPES: A good egg — six ultra rich and creamy eggnogs for any season 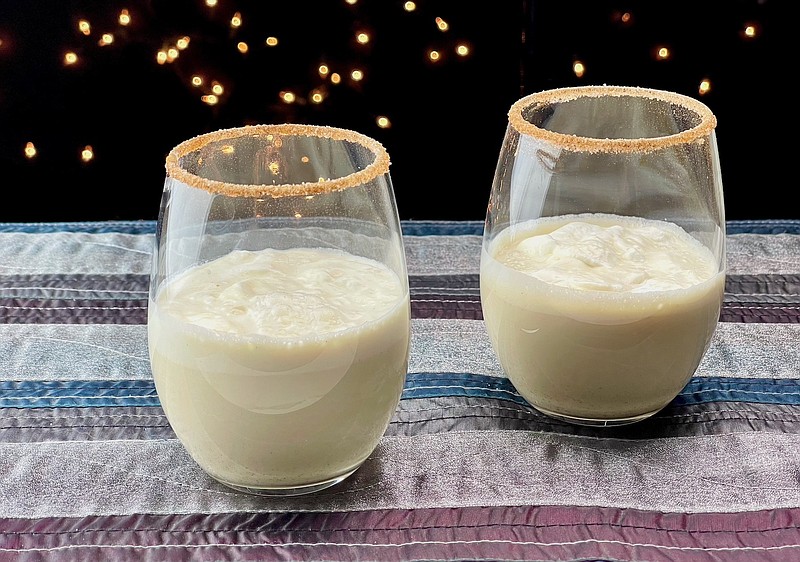 Eggnog as most of us enjoy it is an American creation, but creamy, egg-based drinks — especially those spiked with a hefty dose of booze — are common around the world.

American eggnog is closely related to English posset and Scottish Auld Man's Milk (to be drunk on New Year's Day after a night of revelry). In Germany there's eierpunsch and eierlikor (egg punch and egg liqueur). In the Netherlands you'll find advocaat, based on a Brazilian beverage called "abacate" made with avocados, rum and sugar cane. In Mexico and other Latin American countries, there's rompope, an eggnog-like drink cited as being created in the 17th century by nuns at the Santa Clara Convent in Puebla, Mexico.

It isn't a (far) stretch to include Italian zabaglione and French sabayon in this group, although these are generally thought of as desserts and not drinks.

Americans tend to reserve eggnog for the winter holidays, but in many places these drinks are consumed year-round with slight adjustments based on the season. Drinking custard, for example, is essentially the same as eggnog but without the warming spices of nutmeg and cinnamon.

Nutmeg (like cilantro) can evoke a strong response — people either love it or hate it — and adding too much can ruin a recipe for everyone. If you're in the hate camp, consider substituting cinnamon and/or cardamom for the nutmeg in the following recipes. A little clove is nice, too.

Although alcohol is optional, varying the type used is a great way to tweak the flavor.

Whisky, bourbon, rum (gold, dark or spiced), brandy and sherry are popular options. Our favorite nogs often include a mixture of bourbon, rum and brandy in equal parts.

Some of the following recipes contain uncooked or lightly cooked eggs, which sometimes contain salmonella bacteria, which can cause serious illness. We've included cooking instructions or alternatives whenever possible.

Many of the following recipes use whole eggs; others use just the yolks. In today's Front Burner, you'll find a recipe for using all those egg whites. 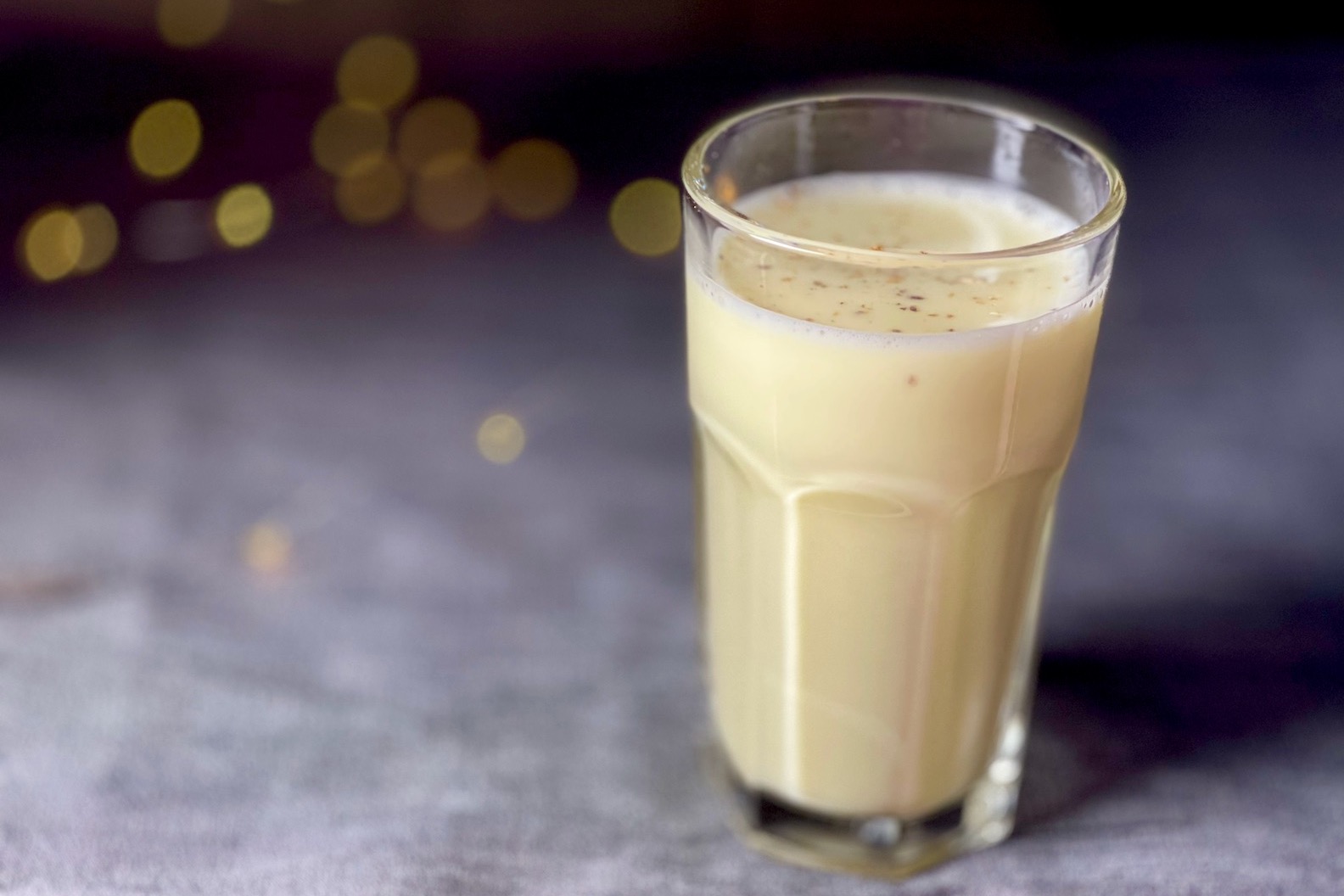 Classic Eggnog served dusted with ground cardamom (Arkansas Democrat-Gazette/Kelly Brant)  With a full dozen yolks and a pint of heavy cream, this nog is ultra rich and creamy.

In a large saucepan over medium heat, stirring constantly, cook the milk, cream and nutmeg, cardamom or cinnamon until mixture is steaming or a thermometer registers 150 degrees. Reduce heat to low.

In a large bowl, whisk together the egg yolks and sugar. The mixture will be somewhat coarse and grainy at first; keep whisking until it smooths out. Gradually whisk the hot milk into the egg yolks. Return mixture to saucepan and continue cooking, whisking frequently, until mixture reaches 160 degrees. Remove from heat and let cool for 30 minutes. Transfer to a pitcher and refrigerate until well chilled, 3 to 24 hours.

To serve, pour a small amount of whiskey in each glass, if desired, and top with eggnog. Garnish with a light sprinkle of nutmeg, cardamom or cinnamon.

Recipe adapted from "Southern Living Christmas All Through the South" 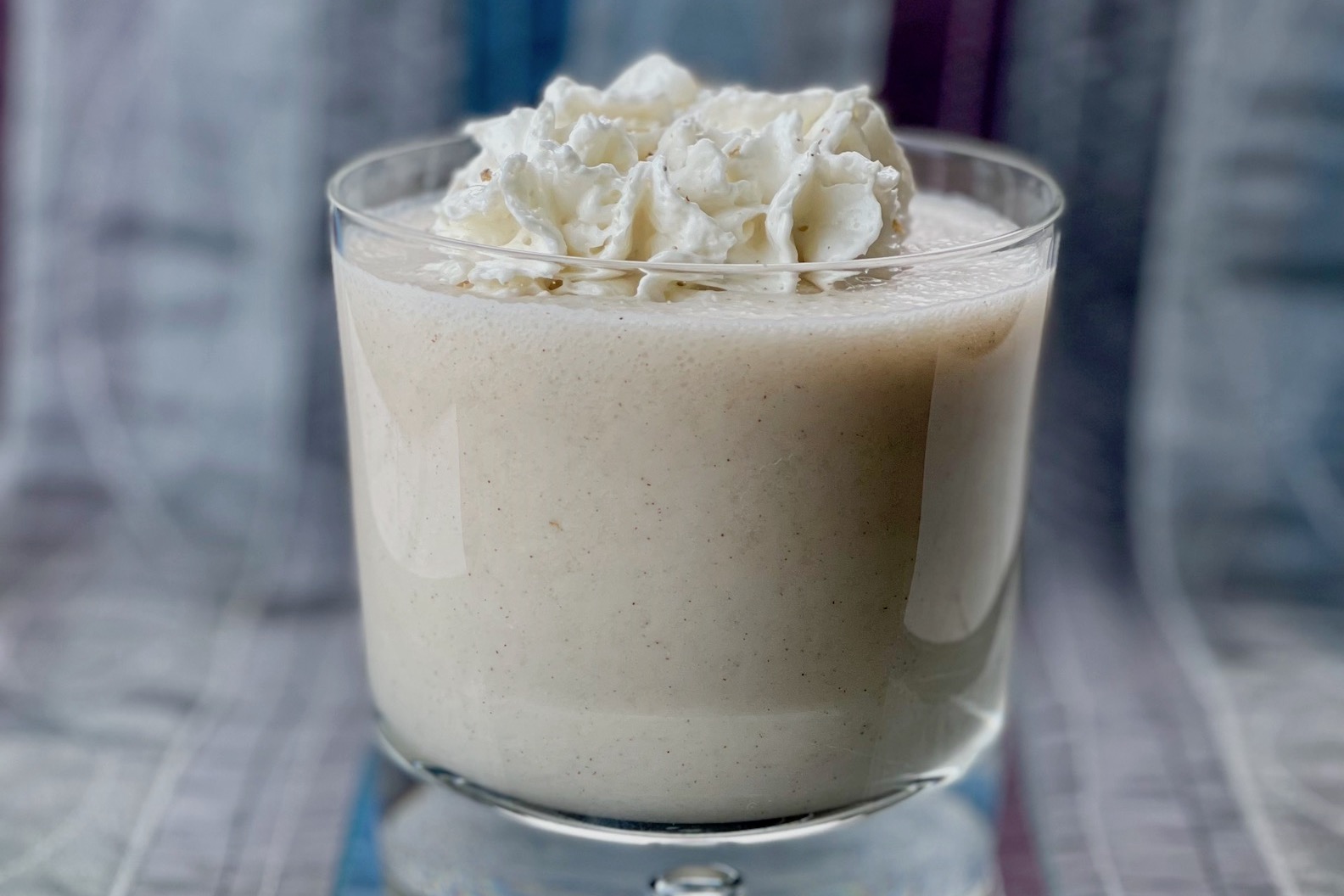 No-Egg Nog is rich and creamy from almond and coconut milks. (Arkansas Democrat-Gazette/Kelly Brant)  We were tempted to call this recipe veggnog (because it's vegan — get it?).

Blend on high until creamy and smooth. Then taste and adjust sweetness and spices as needed. Stir in bourbon. Chill until ready to serve. Stir well before serving. Serve garnished with whipped cream, if desired. 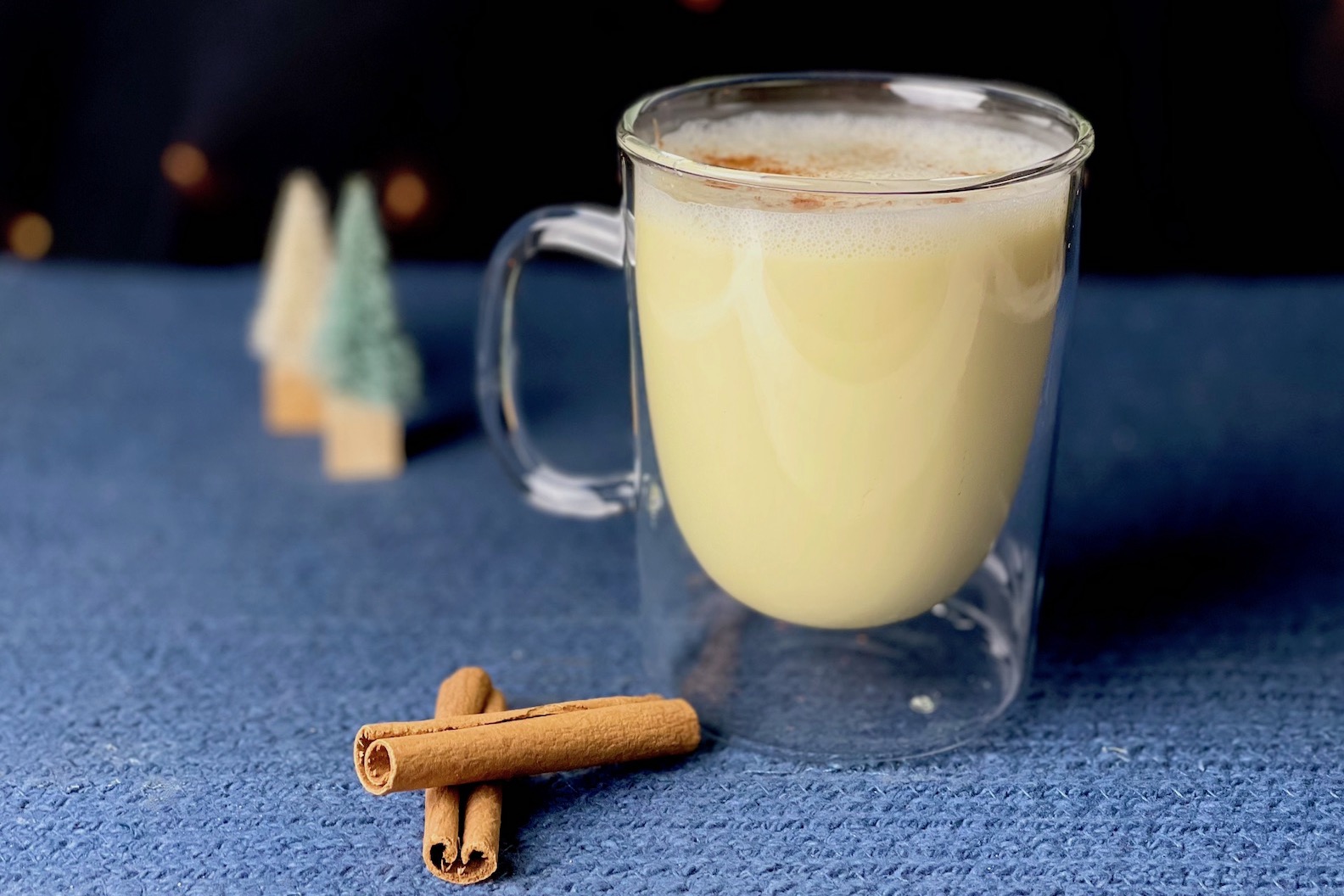 Rompope can be served warm or chilled. (Arkansas Democrat-Gazette/Kelly Brant)  This eggnog-like drink is popular in Mexico and other Latin American countries. It is pronounced rahm-poe-pay. This version is made with almonds, but pecans, pistachios and pine nuts are also common.

In a large saucepan, combine milk, sugar, cinnamon stick, clove and ground nutmeg. Whisking frequently, cook over medium-low heat until mixture is steaming, but not boiling. Remove from heat.

Remove and discard the cinnamon stick and clove from the sweetened milk. If necessary, pass the mixture through a fine-mesh sieve to remove any pieces of clove or cinnamon stick.

In a blender or food processor, puree the almonds and their soaking liquid until completely smooth.

In a medium bowl, whisk the egg yolks with the vanilla.

Return the saucepan to medium-low heat and add the pureed almond mixture.

Heat the milk to about 160 degrees — it should be quite hot and steaming, but without bubbles breaking the surface.

Stir in rum, if using.

Serve warm or let cool at room temperature for 1 hour and then chill until ready to serve.

Serve garnished with a sprinkle of cinnamon, if desired.

Note: To blanch whole almonds, bring a small saucepan of water to a boil. Add almonds and boil for 1 minute. Drain and rinse with cold water. When almonds are cool enough to handle, slip off skins.

[Video not showing above? Click here to watch: arkansasonline.com/1222eggnog]

In a large saucepan, over medium heat, heat milk, stirring occasionally, just until bubbles start to break on the surface.

Meanwhile, in a large bowl, beat eggs, sugar, cinnamon and vanilla until mixture is thick and pale yellow. Remove milk from heat. Slowly whisk 1 cup of the hot milk into egg mixture. Beat in remaining milk, 1 cup at a time. Transfer milk-egg mixture to saucepan in which milk was heated. Stirring constantly, heat mixture to 160 degrees over low heat. Remove from heat and let cool.

Once cool, stir in the alcohol. Cover and chill at least 4 hours. Stir well before serving. Float the whipped cream on top, making sure a little of it slips in each glass as you pour.

Will keep refrigerated for up to 3 days. 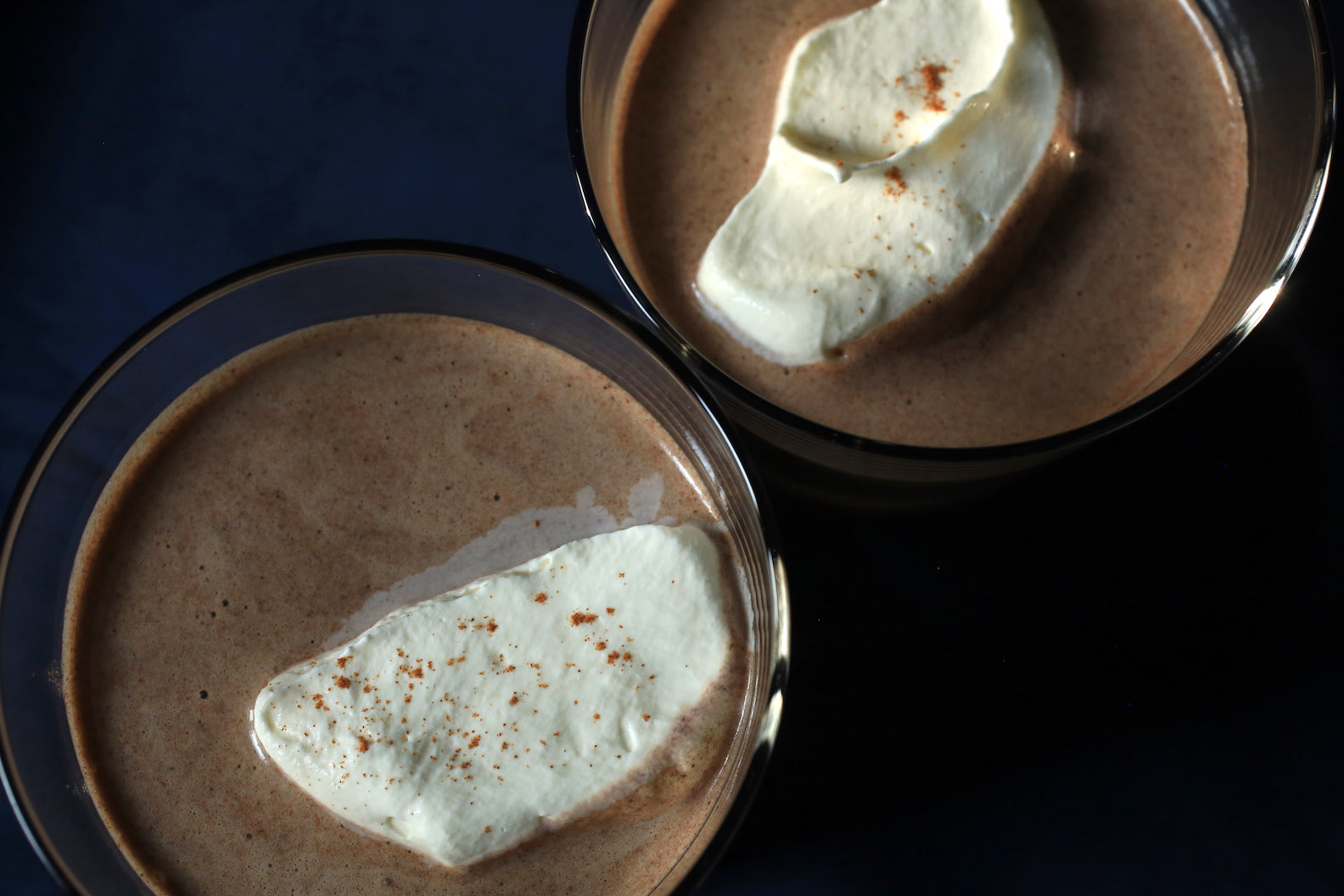 Spiced Chocolate Eggnog (Democrat-Gazette file photo)  This drink combines two seasonal favorites: hot chocolate (well, in this case it's cold) and eggnog. It is delicious with or without the alcohol.

In a large saucepan, heat the milk, sugar, salt, vanilla seeds and pod, and chopped chocolate over medium-high heat, stirring until sugar dissolves, chocolate melts and the mixture is hot, but not scalded. Remove from heat. Let stand 30 minutes.

Whisk yolks in a medium bowl until pale, about 2 minutes. Whisk 1 cup of the hot milk mixture into yolks in a slow, steady stream. Then whisk the yolk mixture into remaining milk mixture. Cook over medium-high heat, stirring constantly, until mixture reaches 160 degrees, about 4 minutes. Do not let mixture boil.

Remove pot from heat and discard vanilla pod. Pour mixture into a large pitcher or punch bowl and refrigerate until chilled.

To serve: Whip cream to soft peaks. Add the rum (if using) to the eggnog, then top each serving with a dollop of whipped cream sprinkled with cinnamon or nutmeg.

Notes: If you plan to serve this without alcohol, use less sugar. The egg whites can be frozen for later use. 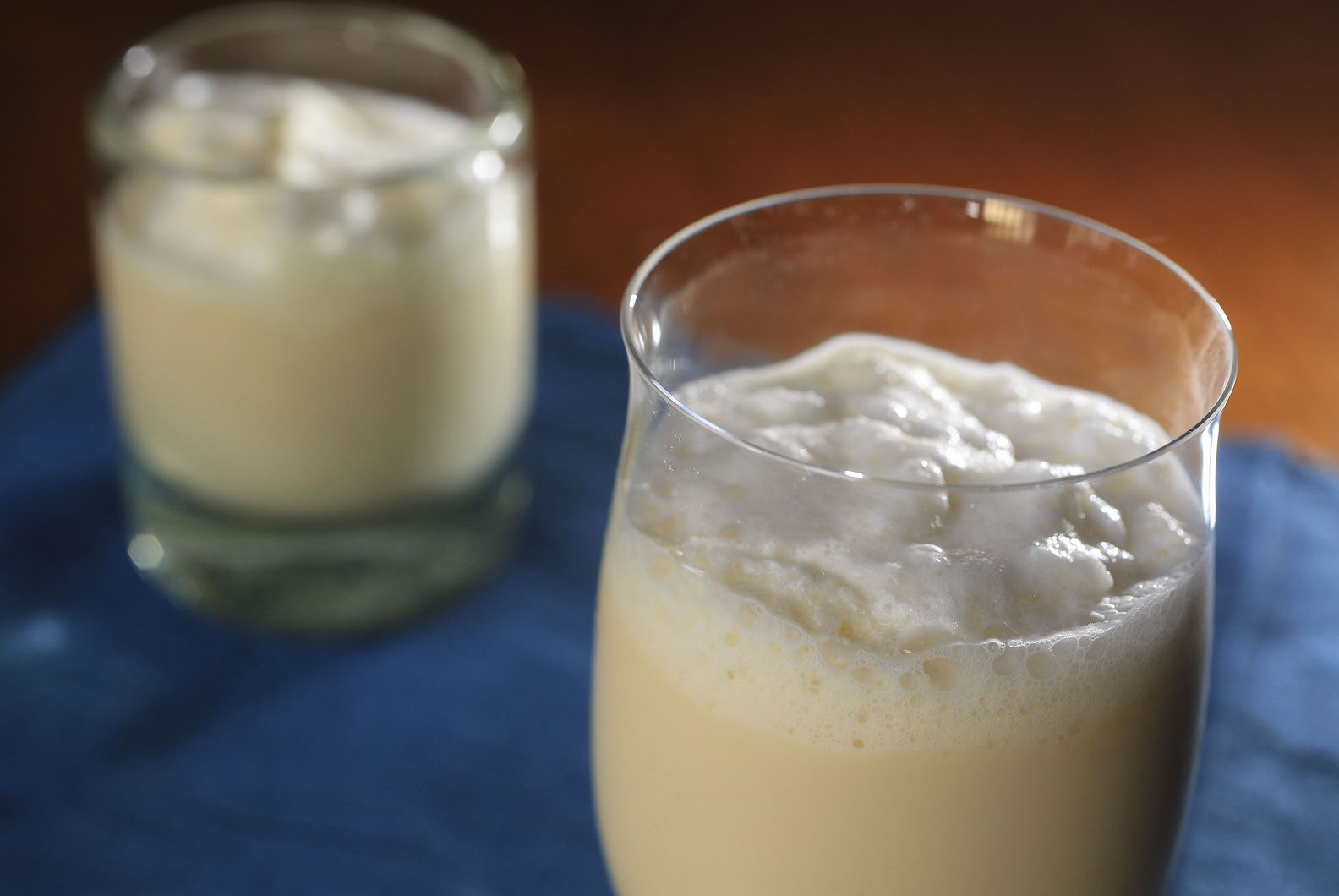 Combine the heavy cream and milk in a spouted bowl or measuring cup; set aside.

In a large heavy-bottomed saucepan, combine ½ cup water and 1 cup of the granulated sugar over medium-high heat. Cook, swirling (not stirring) the pan occasionally, until sugar turns dark amber. Reduce heat to medium and carefully add the cream-milk mixture — it will sputter and bubble vigorously — whisking constantly until mixture is smooth and creamy. Remove from heat and set aside.

In a large bowl, whisk together the egg yolks, brown sugar and vanilla until thickened. Whisking constantly, add ½ cup at a time of hot caramel mixture to the egg yolks, whisking until well incorporated. Pour the whiskey or rum into a pitcher or punch bowl, then add the egg yolk mixture, whisking to mix well; set aside.

In a separate bowl, whip egg whites (or 1 cup heavy cream) with an electric mixer on medium speed to soft peaks, about 2 minutes. Gradually add the remaining granulated sugar and continue whipping until firm, glossy peaks form, 1 to 2 minutes more.

Fold the egg whites (or whipped cream) into the egg yolk mixture. Serve immediately, or cool to room temperature and refrigerate until well chilled.

Note: The egg whites in this recipe are uncooked. If desired, 1 cup whipped heavy cream can be substituted for the egg whites.