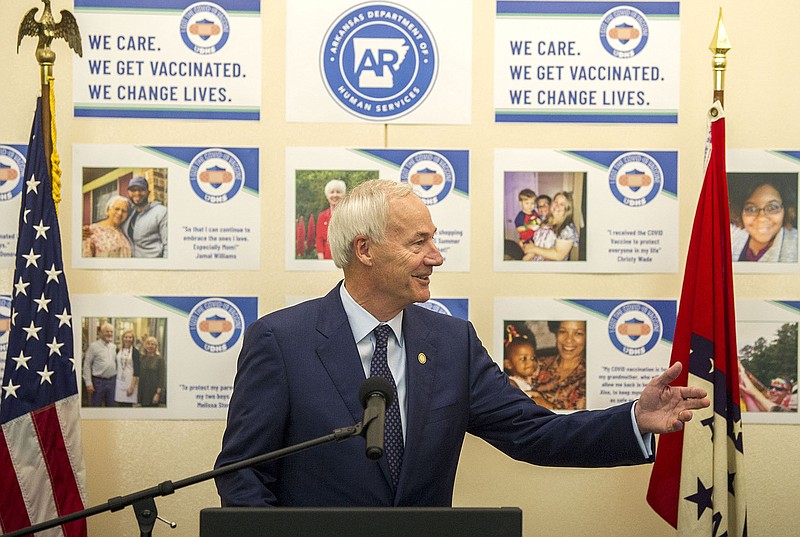 The federal government Tuesday approved a request from Gov. Asa Hutchinson's administration for a waiver to retool Arkansas' version of Medicaid expansion.

The retooled program will be called the Arkansas Health and Opportunity for Me program, or ARHOME, starting Jan. 1 and ending Dec. 31, 2026, under the waiver approved by the U.S. Centers for Medicare and Medicaid Services.

"This comes at just the right time, so that 300,000 Arkansans can be confident of continued health care coverage as we go into the new year," Hutchinson said Tuesday.

"It is good news for this time of the year," the Republican governor said at his weekly news conference at the state Capitol.

Hutchinson said ARHOME will place greater emphasis on improving health outcomes of participants and that insurance carriers will be accountable for meeting health improvement targets.

Bo Ryall, president and CEO of the Arkansas Hospital Association, said in a statement, "We are pleased to see the new waiver approved by CMS [Centers for Medicare and Medicaid Services] and look forward to the continued health care coverage of those enrolled in the AR Home program."

The state's Medicaid expansion program enrollment totaled 330,421 on Nov. 1, according to the latest figures on the state Department of Human Services' website.

The federal government will continue to pay 90% of the cost of the program and the state will pay 10%.

During the regular legislative session this year, a spokeswoman said the department had projected the Arkansas Works budget at $2.18 billion in fiscal 2022, which started July 1.

The federal government's share was $1.96 billion and the state's was $218 million.

The Department of Human Services submitted the state's application for a waiver to the Centers for Medicare and Medicaid Services in July.

"The approval will allow us to move forward on most of our proposed reforms of the program," Department of Human Services spokesman Gavin Lesnick said.

Approval of the waiver request will allow the state to help people purchase coverage from qualified health plans offered through the federally facilitated marketplace, Centers for Medicare Administrator Chiquita Brooks-LaSure said in a letter dated Tuesday to Dawn Stehle, deputy director for health and Medicaid at the state Department of Human Services.

The agency approved a 5.8% annual trend rate for the per-member, per-month budget neutrality limit, which was higher than the state department's request, and provides the state with additional financial protection to deal with the uncertainties of covid-19, the eventual end of the public health emergency and lower beneficiary premiums, according to the Human Services Department.

In addition, the state will have a waiver of retroactive eligibility, allowing it to limit retroactive coverage to 30 days before an application rather than the 90 days required under the Medicaid statute, Brooks-LaSure said.

Hutchinson said the Centers for Medicare and Medicaid Services did not approve the state's request to continue requiring individuals with income above 100% of the federal poverty level to pay a share of the premiums for their coverage.

"Based on discussions with the Administration, this was not unexpected," the governor said in a news release afterward. The current premium amount of $13 per month will continue for calendar year 2022 but not beyond, he said.

The federal government will provide Arkansas authority through Dec. 31, 2022, to allow the state to charge monthly premiums of up to 2% of household income for beneficiaries above 100% of the federal poverty level, Brooks-LaSure said. Premiums and cost-sharing will be subject to an aggregate cap of 5% of family monthly or quarterly income, she said.

Co-payment and coinsurance amounts will be consistent with federal requirements regarding Medicaid cost-sharing and with the state's approved plan, she said.

The Centers for Medicare and Medicaid Services has concluded that approval of Arkansas' application "is likely to support the state in its continued Medicaid expansion efforts," Brooks-LaSure wrote.

"Accordingly, we have determined ARHOME as approved is likely to advance the objectives of Medicaid. The state will comprehensively monitor and evaluate the effectiveness of each ARHOME demonstration component per expectations detailed in the special terms and conditions and as outlined."

The ARHOME demonstration application includes more components still under review by the Centers for Medicare and Medicaid Services, Brooks-LaSure said.

"CMS will continue to work on these items, with the state, including state efforts to address social determinants of health and health equity through the proposed Life360 Homes," she said.

Life360 Homes are aimed at assisting women with high-risk pregnancies, helping people with mental illnesses gain access to services in rural counties and giving people most at risk of long-term poverty a helping hand, according to the Human Services Department.

"We are assured that that's going to happen," Hutchinson said. "We just have to get the financing part of it worked out, and so we are anxious for that."

Dennis Smith, senior adviser for Medicaid and health care reform at Human Services, said, "The issue is on how to cost out the Life360 Homes, how many will there be, and how do they get counted in the per-member, per-month cost towards budget neutrality.

"We've had great discussions with CMS," he said. "We just couldn't push it all the way through by the end of the year. ... They are very much interested in the concept and in the target populations, and so we are confident that we will get the Life360 Homes."

Under ARHOME, state officials have said, Human Services plans to implement an inactive status, starting in 2023, for people in the program who don't do things such as attend school, work, select a health insurance plan or use their health insurance in any way. Those people will be moved to fee-for-service Medicaid until they become active, according to department officials.

Human Services spokeswoman Amy Webb said Tuesday, "This has not been decided."

Federal officials have indicated "we need to go through the state rule-making process and then request to amend the waiver," she said.

"ARHOME was a joint effort by the Legislature and Executive Branch to achieve improved healthcare and life outcomes for the recipients, greater accountability for the taxpayer's dollars, and the ability to make a difference in people's lives so they can move up the economic ladder and become independent, thriving Arkansans," she said in a statement.

"This is truly a focused effort on improving the lives of Arkansans, especially young expecting mothers, our veterans, our youth and our rural citizens through LIFE360Homes," Irvin said.

But Sen. Trent Garner, R-El Dorado, who has been a critic of the Medicaid expansion program, said Tuesday, "Anytime Joe Biden's radical CMS approves your healthcare program, you know you are on the wrong track.

"Joe Biden is thrilled that Arkansas is expanding his government-run, socialist healthcare," Garner said in a written statement. "Unfortunately, the people of Arkansas will suffer."

The state's Medicaid expansion was initially authorized by the 2013 Republican-controlled General Assembly and then-Gov. Mike Beebe, a Democrat, as the private option with a sunset of Dec. 31, 2016.

The private option was replaced by the current Medicaid expansion version, which was authorized under the Arkansas Works Act of 2016 and expires Dec. 31.

The work requirement has not been enforced since a federal judge ruled in March 2019 that federal law didn't allow then-President Donald Trump's administration to authorize that requirement in Arkansas.

"Based on the litigation and based on what the Biden administration put out in guidance, we did not formally request a work requirement," Smith said. "If it is allowable in the future, then you would have to submit an amendment to the waiver" to the federal government.