Meeting of the minds: UA basketball players talk it out, roll in ‘best game’ 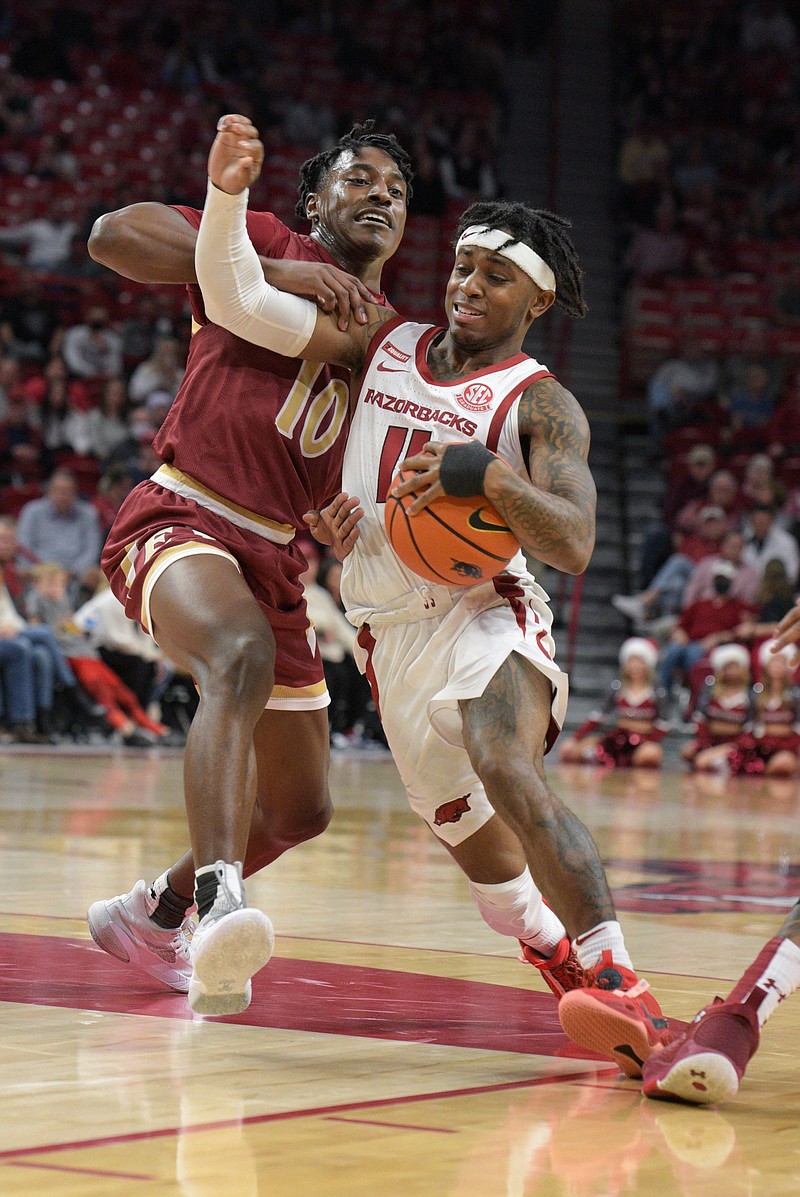 Chris Lykes (11) of Arkansas drives on Tuesday, Dec. 21, 2021, against Kris Wooten (10) of Elon during the second half of the Razorbacks? 81-55 win at Bud Walton Arena in Fayetteville. Visit nwaonline.com/211222Daily/ for today's photo gallery..(NWA Democrat-Gazette/Hank Layton)

FAYETTEVILLE -- In the wake of suffering back-to-back losses to Oklahoma and Hofstra, the Arkansas Razorbacks held a players-only meeting.

Sophomore guard Davonte "Devo" Davis called the meeting, which was held on Sunday in the locker room at the team's practice facility.

"Devo sent a text and we all met up," junior forward Kamani Johnson said. "Everybody talked. I mean, we're grown men, so everybody put their input in.

"We kind of got some stuff squared away. What we needed. It showed."

The Razorbacks showed up Tuesday night and beat Elon 81-55 at Walton Arena.

Lykes, who led the Razorbacks (10-2) with 21 points, has been the team's sixth man, but Wade, Robinson and Johnson got their first extended minutes off the bench.

"We had some guys that hadn't had an opportunity to play a lot, and they were hungry," Musselman said. "Some of the other guys who have had a lot of opportunity need to play with more energy because you cannot win in the SEC unless you have toughness and you play with great energy and you have a competitive will to win.

"You can't win in this league unless you possess all those qualities."

Johnson, a transfer from the University of Arkansas at Little Rock who had played 30 minutes in six games, had 15 points, 7 rebounds and 3 blocked shots in 16 minutes. He hit 7 of 11 shots and 9 of 13 free throws.

Robinson, a sophomore transfer from Texas A&M who had played 54 minutes in six games, had a career-high 14 points in 20 minutes. He hit 3 of 6 three-pointers.

Wade, a transfer from Wichita State who had played 77 minutes the first 11 games, had 7 points, 5 rebounds and 3 blocked shots in 21 minutes.

"A lot of effort, a lot of energy with those guys," Musselman said. "A lot of competitiveness."

The Razorbacks hit 6 of their 7 shots and the Phoenix missed their last 8 shots and had 3 turnovers.

Robinson hit a pair of three-point baskets to help fuel the run and Lykes had four points.

"Man, it was just playing together," Wade said. "Playing hard."

The Razorbacks pushed their lead 30 points, 68-38, with 7:08 left on two free throws by Jaylin Williams.

"We knew we were going to get their best punch," Elon Coach Mike Schrage said. "This is a proud program and I have a lot of respect for Coach Musselman and what he has built here.

"I know the history of Nolan Richardson and all those guys.

"You lose two in a row to two really good teams, so we knew they would come out ready."

The Phoenix, led by sophomore forward Michael Graham's 14 points and six rebounds, jumped out to a 26-21 lead.

"I thought we did really well in the first two rounds, which is what we call the first two segments that are really important to us," Schrage said. "We were really good, but they changed up the defense on us. They started switching more and got us stagnant and that was where we really stalled out offensively. That is to their credit."

Senior guard JD Notae, back in the starting lineup after coming off the bench against Hofstra, had 15 points, 6 rebounds and 2 assists for Arkansas.

Davis, who played off the bench for the first time this season, didn't attempt a shot and hit 1 of 2 free throws, but had 6 assists and 6 rebounds in 35 minutes.

"I thought he was phenomenal," Musselman said. "We played him all over.

Musselman said he approved of the players meeting without the coaches.

"I think the one thing that our team has lacked this year is internal leadership," Musselman said. "The coaching staff are leaders, but great teams are player-led.

"And the last two days I think we've taken a step in the right direction. We'll continue to do that as well."

Print Headline: Meeting of the minds