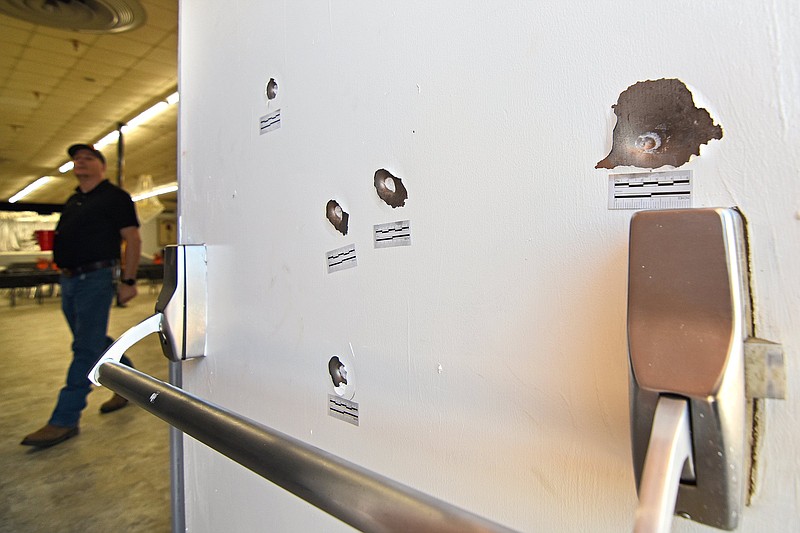 Chief Rabban JT Brown walks past a door that was left with multiple bullet holes after a shooting early Oct. 17, 2021, at Sahara Temple in Pine Bluff. (Arkansas Democrat-Gazette/Staci Vandagriff)

Prosecutors cleared a Pine Bluff police officer of wrongdoing after an investigation into his Oct. 17 shooting of a security guard at a party celebrating the University of Arkansas at Pine Bluff's homecoming at the Sahara Temple, 820 S. Main St.

In a letter addressed to interim Police Chief Lloyd Franklin Sr., Jefferson County Prosecuting Attorney Kyle Hunter wrote that officer Ti Kelly "was justified under Arkansas law in using deadly force" in the shooting, which was investigated by the Arkansas State Police. Deputy Prosecuting Attorney Will Jones confirmed that Hunter sent the letter.

According to Hunter's letter, Kelly was in the parking lot of the main office of the Pine Bluff Police Department at 200 E. Eighth Ave. when he heard shots fired at the Sahara Temple, a venue owned by the local Shriners organization and used for parties and other large gatherings. Kelly drove his patrol vehicle to the location of the party, about a block away, and approached the building as shots were still being fired inside the building.

"Officer Kelly observed a male, later identified as Keyyontae Vignaude, backing out of the building firing a handgun with a green laser into the building," Hunter wrote. "Officer Kelly fired four rounds at Vignaude, which struck him causing Vignaude to fall to the ground. Officer Kelly approached Vignaude, secured Vignaude's .40-caliber Glock that fell from his hand and an extended magazine that went with the Glock, and began rendering aid."

Vignaude was transported to Jefferson Regional Medical Center by ambulance and then was transferred to a Little Rock hospital for treatment. He was treated and released.

Another person named Anthony Everett received minor injuries from bullets "believed to have passed through Vignaude, struck the front wall of the building and hit Everett," Hunter wrote.

Vignaude, whom state police identified as a UAPB student from Hanover Park, Ill., and Everett were hired as security officers for the party but were "not wearing clothing or anything that designated them as security," Hunter wrote.

The letter does not make a connection between Anthony Everett and a Duane A. Everett, 24, of Eudora, who state police identified as a person injured by gunfire while at the party. Authorities initially mistakenly identified Duane A. Everett as the gunman seen by the officer.

The potential motive for Vignaude opening fire remains unclear. Franklin did not offer further details into the incident.

It is also unclear who killed Marquarius Williams, 21, who was identified by his grandfather as the person who was shot to death inside the building that night. Hunter said Kelly did not shoot Williams, who arrived at the hospital in a private vehicle.

"In conclusion, Officer Kelly was reasonable in believing that deadly physical force was necessary to protect the people inside the Sahara Temple building from the use of deadly physical force by Keyyontae Vignaude," Hunter wrote. "Therefore, Officer Kelly was justified in shooting Keyyontae Vignaude to protect others at the party."

A second shooting that claimed the life of a man at University Drive and Pullen Street occurred more than 75 minutes after the Sahara Temple shooting. No suspect has been named, and the investigation is ongoing.