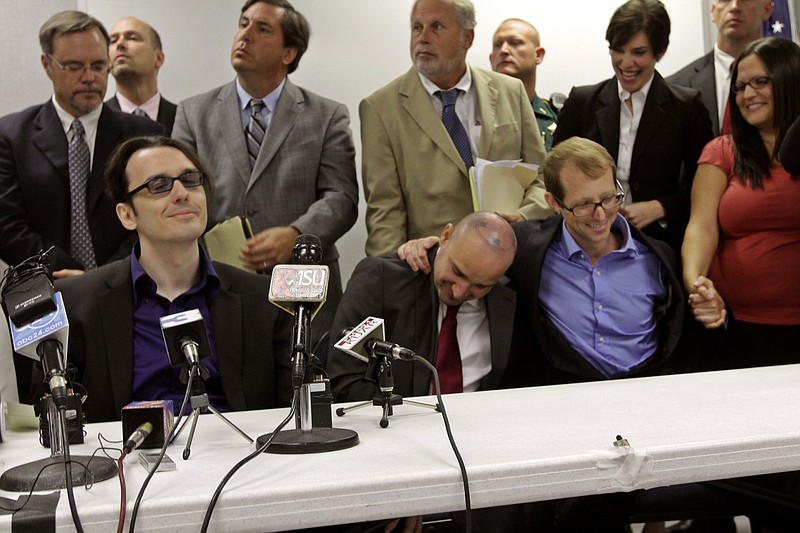 FILE — The West Memphis Three sit at a table during a news conference at the Craighead County Courthouse in Jonesboro after their release from prison in this Aug. 19, 2011, file photo. From left are Damien Echols, Jessie Misskelley Jr. and Jason Baldwin. The three had pleaded guilty to the 1993 deaths of three West Memphis children in exchange for an 18-year sentence plus time served, enabling their release from prison. (Arkansas Democrat-Gazette file photo)

An attorney for one of three men convicted in one of the most high profile murder cases in recent Arkansas history said he was granted access to evidence needed for new DNA testing as part of decades-long efforts to exonerate the West Memphis Three.

Patrick Benca, a Little Rock-based attorney for Damien Echols, who was convicted in 1994 for the brutal murders of three 8-year-old boys, said he combed through catalogues of evidence at the West Memphis Police Department Tuesday, locating several pieces of evidence from the crime that will be sent to an out-of-state lab for more forensic testing.

"Everyone was very cooperative," Benca told the Arkansas Democrat-Gazette Tuesday evening after reviewing the evidence. "There was not anyone in there [the West Memphis Police Department] who I felt did not want to find justice and find out who is really responsible."

Known as the West Memphis Three, Echols, Jason Baldwin and Jessie Misskelley spent years in prison for the killings of three boys whose bodies were found May 6, 1993, in a drainage ditch near West Memphis.

The victims -- Christopher Byers, Stevie Branch and Michael Moore -- were found naked and hogtied with shoelaces. Investigators thought the murders were connected to a Satanic ritual.

Since their convictions, the West Memphis Three maintained their innocence.

They spent nearly 20 years in prison until August 2011 when prosecutors allowed the men to walk free as part of a bargain known as an Alford Plea, which permitted Echols, Baldwin and Misskelley to maintain their innocence yet plead guilty in exchange for 18-year-sentences and credit for time served.

No DNA evidence ever linked them to the crime.

Since then, more advanced testing technologies have emerged, causing attorneys to seek access to evidence for further examination in hopes the men can be exonerated and the true perpetrator found.

Echols' attorneys began requesting access to the evidence more than a year ago only to learn of rumors that it might have been lost or destroyed by fire.

In his Dec. 7 resignation letter, Pope said he has "other endeavors and goals that are pointing me in a different direction."

Nick Coulter, communications director for the city of West Memphis, said the city planned to release news of the resignation on Dec. 24. Coulter said Pope's "resignation is completely unrelated to the current West Memphis Three rumor being circulated."

Benca said Michael Stephenson, the West Memphis city attorney, helped secure access to the evidence for review, notifying attorneys in recent weeks they could review what remained from the case.

Benca said it remains unclear why the West Memphis Police Department, along with other officials, previously communicated that evidence might not exist anymore.

"We have not gotten to the bottom of that particular issue as to why they believe some of the evidence was destroyed or lost," Benca said.

Ligatures used to hogtie the three boys were the crucial pieces of evidence Benca and an investigator who visited the West Memphis Police Department Tuesday hoped to find.

More advanced forensic testing may be able to find human tissue or other genetic material within the fabric of the ligatures, possibly resulting in a match that could reveal new suspects.

"I was very excited about finding the ligatures," Benca said. "It was something we were not sure we were going to find. I don't think anyone knew those were there."

Clothing found nearby the boys' bodies has also been secured for new testing as well as human hair found at the crime scene, he said.

Once documentation needed for the release of the evidence is completed, it will be sent to a private lab for testing, Benca said.

It is unclear how long the process will take, he said.