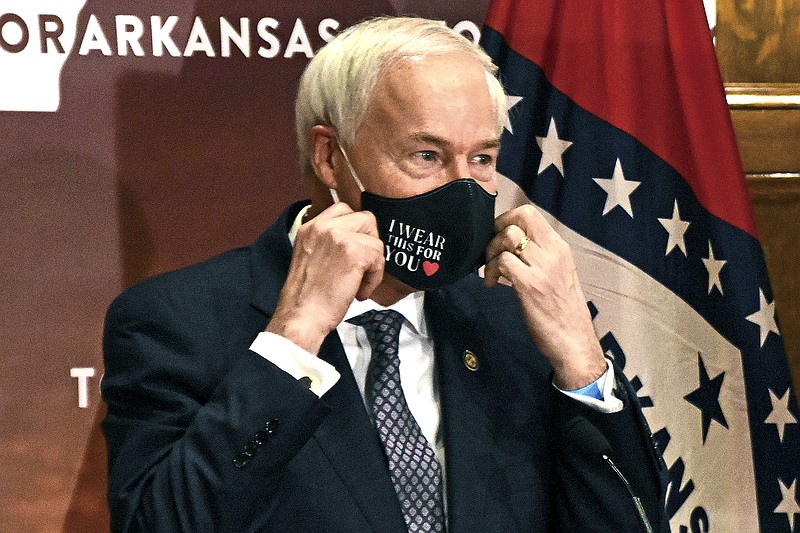 FILE - In this July 20, 2020 file photo, Arkansas Gov. Asa Hutchinson removes his mask before a briefing at the state capitol in Little Rock. Arkansas lawmakers on Wednesday, April 28, 2021, approved a reworked bill that aims to preempt federal gun restrictions following objections from the governor, law enforcement and prosecutors that a previous proposal went too far and jeopardized public safety. (Staci Vandagriff/The Arkansas Democrat-Gazette via AP, File)

Final arguments were due sent last week to a Pulaski County judge over the state’s law banning mask mandates by public entities, starting a countdown to a decision.

Back up: What does the law say specifically?

Government entities covered by the law include the Arkansas National Guard, local school districts, public higher education institutions and cities, among others.

The law does not apply to private businesses.

Who filed the lawsuit?

An alliance of parents, educators and Pulaski County authorities, with the endorsement of Gov. Asa Hutchinson, sued to overturn the law.

Enforcement of the law has been on hold since August when Pulaski County Circuit Judge Tim Fox issued an injunction, pending resolution of the lawsuit challenging the mask-mandate ban.

What do those opposed to the law argue?

The plaintiffs have argued the law:

• Infringes on the governor's authority over the National Guard

• Restricts the power of county officials to safely operate their facilities

What does the state say in defense?

Sovereign immunity, the state's constitutional protection against lawsuits, can only be overcome if the plaintiffs can show that lawmakers exceeded their authority or acted illegally, but the state argues the plaintiffs cannot prove that.

Pulaski County Circuit Judge Tim Fox heard testimony during a one-day trial on the issue last month and final arguments were due in writing last week.

The filings start a countdown for Fox to make a final ruling, which is expected to be appealed to the Arkansas Supreme Court no matter what decision he makes.

Read more on the lawsuit from reporter John Lynch.