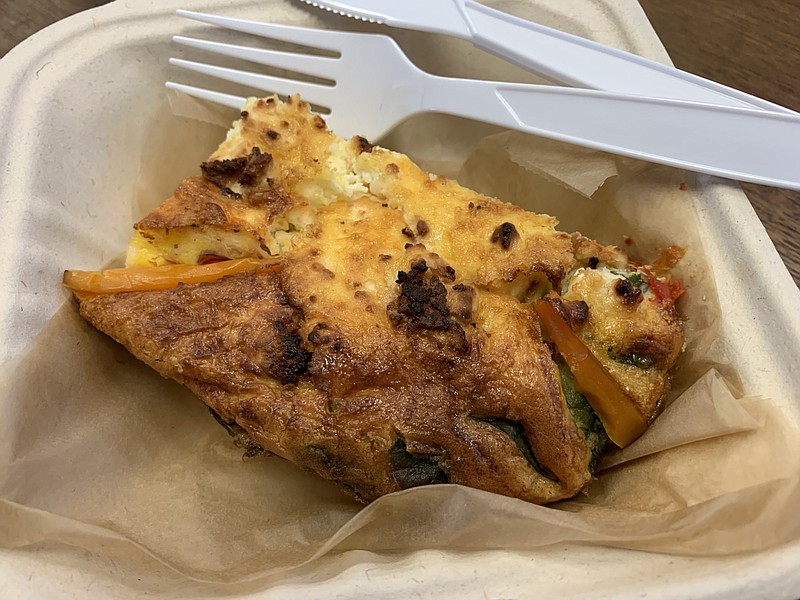 Our Veggie Frittata at Nexus Coffee & Creative in the River Market District was eggy and studded with vegetables. (Arkansas Democrat-Gazette/Eric E. Harrison)

The return of our Takeout Tastings column — you can call it a revival if you like — is really more the product of our frantically busy schedule than the recent resurgence of covid-19 and its manifold mutations, the original spread of which was its primary inspiration and impetus.

But we suspect the latter cause will be at least partially the reason for more such columns in the future.

And yes, two of the three places we’re covering this week have shown up in previous columns (we have actively tried to avoid repeats but we never vowed we wouldn’t, and the available pool of un-covered places, while not yet exhausted, has shrunk considerably). But we consider the stuff we took out from them noteworthy in and of themselves.

As has been our custom and ground rules, these are locally owned establishments, within a slightly flexible 15-minute radius so the food will still be hot when we get it to our table, and we pay for all our meals up front. Caveat: The prices on some items we describe may have changed.

WHAT WE GOT: Pierogies and Crawfish ($13)

This is one of B&B’s “Start Strong” items, and it’s probably not something we would ordinarily have ordered. But faced with the menu choices at the hour at which we visited (after 10 p.m.), we were looking for something not too heavy. That meant that, among other possibilities, we regretfully passed on the restaurant’s authentic Philly cheesesteak, which we have enjoyed in the past, and all of the three steamed mussels options. And some of the other quasi-appetizers, which we might have considered earlier in the evening, were just too potentially risky to our stomach (e.g., the duck wings, the scallop sliders, the Crispy Bleu Chips) or too peculiar (i.e., the Tuna & Tentacle, panko-crusted Ahi tuna paired with flash-fried Redneck Lipstick BBQ octopus tentacle served with jasmine rice and pickled ginger).

So, to make a long menu short, we went with this, and were delighted with it: flat house-made potato-filled dumplings, topped with a crawfish cream sauce, roasted corn relish and fried tarragon leaves. The dumplings were firm and tasty, and there were plenty of crawfish chunks in the highly complementary cream sauce. What we missed: some bread or something to mop up the remainder. It was a bit sloppy, and didn’t look like much in the plastic to-go container, so we didn’t get a photo.

HOW IT WENT: We placed our to-go order at the bar and it came out of the kitchen in about 12 minutes.

HOW IT’S GOING: There were a few customers at the bar and at tables. Not bad for a late hour on a weeknight. 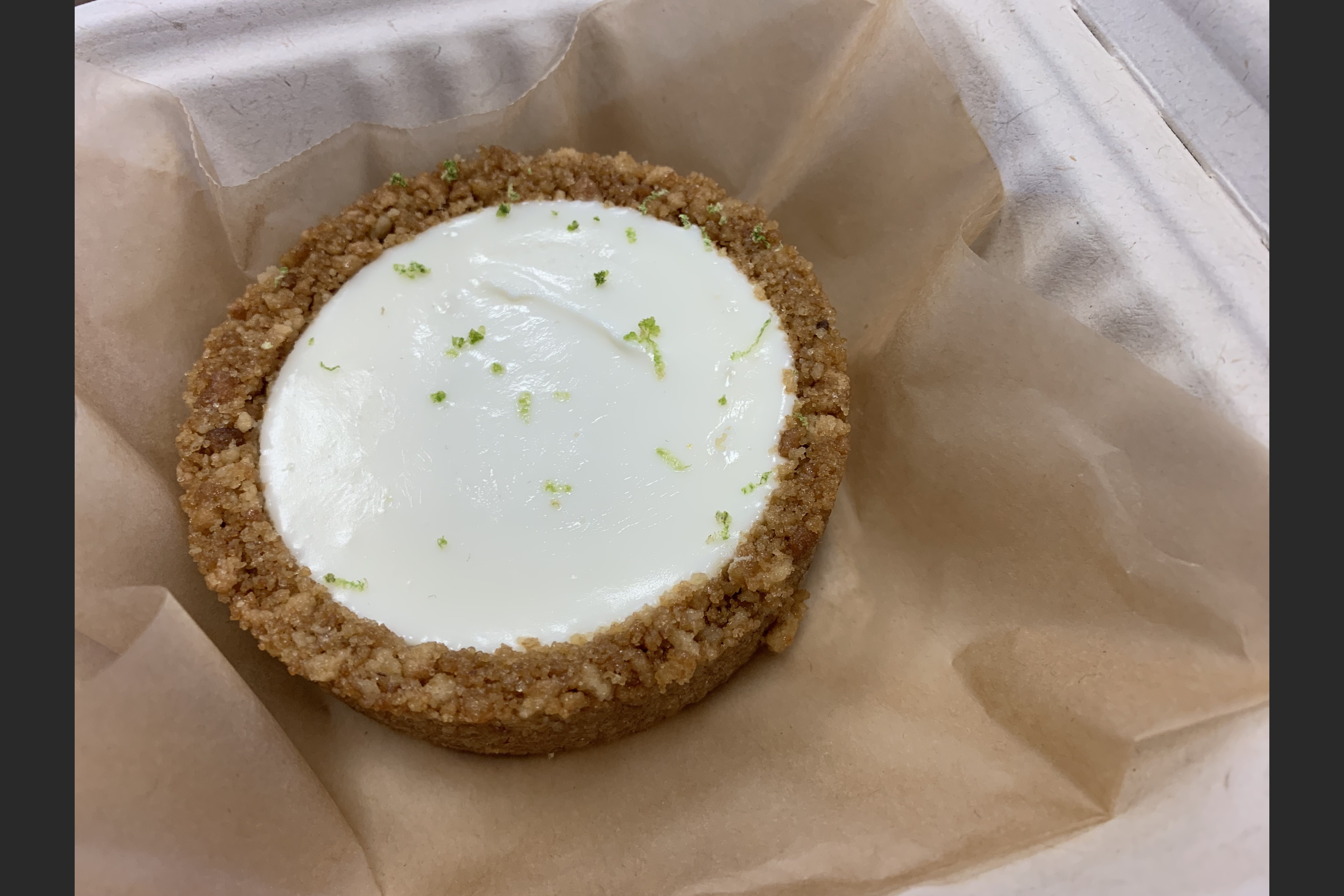 Nexus is primarily a coffee shop but with a range of small-portion pastries and minor menu items for the sake of hungrier customers. We got a slice of Veggie Frittata, a fluffy egg-based concoction studded with bits of veggies that included red bell pepper and broccoli. We’d recommend accepting the offer to warm it up, even if that takes place in a microwave, but it tasted pretty good even cold. The small round key lime cheesecake, on a graham cracker crust, is one of a group of baked goods by Nona, who bakes them on the premises so you know they’re fresh, and this was absolutely delicious, just lime-y enough for accent but also not too sweet.

Oh, and Nexus’ to-go packaging is all either recyclable or compostable, or both.

HOW IT WENT: We walked in, placed our order, and walked out in about four minutes, and it wouldn’t have taken even that long if we didn’t know and stopped to chat with the barista.

HOW IT’S GOING: The shop is usually busy but not overwhelmingly so at meal times. 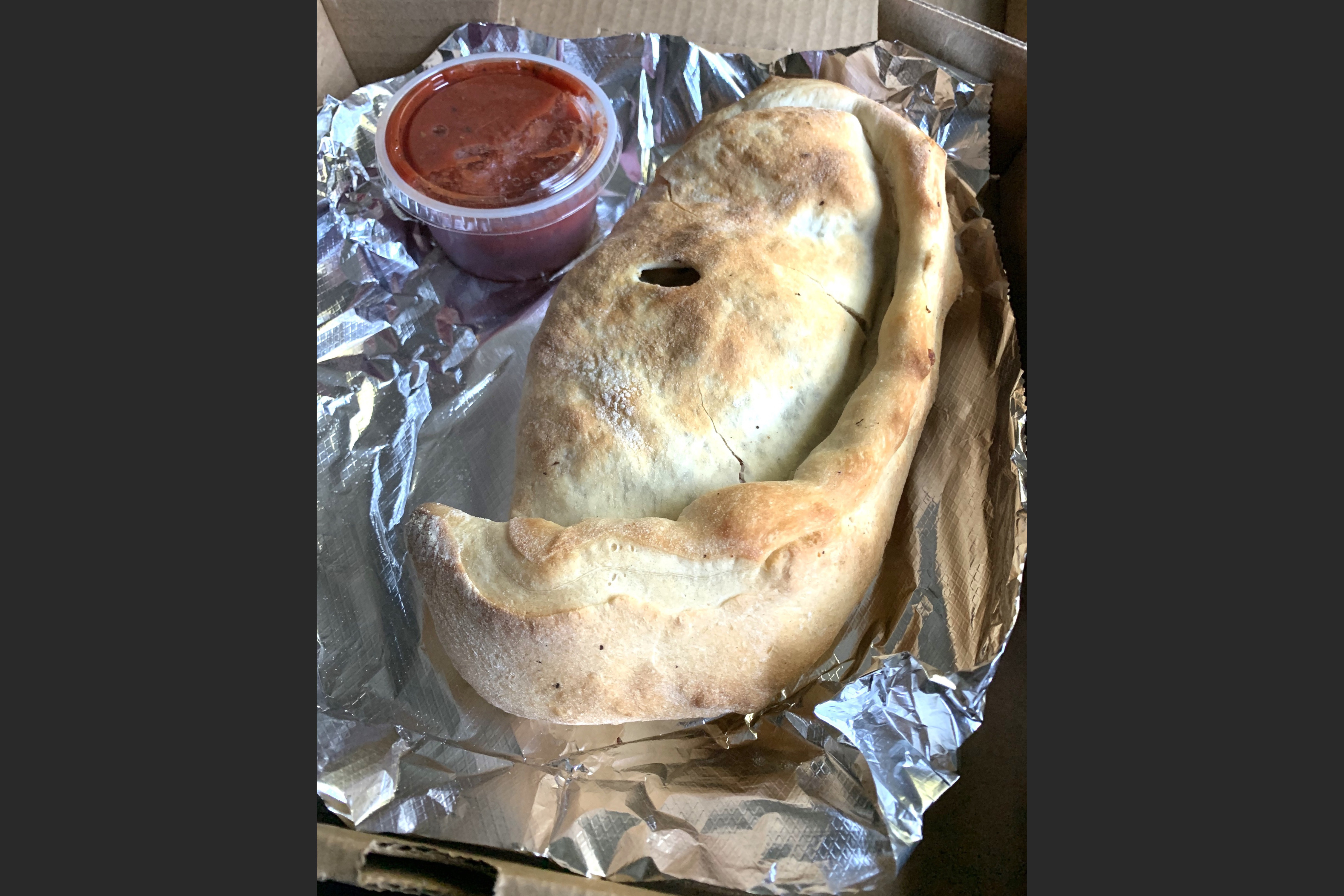 Vino’s principal menu item is its excellent pizza, but they also produce a big, honking calzone with cheese, sausage, pepperoni and/or mushrooms — though, we suspect, you can probably get it stuffed with any or all of the items they put on their pies. The calzone is roughly half-moon shaped, with a firm, chewy crust at the points and a slightly gooey mix of ricotta and mozzarella cheeses, with a generous amount in this case of chopped pepperoni slices and chopped mushroom pieces. A cup of their chilled pizza sauce is just enough to cover the exterior; dusting that with grated parmesan adds a flavor dimension. The calzone is big enough to feed two or, if you’ve got a big appetite but not big enough to handle one of Vino’s 14-inch pizzas, one.

HOW IT WENT: We hit Vino’s at just the right moment — no line at the register, so we got our order in right away; a calzone takes about 15 minutes to go into and come out of the oven.

HOW IT’S GOING: The place was lightly populated late on a Sunday evening; at peak periods the place packs out and the line to order can go out the door.