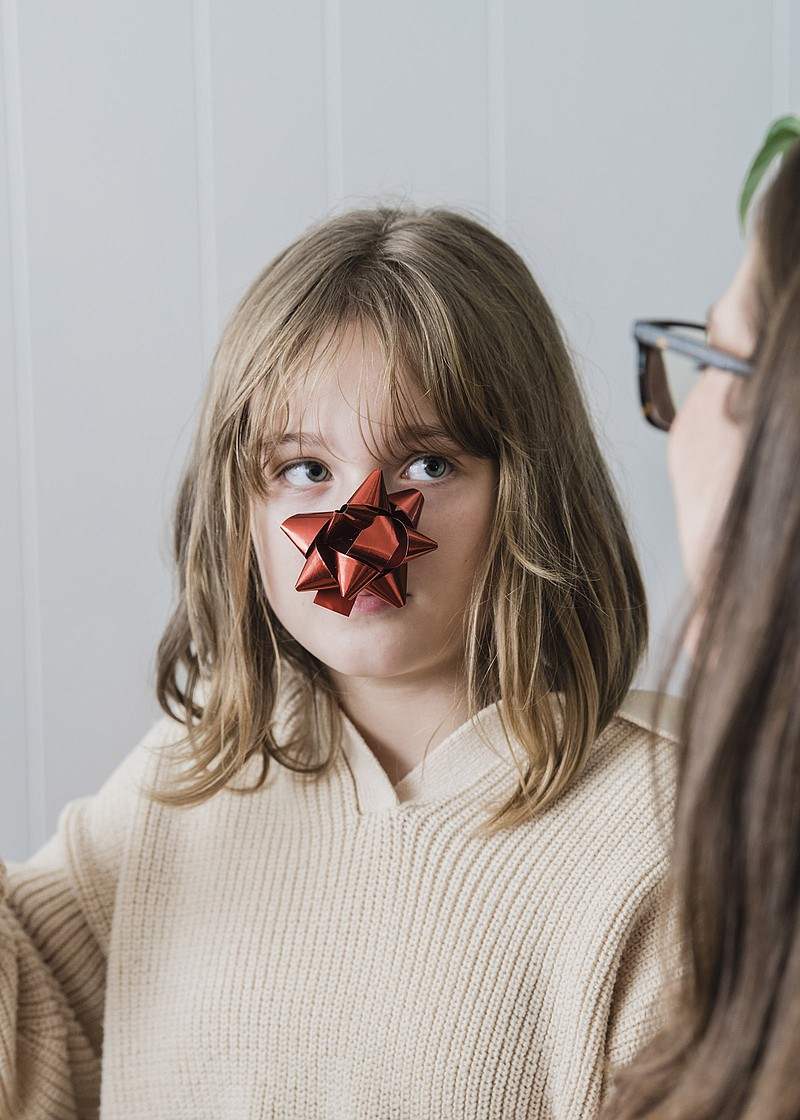 Ena Sargent wearing a bow during present-wrapping at her home in Portland, Maine, Dec. 17, 2021. Some people are resigned to another season of restrictions and plan to forge ahead with celebrations. Others are trying to overcome a sense of perpetual fear. (Tristan Spinski/The New York Times)

This holiday season is bringing a new layer of stressors, especially now that the highly contagious omicron variant is casting a chill on travel and everyday routines. Once again, people are dialing back on plans to attend parties, concerts and movies and Googling the variant's symptoms and taking temperatures -- and the nation's mental health is at a precarious level.

A single mother of two girls, Katherine Sargent is accustomed to working hard to ensure Christmas is a wonderful time, baking cookies and shopping with her children to find new ornaments for the tree.

She had hoped this season would be more cheerful than the last, when schools were shuttered and the vaccine rollout had barely begun. But it hasn't turned out that way.

Even though more people are returning to normal life in her hometown of Portland, Maine, they're finding there's little normal about it.

"They lack the energy to get together, to celebrate," Sargent said. "So many people I know say they're stressed."

On top of pandemic pressures, inflation has driven up the prices of many gifts. Shelves remain barren in many toy stores as popular dolls and games sit aboard container ships in traffic jams offshore from the nation's ports.

Add to that the traditional hassles of tangled light strings and fraught family relations, and it's no wonder that holiday Grump Trees are selling fast at Trader Joe's.

"We entered into this winter feeling more optimistic, and now it's clear the uncertainty continues," said Vaile Wright, a clinical psychologist and senior director for health care innovation at the American Psychological Association.

A recent study for the group showed that people were having trouble making the most basic decisions. And the rules keep changing for family gatherings, with rapid virus tests in higher demand than gifts in some places.

"Covid definitely adds a complexity to the holidays that wasn't there a few years ago," said Tracey Kim Snow, a clinical psychologist in the Chicago area.

Even among the closest of relatives, the vaccination divide has caused hurt and isolation. Some families have forbidden immediate relatives from visiting if they aren't immunized. And some have gone even further by demanding their relatives get booster shots for inclusion around the tree.

"Once again, we're looking at other humans as a risk, and we weren't trained to do that, except in battle," said Dr. Cynthia Ackrill, a lifestyle medicine physician in Asheville, N.C.

Sargent, 37, shifted to remote work to avoid exposure to the virus these past few weeks so she could be with her grandmother along with her parents, her brother and his family for the holiday.

Divorced six years ago, she finds that being a single mother adds extra strain to her planning for a second Christmas in the pandemic.

"It's a lot of pressure to want to give your children so much magic and warmth right now, with so many limitations, and I don't have a partner to share it with," Sargent said.

One survey conducted for the American Psychiatric Association found that women were feeling more stress this holiday season compared with last year's.

The same was true for adults 18 to 44, Republican and independent voters, and those with incomes under $50,000, according to the poll of 2,119 adults conducted last month.

The tensions are evident in national warnings about the nation's mental health and as counselors have been hearing from and seeing more patients and newcomers. Snow, the Chicago area psychologist, said appointments started increasing right after Thanksgiving.

Dr. Itai Danovitch, chair of the psychiatry and behavioral neurosciences department at Cedars-Sinai Medical Center in Los Angeles, said patients were experiencing twin worries from the pandemic and the holidays.

"Those two things colliding increase the background stress," he said.

"I see both people who have resigned themselves to the new norm, and also people who are in a perpetual state of fear," Danovitch said.

Therapists offer a variety of tips and exercises to ease stress, often advising simple tasks like looking for activities to distract people from the pandemic and not watching anxiety-producing news.

Drinking too much and smoking too much cannabis should be avoided, Danovitch said. He suggests searching for ways to be of service in your community by volunteering for a worthy cause or checking in with an older neighbor.

Because holiday meals are well-known minefields for family tension, try to plan ahead for how to defuse those arguments, said Ackrill, a fellow with the American Institute of Stress and an editor of its magazine Contentment.

"Maybe a long walk before dinner," she said. "If you can get outside, that's a great idea. Play a game together. Build in some fun."

And if the family starts discussing divisive topics over the cranberry sauce? Merely point out that people at the table have different viewpoints, she said.

Other simple steps can ease stress: going to bed 15 minutes earlier, taking breaks during the day -- even if it's just walking around or doing jumping jacks -- or watching a funny four-minute video for a laugh, she advised.

Another tool is breath work, a technique of using controlled breathing to calm yourself.

For some, the holidays can stir up painful memories that require regular counseling.

"If that anxiety is really spinning out of control, there's a threshold where you should seek help," Danovitch said.

Kathi Nausedas of Lockport, Ill. -- a Chicago suburb -- is preparing for the second Christmas since her mother's death, and the second after her husband filed for divorce. She is trying to shield her daughters -- Ava, 9, and Audra, 7 -- from the process.

"That first year, I was really scared to face the holidays," Nausedas said. "I was afraid to do all the things I love, like listening to the Christmas music on the radio. The first time it came on the radio, I would cry."

Her mother's birthday was Christmas Eve, adding to the sense of loss.

She sought out counseling with a therapist who has taught her to be easier on herself, she said. Still, Nausedas, a special-education teacher, has worried about how she would pay for presents this year.

"My daughters are so grateful for anything," Nausedas said. "I think I can make anything work, and just be creative in whatever I do. They're the best."

In Portland, Sargent's two daughters, 9 and 10, experienced an unconventional form of holiday glee by getting their second vaccine shots.

"Before they went, they said they were so excited," Sargent said. "I didn't know it would mean so much to them. They were both so happy."