Logistics a tricky lesson for Jacksonville businessman by Noel Oman | December 26, 2021 at 2:11 a.m. 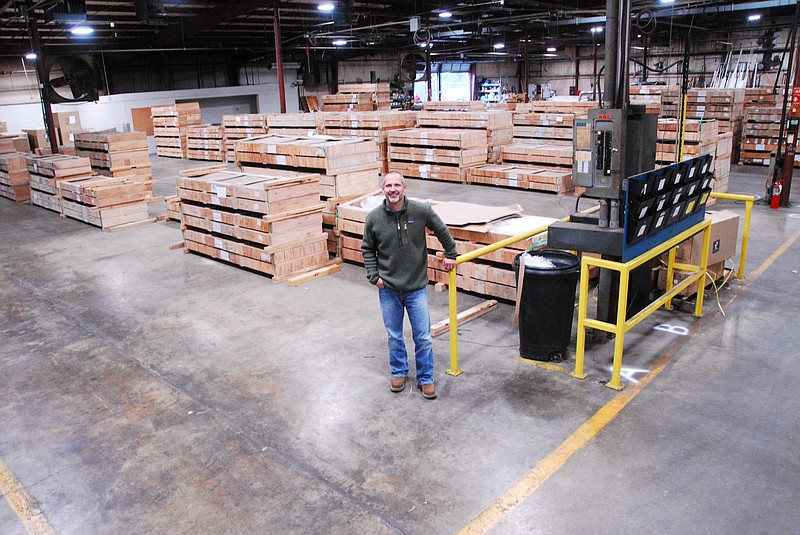 Matt Moudy, the owner of Elite Entries, in front of some stacks of iron doors he has on hand at his warehouse in Jacksonville. (Arkansas Democrat-Gazette/Noel Oman)

Matt Moudy said he thought he was pivoting from a career in dentistry to a career in doors when he sold his Cabot practice and bought a Jacksonville company that designs and installs high-end iron doors for homes.

Little did he know the pivoting would also include learning the ins and outs of transportation logistics.

But that daunting task is what Moudy and thousands of importers large and small have scrambled to understand in the midst of the pandemic, which has disrupted supply chains around the world and injected lengthy waits for products or, even worse, uncertainty about when they will arrive. Or if they will arrive.

Moudy certainly was looking for a change from dentistry.

He had "unbelievable staff and patients" but "after 16 years -- just the grind of it, to be honest with you, I questioned whether it was something I wanted to do until I retire," he said.

And it wasn't, Moudy concluded.

"I love new adventures and change," Moudy said in an interview last week at the 40,000 square foot warehouse and office off Redmond Road in Jacksonville. "I have two children. Neither one of them want to go into dentistry. My son wanted to get into the construction industry. I wondered if there was something I could do that would be a good family business for the future."

Moudy eventually purchased Elite Entries, boutique door company that primarily sells and installs high-end iron doors that can weigh 600 to 700 pounds and cost close to $5,000 or more. The company also sells a line of bath tubs.

While the change in careers happened during the pandemic, the supply chain issues were not on Moudy's radar.

More and more of the doors his company sells and installs are custom projects. His staff uses computer-aided design which is transmitted to his supplier, that produces a door to the customer's specifications.

"From there, [customers ask] how fast can we get it," Moudy said. "Everybody wants it yesterday."

Soon yesterday no longer was possible. The doors were not arriving when they were expected. Moudy wasn't getting answers from the transportation companies handling his one or two shipping containers a month from the port in Xiamen, China, an almost 8,000-mile journey to Jacksonville. He hardly knew what to ask.

"For me, it was learning a new language," he said. "When I bought the business, transportation and logistics in the United States was a different beast than it is today. Even from February until today.

"When I bought [the business], the previous owner, what he knew of transportation, of getting something imported into the United States, he would literally say, the doors are ready, he would go through a company and it would show up at his doorstep 30 to 45 days later."

When Moudy first started running the company, it would take 12 to 16 weeks for customers to see their doors after placing an order.

One of the biggest problems is that there wasn't a way to anticipate the delays or, if there are delays, do anything about them.

Moudy decided he needed help and asked around. A supplier put him in touch with Jason Haith, who manages a branch office in Louisville, Ky., for OEC Group, an international logistics company specializing in Asia and West Asia trade.

Moudy said it was humbling to learn how much he needed to learn.

"I was very naive, to be honest with you, about how things got to me," he said. "I was probably like most Americans are. We take for granted how anything gets to our doorstep. I think I took for granted how much is imported into the United States."

"This entire industry until two years ago lived in the background," he said.

OEC doesn't have a fleet of ships, a rail line nor a trucking fleet. It doesn't own the containers most goods are shipped in these days. The company, instead, coordinates among those different modes of transportation to get a shipping load to its destination. OEC also handles customs declarations and other paperwork.

What OEC did, Moudy said, was "start going to bat for me."

If Moudy was president of the United States, Haith would be his transportation secretary. Even before the actual president announced a plan to open the Los Angeles port for 24 hours a day in an effort to cut into the backlog, Haith counseled Moudy to at all costs avoid the West Coast, which also includes ports at Long Beach and Vancouver.

Even Haith had limits on the tools at his disposal.

"There's not a whole lot I can do if a vessel is sitting 100 miles off the coast," he said.

The problem, as Haith saw it, was that the shipping lines no longer were allowing their containers to be moved inland to Chicago, Memphis, Kansas City and other places in the nation's midsection. They were hard to get back and constituted a sizeable investment. One vessel can hold up to 10,000 shipping containers.

When the railroad companies were unable to pick up the containers at the West Coast ports, no one could fill the void. Containers started stacking up in the port. There weren't enough trucks or drivers to take them. There wasn't enough staffing in the warehouses to load them even if the trucks were available, Haith said.

Haith said if he were in charge, he would have activated the National Guard to staff the warehouses, which he identified as the principal bottleneck.

As for Moudy, Haith recommended he route his doors through the Panama Canal, into the Gulf of Mexico, to the ports at Houston or Mobile, Ala.

It not only eliminated the port congestion on the West Coast, but also eliminated rail as another source of delay.

But it comes at a cost. Going through the canal requires smaller vessels.

"By going on smaller vessels, it costs me more," he said. "For me, it's more important for me to get the doors here than save a buck."

Haith said he thinks the supply chain will have a chance to catch its breath during a two-week lull in shipping that will come with the Chinese New Year celebrations in late February and early March.

But then July comes and the expiration of the longshoreman's union contract with the West Coast ports. The workers often engage in work stoppages. The last work stoppage lasted four months, Haith said.

Moudy won't be taking any chances with the West Coast ports anytime soon.

"It will be cheaper to go back to the other route one day," he said. "But until further notice, we're going through the Gulf of Mexico."

CORRECTION: OEC Group is an international logistics company specializing in Asia and West Asia trade. The company’s name was incorrectly reported in an earlier version of this article. 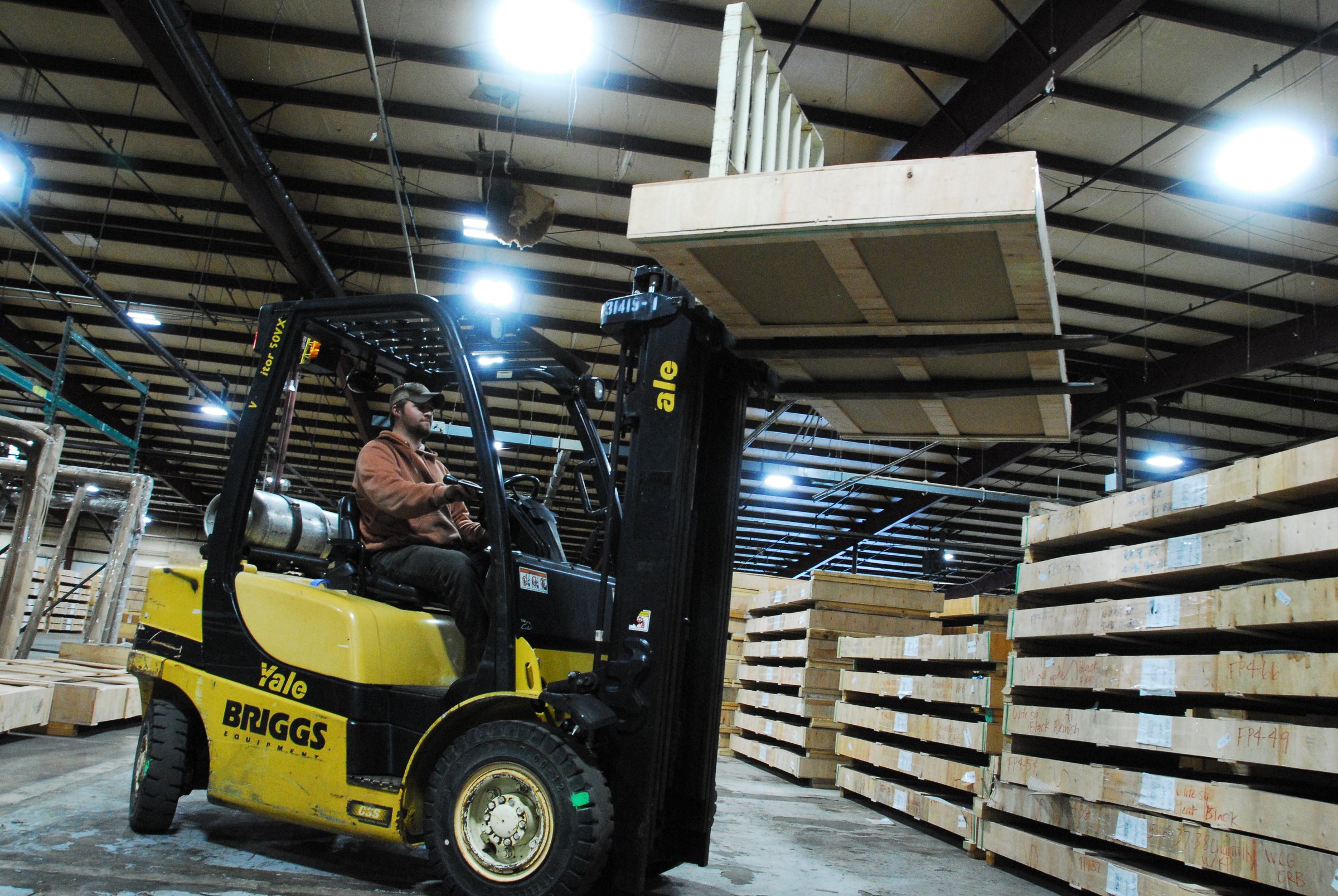