Housing authority shuffles its staff; Little Rock board aiming for savings in ’22 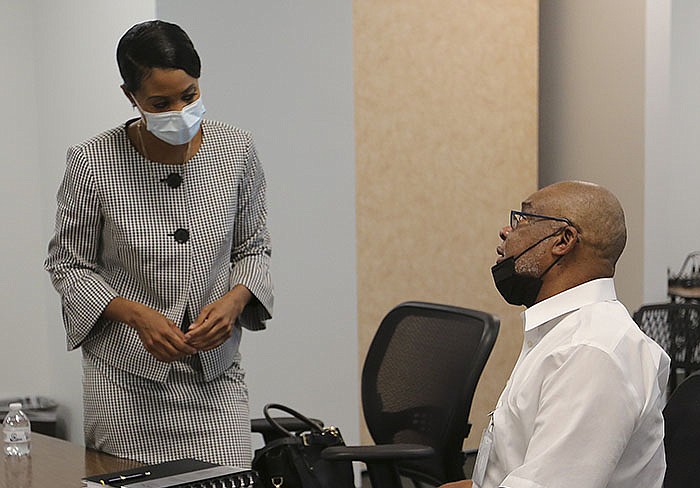 Little Rock's public housing authority expects to turn a profit in 2022 after its governing board approved the elimination of several jobs as part of next year's budget.

The Metropolitan Housing Alliance's personnel restructure "aspires to address the fiscal, regulatory, personnel and operational needs required to advance the agency's mission," according to a resolution the board of commissioners approved at a special meeting Wednesday, authorizing interim executive director Ericka Benedicto to oversee and implement the staffing changes.

The agency started looking at ways to restructure its staff in 2020 but did not follow through, Commissioner Leta Anthony said at an October board meeting. It eventually reached "the point where doing nothing is not an option" to save money and find new revenue, Anthony said.

"[We should] take some serious looks at how the agency is run," she said. "I'm real concerned that we have no vision for new income streams."

The October meeting was not the first time board members or agency staff said the housing authority needed new income to remain financially stable. However, the agency's 2022 budget projects no new income.

Board chairman Kenyon Lowe said in a Tuesday interview that new revenue streams must come from developing vacant properties and "doing that requires some innovation."

The restructure of the agency also includes the addition of compliance managers, two people appointed by the board to monitor housing authority staff members and properties "on our behalf, and on behalf of the rules and regulations we're requiring," Anthony said at the Dec. 16 meeting.

The positions eliminated in the 2022 budget are the deputy director, the Sunset Terrace property manager and about seven positions in the Section 8 housing choice vouchers department.

Several jobs in the Section 8 department were eliminated by attrition instead of letting employees go, Lowe said.

The Metropolitan Housing Alliance oversees about 900 traditional public housing units, 200 affordable housing units and 160 market-rate units. It also administers more than 2,000 Section 8 vouchers. It is the largest public housing authority in Arkansas and provides housing assistance to about 8,000 low-income people.

Andy Delaney, the housing authority's former financial director, told the board of commissioners at a special meeting June 3 that the agency should make significant budget changes to maintain financial solvency.

The new agency structure does not include the deputy director position. Lowe said in an interview that the position is no longer necessary based on assessments of the housing authority's needs. The agency had not done a thorough assessment since 2012, he said.

"Organizational assessments are done to see where your strengths, your weaknesses, your opportunities and your threats are, in and out of the organization," he said.

The assessment revealed there were more employees than there was work, Lowe said.

With fewer positions, the agency will spend almost $34,000 less for central office salaries, according to budget documents. Central office employee benefit costs will drop almost $2,800, and staff training and travel will be cut in half from $20,000 to $10,000.

The Section 8 department brings in the majority of the housing authority's income, with $437,751 in net revenue this year and a projected $413,607 in 2022. Most of the nearly $160,000 decrease in administrative costs will come from the $111,781 decrease in employee salaries due to eliminated positions.

There were 21 positions in the Section 8 department, besides the director and assistant director, in 2019, but there will only be six or seven in 2022, Lowe said.

The Sunset Terrace property manager position is not included in the 2022 budget because Gorman and Co. Inc., a Wisconsin development and investment company, will assume full control of managing the property in 2022, Lowe said. The housing authority retains ownership of the land after a Rental Assistance Demonstration conversion while a private company owns and manages the buildings.

'IT ONLY SEEMS NATURAL'

The agency has not had compliance managers since 2013, when those positions were no longer funded to balance the budget, Lowe said.

The current board revived the position "to ensure that the developers as well as us at MHA are following the same rules and guidelines," he said.

The Metropolitan Housing Alliance has converted five properties through the Rental Assistance Demonstration program and enlisted a Texas-based development firm, ITEX, to convert three more. The agency dropped ITEX and sued for breach of contract earlier this year. Anthony said in October that the dispute put the pending Rental Assistance Demonstration deals at an impasse.

Lowe said the fallout with ITEX was a major reason for reviving the compliance manager position.

The compliance managers will not be responsible for monitoring the executive director, Lowe said, and reinstating the position "had nothing to do with" the turnover of executive directors the housing authority has seen over the past three years. The agency has had six official, interim or acting directors since November 2018.

Anthony first mentioned the upcoming addition of a compliance manager at the board's Nov. 18 meeting. She said the commissioners have a fiduciary responsibility to keep the agency afloat and approve a balanced budget.

The Metropolitan Housing Alliance executive director hired the compliance managers in years past, but the board will be responsible for hiring them in the future, Lowe said, as indicated in the flow chart depicting the new agency structure, provided to the Arkansas Democrat-Gazette with the 2022 budget.

"In our evaluation and review, we found some things that need to be strengthened," Lowe said. "Since the board is responsible for policy and compliance, it only seems natural that [compliance managers] be under the board's direction."

According to U.S. Department of Housing and Urban Development documents, a local housing authority board's "one primary relationship" is with the executive director. The board hires and fires the director, while the director hires and fires all other agency employees.

When asked if the Metropolitan Housing Alliance board was defying federal rules, Lowe said he believed the board's "roles and responsibilities" include hiring "positions that best fit the agency" and he did not believe any federal housing department rules stated otherwise.

He gave the example of the board once hiring a construction manager to report on the progress of Rental Assistance Demonstration conversions that have since been completed.

"The board is responsible for oversight, and we're not about to let that responsibility go unnoticed," he said.

A U.S. Housing and Urban Development spokesperson said Friday that the department "does not provide specific direction" about the extent and limitations of a housing authority board's governing capacity, adding that state and local law are the applicable regulations in this case.

Arkansas law allows housing authorities "to make and execute contracts and other instruments necessary or convenient to the exercise of the powers of the authority."

The Metropolitan Housing Alliance will advertise for the compliance manager positions for about two weeks, starting this week December, Lowe said.