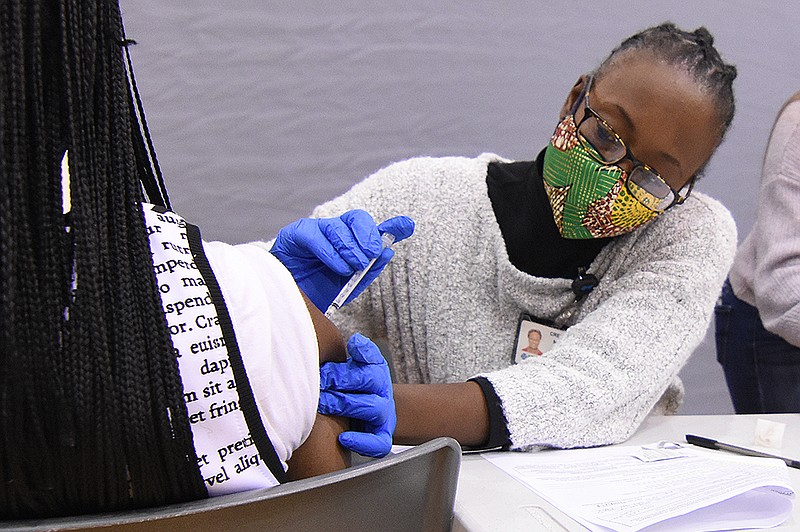 Creshelle Nash, the medical director for health equity and public programs at Arkansas Blue Cross and Blue Shield, administers a dose of the coronavirus vaccine at Jack Stephens Arena on the University of Arkansas at Little Rock campus in this Nov. 21, 2021, file photo. Nash says that addressing structural racism would go a long way to improving health outcomes in the Arkansas Delta. (Arkansas Democrat-Gazette/Staci Vandagriff)

Dr. Valencia Andrew-Pirtle began working in Blytheville more than 20 years ago as a family medicine specialist and, over time, she has learned the most dangerous disease Mississippi County faces is one she wouldn't have thought about decades ago.

"When I think of health disparity in Mississippi County and the type of diseases that are prevalent, I think of depression, hypertension and diabetes, but depression is No. 1 by a long shot," she said. "Twenty years ago, I wouldn't have said that. I wouldn't have known how depression plays a part, but working here, I know it to be true. ...

"You begin to see this pattern happen, but things don't change," she said. "You see this trauma and depression just getting passed down from generation to generation and I believe it's affecting their health."

Arline T. Geronimus, a professor in the Department of Health Behavior and Health Education at the University of Michigan, coined the term "weathering" in 1992 to to describe the toll on one's health from dealing with daily hardships such as poverty and systemic racism. The toll leads to premature aging and disease.

The model Geronimus outlined states that people who experience stressors -- such as transportation worries, food insecurity and a constant state of fear, whether from crime or police -- can wear the human body down at the cellular level, affecting the cardiovascular, immune and metabolic systems.

"One of the ways we have gone wrong when understanding health disparities is we think people are uneducated. Or that it's genetic or it's due to not being able to access certain things," Geronimus said at a July lecture hosted by the Center for Health Journalism at the University of Southern California Annenberg School for Communication and Journalism. "I think the real reality is that people who are exposed to these [situations] try to overcome or survive, but in doing that it may actually cause weathering or contribute to it."

Both Mississippi and Jefferson counties have landed on the Red County list of the state Department Health for multiple years.

The Red Counties were defined as counties where a person's life expectancy at birth was more than six years below that of a person born in the county with the highest average life expectancy.

Both lagged the rankings of Central and Northwest Arkansas counties. In the most recent list, from 2018, Benton County was tops with 79.7 years.

"All those different systems of disadvantage weigh on the body and it gets underneath the skin," said Creshelle Nash, medical director for health equity and public programs at Arkansas Blue Cross and Blue Shield and former head of the state Minority Health Commission. "That is why one of the things you see, is more death and disease in these communities."

Andrew-Pirtle said there is a distinct need for mental health assistance in Mississippi County.

"There are a lot of depressed people in this county, but we don't have enough therapists to help," she said. "I am not talking about more medication, I mean talking to therapists."

"I believe a lot of our issues can be fixed with therapy," she said. "We don't respect it as much as we should, but it's causing us to pay more in health care. I can see reasonable healthy people suffering with diseases that don't make sense because of stress. Skinny people with wacky blood pressure numbers."

Andrew-Pirtle said the largest mental health facility in Mississippi County is Mid-South Health System located in Blytheville, along with smaller facilities Families Inc., Life Strategies Counseling and some entities in the school districts, but the demand greatly outweighs the number of therapists.

"We also need therapists who are going to stay in the area," she said. "We will have patients who will gel with a therapist and then they will up and leave and it is hard for them to find another person they can trust."

Pine Bluff Mayor Shirley Washington said that in areas with large minority and low-income populations, "these populations are more likely to experience chronic conditions, like hypertension for example, and a lack of access to quality health care."

She said that in order to change these outcomes, government need to address the significant barriers like access to and affordability of health care.

"For example, there is a great need for mental health services in Pine Bluff," she said. "That's not unique to our region. It's a national problem."

Washington said the stigma around mental health has lifted over the years, but there are not many mental health resources in the Delta.

"And sometimes, the resources that exist aren't also affordable," she said. "In order to change this, there needs to be more investments in health care across all levels of government, especially the federal government."

The contentious nature of health care has made it difficult for policymakers to agree on substantial reforms, Washington said.

"But there's hope that this is changing, not only with efforts like the Affordable Care Act on the national level and the Medicaid expansion on the state level, but also with policies that may be reevaluated in response to the pandemic," she said.

Nash said addressing structural racism is also an issue that would go a long way to improving the health outcomes in the Delta, as well.

"We have not been able to do that effectively," she said. "I think with opportunities to do that you will see a trickle-down effect of improved health for not only people of color but for everybody.

"We need to have more trauma-informed clinic visits," she said. "We need to have well-trained therapists, but we also need to ask a patient about their past experiences because those affect them as well. ... There is hope because we are finding out more each day why the mind is so important."