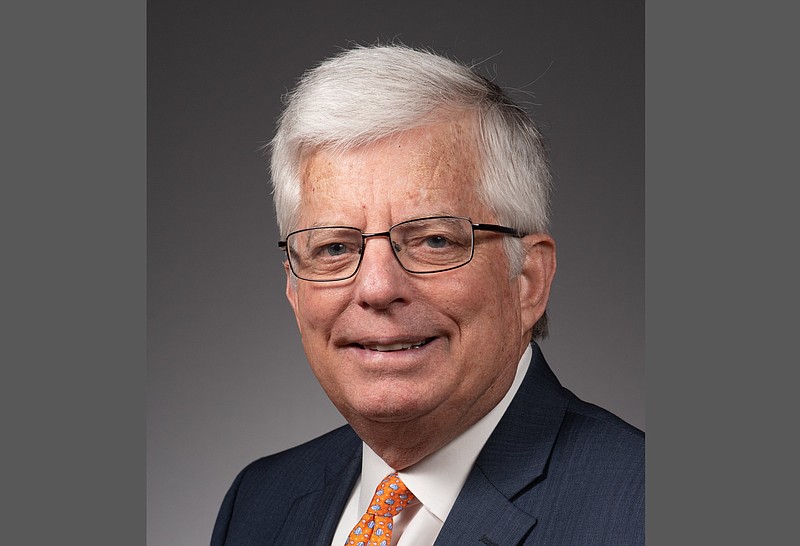 James Carr, a member of the U.S. Commission on International Religious Freedom

The Chinese government is sanctioning an Arkansas man and three other Americans who have accused Beijing of persecuting its Uyghur population.

James Carr of Searcy and the others being penalized are members of the U.S. Commission on International Religious Freedom, which has repeatedly condemned the Communist government's treatment of religious minorities, including the Uyghurs, who are predominantly Muslim.

In January, the U.S. State Department accused China of committing genocide against Uyghurs (pronounced wee-gurs) and members of other minority religious and ethnic groups in the Xinjiang region of northwest China; officials in Beijing have denied the allegation.

On Dec. 10, the U.S. State Department sanctioned four current and former Chinese officials for what it referred to as "gross violations of human rights" in Xinjiang.

"These individuals are prohibited from entering the mainland, Hong Kong and Macao of China. Their property in China will be frozen, and Chinese citizens and institutions will be prohibited from doing business with them," she said during a news conference in Beijing.

Such penalties are allowed under China's "Anti-foreign Sanctions Law," she added.

Carr, who has visited China twice in the past 15 years, learned Tuesday morning that he'd been targeted, along with commission chair Nadine Maenza, vice chair Nury Turkel, and fellow commissioner Anurima Bhargava.

"My first reaction was, 'It's kind of a badge of honor,'" Carr said. "I think these sanctions are kind of a testimony to the important work of the commission."

In its annual report, https://www.uscirf.gov/sites/default/files/2021-04/2021%20Annual%20Report.pdf, released in April, the bipartisan commission portrayed China's record on religious freedom as deplorable, citing reports that it had sent millions of Muslims to detention camps "for wearing long beards, refusing alcohol, or exhibiting other behaviors deemed signs of 'religious extremism.'"

"The Chinese call them reeducation camps or counter-extremism camps," Carr said Tuesday. "You have reports of women being raped, sterilized, children separated from their parents, forced abortions. It's just a very difficult situation for the Uyghurs."

The commission also has depicted China as persecuting followers of Christianity and Tibetan Buddhism as well as Falun Gong practitioners.

In a written statement this week, the commission chair said she was "not surprised to see the Chinese government impose additional baseless sanctions in response to growing concern over its egregious human rights and religious freedom violations, especially its genocidal policies against Uyghur and other Turkic Muslims in Xinjiang. As we have said before -- USCIRF will not be silenced."

Established by the International Religious Freedom Act of 1998, the commission describes itself as an "independent, bipartisan federal government entity established by the U.S. Congress to monitor, analyze and report on threats to religious freedom abroad."

Carr, a Church of Christ member, is a former senior vice president and business professor at Harding University.

Initially appointed to the commission in February 2020, Carr has called the free exercise of religion "a basic human right."

In an editorial Wednesday, the state-run China Daily newspaper said the commission was created "simply to smear countries such as China that the US is trying to suppress."

The commission's reports contain "lies and fabrications" that the U.S. government uses to justify sanctions "against any country it does not like," the paper stated.

"The four members of the USCIRF know nothing about China and the situation in Xinjiang. They are bold enough to tell lies simply because of their ignorance. And the USCIRF itself has no qualms about accepting as truth whatever it is told by secessionists or extremists simply because it is a commission under the US government, which is hostile to China," it wrote.

"In the US, it seems that anything that portrays China as bad or evil which is spread on the grapevine is accepted as truth," it added.

Shortly after Carr learned of the sanctions, a friend emailed him and offered reassurance.

So far this year, China has sanctioned at least seven current or former commission members after objecting to their stances.

Then-chair Gayle Manchin was singled out in March as was Tony Perkins, the vice chair at that time. Johnnie Moore, who had already completed his time on the commission, was sanctioned in May.

"It is truly a symbolic gesture," she said in a text message Wednesday.

Carr and the other commissioners are "doing their job very well, which is why they are being sanctioned; however, I don't think they should plan a trip to China in the near future!" she added.

Robert S. McCaw, government affairs director for the Council on American-Islamic Relations, praised the commissioners for defending the rights of Uyghurs and other Turkic minorities in China and portrayed the sanctions as unsurprising.

"They are absolutely being punished for doing what is right," said McCaw. "If they can't travel to China, it's a small price to pay for standing up for justice and having America lead the way in fighting this genocide."

The Council, which describes itself as the "nation's largest Muslim civil rights and advocacy organization," has characterized China's treatment of Uyghurs as a "crime against humanity."

"Uyghur Muslims and other Turkic minorities are suffering under the genocide of an authoritarian regime in China. Yes, they face censorship, detention, forced labor, rape, sterilization and abortions, in addition to beatings and brainwashing...and reeducation camps," McCaw said.

China's treatment of its Uyghur population has sparked international condemnation.

At the hands of the Chinese government, "Uyghurs, Kazakhs and other Muslim minorities face crimes against humanity and other serious human rights violations that threaten to erase their religious and cultural identities," she added.

In October, 43 mostly-Western nations signed a statement voicing concern about the treatment of Uyghurs and calling on China "to allow immediate, meaningful and unfettered access to Xinjiang for independent observers, including the UN High Commissioner for Human Rights and her office."

Sixty-two nations signed another statement defending China, which portrayed the attacks as politically motivated and based on disinformation.