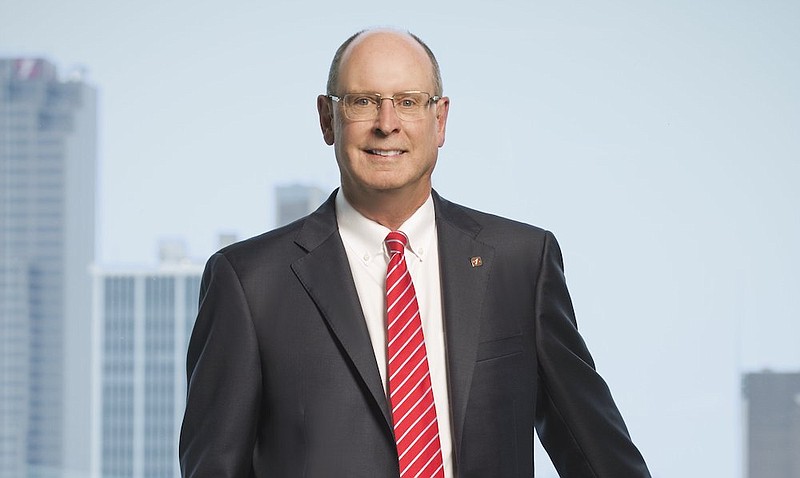 George Makris Jr., chairman and CEO of Simmons Bank, is shown in this submitted photo. (Photo by Jason Masters)

George Makris Jr., chairman and CEO of Simmons Bank, considers himself a longtime fighter for his hometown of Pine Bluff, but when it came to business decisions, he had to make the hard decision to invest outside the city that he loved.

Simmons Bank was founded in 1903 in Pine Bluff. Its parent, Simmons First National Corp., has banks in six states and is growing to this day.

Makris said Little Rock's broadband ability is what sets it apart from most of the cities in the Delta, including Pine Bluff.

To put the Delta on the same playing field as other parts of the state for business growth, there needs to be a large-scale investment in infrastructure, health care, school systems and more, medical experts said.

"You want it to change, then Pine Bluff needs what Little Rock and Fayetteville have," Makris said. "Pine Bluff, Dumas, Lake Village and Monticello all deserve the same opportunity for their residents as other cities, but that hasn't happened. In my opinion, this is not right."

Makris was born in Pine Bluff in 1956 to a family that has run the Anheuser-Busch distribution business in town for decades.

He said that when he was growing up, Pine Bluff was a close-knit community where everybody knew each other, Little League baseball was the town's sport, and the school district received tremendous support.

"At that time, small businesses were thriving," he said. "Every storefront was full and the mall hadn't been built yet. Everybody was close, the churches were full and the schools were very good. At that time, Jefferson County was one of the top five counties in the state in population and the Pine Bluff School District was the second largest in the state. It's very different today."

"I think the first big issue that hit Pine Bluff hard was when the FirstSouth savings and loan went bankrupt," he said.

Soon afterward, several banks began to downsize, resulting in the loss of an additional 250 white-collar jobs.

Makris said that was the beginning of the end of the era of prosperity in Pine Bluff.

"It created a tremendous loss in disposable income and a huge void in leadership and nothing came up to take up the slack immediately," he said. "It led to what you see Pine Bluff is today.

"The business community drove the progress in Pine Bluff during the '70s and '80s and the Chamber of Commerce was active in recruiting businesses," he said. "The chamber is just a shell of itself today and that is not a criticism, it's just a reality."

Makris said many people count on city government to drive the redevelopment of Pine Bluff.

"What the city needs is business-driven development and allow the city to provide the resources," he said. "I think we got it backwards right now."

Over the years, the Simmons Bank Foundation has given money to organizations like GoForward Pine Bluff, the University of Arkansas in Pine Bluff and an Arkansas Children's Hospital clinic near the Jefferson Regional Medical Center.

"Last month the county opened a new veterans center and Simmons gave a million dollars in support and also helped with the new Jefferson County Heart Hospital," Makris said. "We have made a pretty significant commitment to Pine Bluff on the things that will matter long term."

The differences in health, infrastructure and job availability are clear when it comes to comparing Northwest Arkansas to the Delta, but Sen. Ben Gilmore, R-Crossett, said he isn't sure how fair of a comparison that is anymore.

"They both have major roles to play in the state and our economy," he said. "The agriculture industry and the crops grown in rural Arkansas feed the world and that includes folks that live in Northwest Arkansas. There are different roles to play."

Gilmore said the main problem the Delta faces in encouraging investment is that it would be for an area with declining population.

Gov. Asa Hutchinson said the state doesn't have any power on where businesses choose to build, but can support those who choose to invest in the Delta.

"What usually happens is when a business is considering locating in Blytheville or West Memphis, you realize we are competing with other states," he said. "That is when our economic development team can go in and provide additional infrastructure improvements and incentives and compete and win that project."

Gilmore said that at the same time, officials must realize that in certain parts of Arkansas, there are some things they aren't going to be able to do.

"You are probably not going to get the next Amazon headquarters to locate in rural southeast Arkansas, to be fair," he said.

Gilmore said the pandemic showed there is a different way to work and that probably means the concept of downtown in these Delta communities probably won't be coming back.

"I do think there is decline in the downtown, if you will, but that is not necessarily a bad thing in a sense that it doesn't mean there isn't growth or investment happening even though it may not be brick and mortar," he said. "I think we have to realize that jobs look different than they did 50 years ago."

Makris said the population decline in cities like Pine Bluff has created the need to reimagine spaces.

"We have what used to be dense neighborhoods that have one house standing on a city block," he said. "We have a mall that is practically empty. Areas that used to thrive are sort of ghost towns.

"Maybe you don't populate the mall as a mall, but something else," he said. "Maybe do away with some of the residential housing that is sitting empty. Turn some of that empty space into a larger Central Park area for all residents."

Hutchinson said a city that is primed for growth is West Memphis.

"They are such an attractive area for new industry because you have the population base with the Memphis area," he said. "It's one of the few areas in the state that attract large companies that might need 1,000 to 2,000 employees."

The things that benefit West Memphis benefit the region as well.

"Wherever West Memphis goes, it benefits Helen-West Helena and that is the type of regional opportunity that we are looking at," Hutchinson said. "This is not something that we give up on and it's something that we work on every day and have an optimistic view about it."

Gilmore said this type of regional thinking is what needs to be fully embraced for the Delta to thrive.

Gilmore said that from a business standpoint, "communities in southeast Arkansas understand what it means to decline and they understand they are in a fight for survival and that means they have to be very aggressive."

He said there is no need to count out the Delta.

"A lot of people will look at the fact that we are not the same as we were 10 to 15 to 20 years ago and will never be able to get over that," Gilmore said. "They will always be hung up in the past of what we were and they need to look at what we can be."