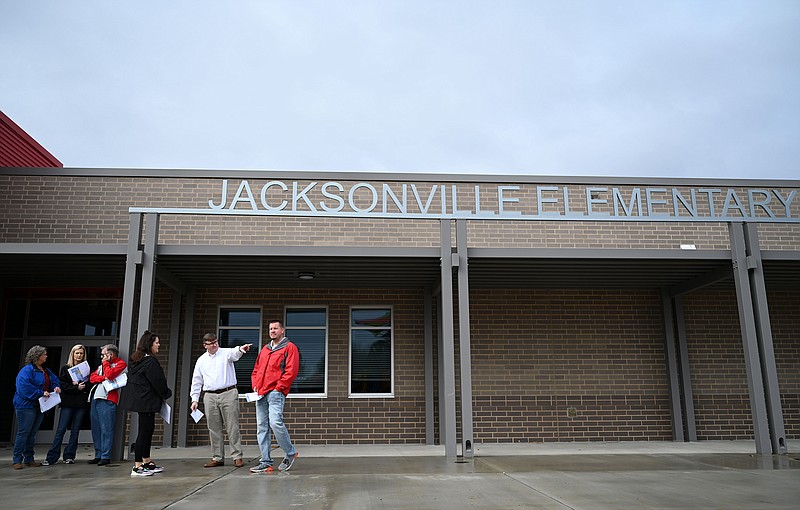 Members of the Jacksonville North Pulaski County School Board look at the drop-off area outside the new Jacksonville Elementary School during a tour of the building on Tuesday, Dec. 14, 2021. Students will start in the new building in January. (Arkansas Democrat-Gazette/Stephen Swofford)

JACKSONVILLE -- The Jacksonville/North Pulaski School District on Jan. 5 is opening its fourth new school and second elementary in 3½ years.

The new Jacksonville Elementary at 2400 Linda Lane will be home to almost 700 kindergarten-through-fifth-graders and 50 staff members who are coming together from the soon-to-be-closed Pinewood and Warren Dupree elementary campuses.

The new brown-brick elementary with red metal trim is next door to Jacksonville Middle School, which opened for the first time in August. If the Linda Lane address sounds familiar, the adjoining elementary and middle schools are on the site of what was once Jacksonville High.

With the new Jacksonville Elementary, the school system has four new schools up and running, with two more yet to build, to achieve its goal -- and the directive of a federal judge presiding in a long-running school desegregation lawsuit -- of replacing all of its eight original campuses with six new buildings.

All of the construction comes in a district that is in just its fifth year of existence. The 3,800-student district detached from the neighboring Pulaski County Special School District and began operating independently in 2016.

The new district inherited the desegregation obligations of the Pulaski County Special district in what is now a 39-year-old federal lawsuit. Those obligations in the two districts include equalizing the condition of aged school buildings, which are often in communities with high populations of Black students, with the newer buildings in the Pulaski County Special district that are in predominantly white neighborhoods.

"It's beautiful," Jacksonville/North Pulaski School Board President Daniel Gray said at the conclusion of a recent board tour of the new elementary that was led by architect Matthew Swaim of WER Architecture/Planners. WER is the company that has designed the district's schools that Baldwin & Shell Construction Co. has built or is building.

"I think our kids deserve it. It's pretty cool to see the vision -- what we hoped for and strove for -- to actually come together," Gray said. "To know what we came from and what these kids have now -- it's such a blessing."

Safety features and classroom walls -- yes, walls -- distinguish the new school from its predecessor schools that were designed in the mid-20th century as "open-space" schools, meaning that only bookcases and other furnishings separated learning spaces and muted noise.

"This transition means our students will get the best facility possible," Jacksonville Elementary Principal April Turner said. "I know for sure they deserve it because they have been in buildings that didn't have classroom walls. I know it will improve their learning and their sense of worth, and it will give them pride in their education."

Jacksonville Elementary's safety features start with an enclosed vestibule that keeps visitors from entering the main school building without being admitted by staff members in the school's administrative office.

The school's cafeteria -- with its large elevated stage on the south end and enclosed kitchen on the north, also serves as a storm shelter, complete with metal, garage-style doors that pull down over hallway and exterior windows in the event of a safety threat.

A multipurpose activity room has a soft floor and material on the wall to absorb sound. The boldly colored outdoor playground in the front of the school is anchored to a rubberized, flexible surface.

The south side of the elementary school is two stories, with the first floor housing the suite of administrative offices, and a hallway of first- and-second-grade windowed classrooms.

On the second floor -- accessible by stairways at either end and in the middle, as well as an an elevator -- are the third, fourth and fifth grade classrooms.

Eight kindergarten classrooms make up a single-story hallway on the school's north end.

In between the north and south ends of the school, on either side of the main hallway, are the cafeteria and multipurpose room as well as the music and art classrooms, and rooms for students with special needs, including rooms for speech and occupational therapy and the two self-contained classrooms. The two self-contained rooms are separated by a "cool-down" room and a utility room that includes a restoom, a shower and a washing machine.

The main hallway and classroom hallways are a combination of gray cement bricks and a horizontal wood- look paneling. Accents of dark orange, lime green, bright yellow, teal blue and red highlight a hallway skylight, and hallway display boards. Classrooms have a color accent wall. Color is used to designate "rooms" or spaces within a classroom.

The new elementary is the latest development in the short history of the district.

As part of the Pulaski County Special School District, Jacksonville-area residents had for decades tried to establish their own district -- in large part to be able to update the old campuses.

Bobby G. Lester Elementary, which opened in 2018, was the first new traditional public school in the Jacksonville area in 37 years. It replaced Tolleson and Arnold Drive elementary schools.

The district intends to next replace Bayou Meto and Murrell Taylor elementaries with new campuses.

District leaders, however, have been in a lengthy dispute with the state's Division of Public School Academic Facilities and Transportation regarding the replacement of Taylor.

The state has maintained that the now 40-year old campus is too new to be fully replaced at the state's partial expense. The district has argued that it has committed in the federal lawsuit to replacing the school with state help.

The district earlier this year filed a complaint in the ongoing desegregation lawsuit over the state's reluctance to participate in funding the new campus. In recent weeks, however, district leaders have become more optimistic about state funding, following an early-review conference with state officials on its plans as allowed by Arkansas Code Annotated 6-20-2515.

Now, the district must file an application by March 1 for state funding for the 2023-2025 state Partnership Program funding cycle.

The state division must fully evaluate all of the project applications and provide to school districts its preliminary written determinations. Project funding will be determined by May 2023 for year one projects and May 2024 for year two projects.

Chief U.S District Judge D. Price Marshall Jr., the presiding judge in the lawsuit, ruled in May this year that the Jacksonville district is unitary and released from court supervision of its desegregation efforts, with the exception of facility issues.

The judge had ruled in September 2018 that the Jacksonville district will be entitled to be released from federal court supervision of its school buildings by 2026 if it follows through on its commitments.

"JNPSD's plan is extraordinary," Marshall wrote in that 2018 order. "Within approximately a dozen years of its creation, the District will have built a new high school, a new middle school, and four new elementary schools. JNPSD's good faith is demonstrated by the plan itself and the progress already made." 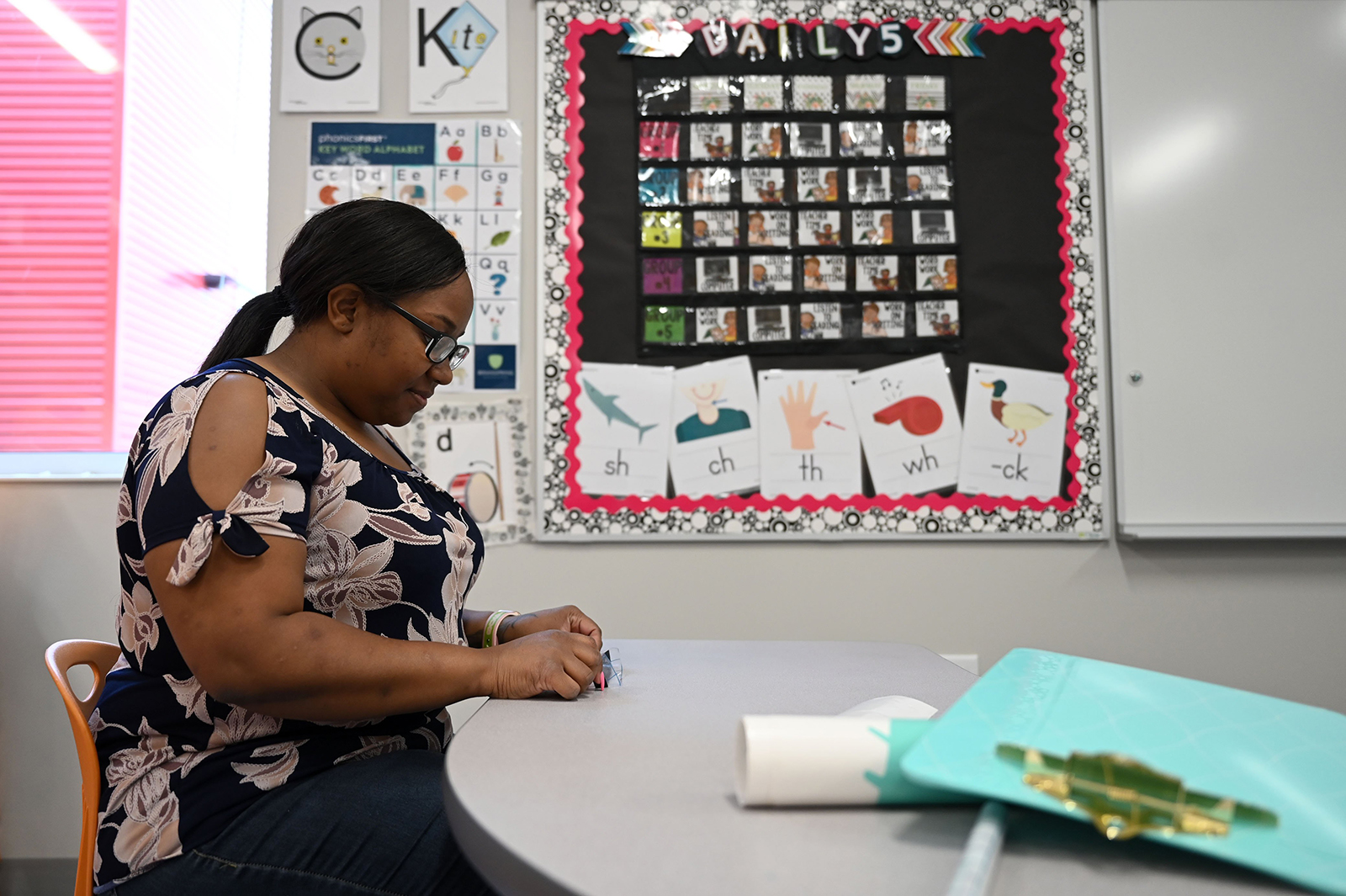 Kortasia Evans sets up her 1st grade classroom in the new Jacksonville Elementary School on Tuesday, Dec. 14, 2021. Students will start in the new building in January. (Arkansas Democrat-Gazette/Stephen Swofford)