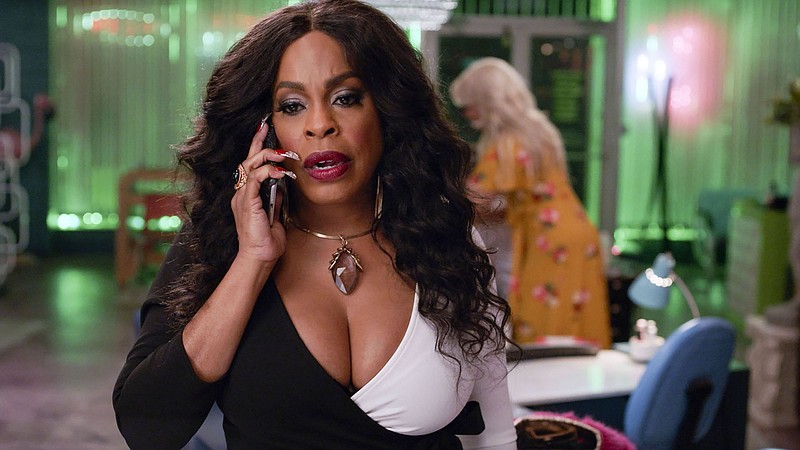 It wasn't until Niecy Nash was 45 that she became a leading lady and was asked to be naked on-screen.

"I said, 'Well, what's going on? Y'all couldn't have called me for this when I was in my twenties and everything was sitting where it was supposed to be?'" she quips over the phone from her home in Los Angeles. That role, of course, was Desna Simms, the South Florida nail salon owner turned money-laundering queenpin on the TNT dramedy "Claws."

Currently perched in her closet ("maybe it's a boudoir"), Nash is taking a moment for herself ahead of the show's fourth and final season, the second episode of which airs Sunday. "It's like a little store inside my house with a couch, so I can relax in here and try on clothes," she laughs.

Like Desna, Nash is rocking some high-quality talons: gold- and silver-glitter stiletto nails. The actress, 51, has learned that being on a show like "Claws" means people "come up to you instantly and want to look at your hands ... so you have to keep something fabulous on your nails at all times."

Nash, who has been working in Hollywood for more than 25 years, says starring in the series has felt like a hard-won career renaissance. It was the first time she was ever No. 1 on the call sheet, something she didn't take lightly. "There's a responsibility that you hold to get your show over the finish line every season," she says. "And I welcomed it."

Born Carol Denise Ensley, Nash landed her first professional acting gig in the 1995 film "Boys on the Side." Since then, she has become a multifaceted entertainer — an actress, comedian and host — who has earned praise for her roles in projects such as "Reno 911!," "Scream Queens," "When They See Us" and "Selma."

But playing a role like Desna is what Nash worked toward her entire career. That dedication is evident in how she approached the series: Despite early call times, the California-born actress would stay up all night on the phone working through script ideas and dialogue, ensuring she was being as thorough as possible. Because Desna was like so many of the women Nash knew who were over 40, the commitment to accuracy came from a personal place.

"(They) were not married, didn't have children, were having sex for their own pleasure (and) bossing up in their respective careers," she says. "I wanted them to see themselves represented on television in a real way."

And she has added her own flourishes throughout the show. Nash was very hands-on when it came to who Desna was dating, and she brought the idea for Sheryl Lee Ralph to play Desna's evil mother-in-law to the show's creators and producers. She also had extensive conversations with the team about ending Season 2 with Virginia (Karrueche Tran) being shot.

The wait for Desna and her tightknit crew of manicurists to return has been a long one; the last season of "Claws" aired in summer 2019. Like the rest of Hollywood, making the final season was affected by the pandemic. "It pushed us back quite a while," Nash says. But the delay ended up being a "blessing" in other ways.

Last August, Nash revealed a surprise in what became a viral Instagram post: She had wed her longtime friend, singer Jessica Betts. She and Betts spent the duration of the pandemic together — Nash was able to enjoy a home she had bought but had yet to stay in for a consecutive month.

Without a forced quarantine, she's not sure if they would have gotten married as quickly. "If you spend quarantine with someone, that's like dating in dog years," she laughs. And while her wedding announcement was also perceived as a "coming out" post, Nash doesn't care for the term.

"The connotation that it comes with is that you were hiding a part of your life," she says. "For me, it was less of a coming out and more of a turning inward — to say you can open up your heart to love however it could."

At this point in her career, Nash knows what she wants in a role. "I like things that make me feel something," she says. "Joy, pain, fear." She has spent the last six months feeling just that, filming her part as Glenda Cleveland, the real-life neighbor of Jeffrey Dahmer, in the forthcoming Netflix series "Monster: The Jeffrey Dahmer Story."

She'll also tackle the thin line between love and jealousy in the Netflix film "Beauty," out next year, portraying a mother whose dreams of becoming a singing sensation are eclipsed by her daughter achieving that same dream.

Despite Nash's abundance of projects, it doesn't make saying goodbye to "Claws" any easier.

While she can't say too much about what to expect in Season 4, Nash reveals that Desna's long-festering addiction to power will come to a head. "You will see what it cost her to have it all" — all with nails that are nothing less than pristine.