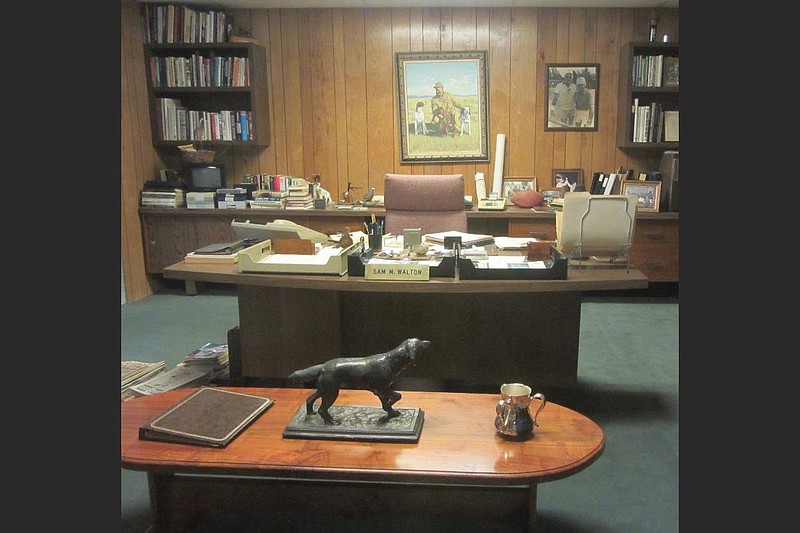 Sam Walton’s office is preserved much as it was when he died. (Special to the Democrat-Gazette/Marcia Schnedler)

BENTONVILLE — As New Year's Eve festivities loom, a sleigh remains parked on the sidewalk of Bentonville's downtown square. Absent Santa and his eight reindeer, it sits outside the Walmart Museum as a prop for holiday photos.

The museum occupies a building where Sam Walton opened one of his earliest stores, Walton's 5 & 10, in 1950. Displays tell the saga of the retail empire he built to make Northwest Arkansas a king of global commerce. Visitors enter through The Spark Cafe, a retro soda shop that pays tribute to Walton's fondness for butter-pecan ice cream.

Museum visitors can begin by watching a five-minute video. In it, Walmart President and Chief Executive Officer Doug McMillon extols Walton as an "unpretentious leader" who "believed in making heroes out of people" and was "an illustration of the American dream."

Those glowing words set the tone for an attraction that has some trappings of a shrine. Among the relics on display are Walton's 1979 Ford half-ton truck, a pair of his hunting boots, and the Presidential Medal of Freedom he received from George H.W. Bush. Family artifacts include the 1943 wedding dress of wife Helen.

The most elaborate memorial exhibit, behind ceiling-to-floor plate glass, is Walton's executive office. The room, preserved as it was before his death in 1992, was transported to the museum complete with paperwork still in place. Its contents provide evidence of a top executive immersed in his work.

A surprising fact mapped out at the museum is that it took Walton quite a long time to build one of the world's largest retail enterprises. A quarter-century went by before his business really began taking off.

An extensive illustrated timeline shows Walton's very gradual progress, beginning with the Ben Franklin outlet he took over in Newport in 1945 at age 27. Five years later, he bought the Bentonville variety store that houses today's museum. Another 12 years passed before the opening in Rogers of Wal-Mart Discount City, his first use of that now iconic name.

Through the 1960s, growth was modest. At the end of that decade, Walton was still merely a regional player, operating 35 stores in four states with $30.8 million in annual revenue. Only in the 1970s did Wal-Mart's growth skyrocket. When that decade ended, 276 stores were producing $1.24 billion a year.

The tone of the museum is as upbeat as the growth statistics. No mention is made of the challenges posed by Amazon and other online behemoths.

There is one melancholy exhibit, a folded American flag added two years ago. Its information panel carries this headline: "The Flag That Bore Witness." It was hanging in an entryway to a Walmart store in El Paso, Texas, on Aug. 3, 2019, when a gunman "bent on destroying our way of life" killed 22 customers.

A message from Walmart's president and CEO asserts that "when the worst happens, we counter with our best selves. We support each other, pray together, stand firm and heal together."