TELEVISION: 'Emily in Paris' lingers on — like the pandemic 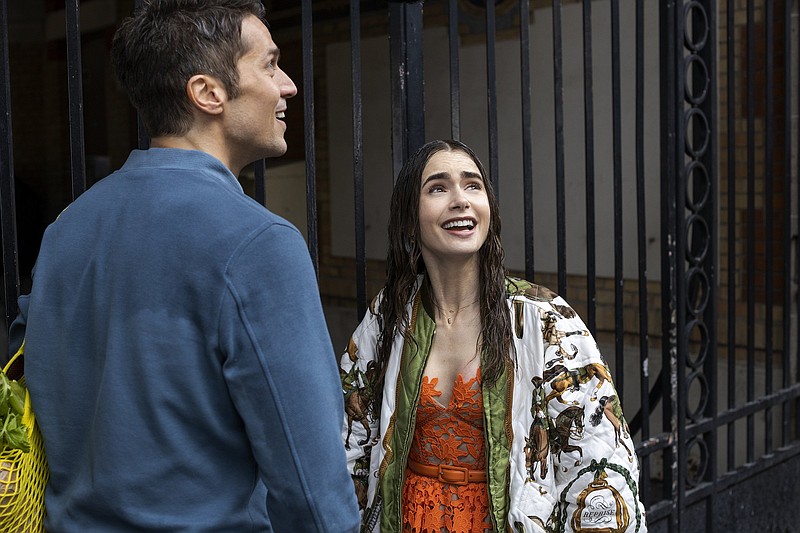 Emily Cooper (Lily Collins) gets stuck in the rain with her hot chef neighbor, Gabriel (Lucas Bravo), in the new season of “Emily in Paris.” (Netflix/Carole Bethuel)

"Emily in Paris" is back, for better or for worse.

The Netflix series premiered in late 2020 to the horror of many who expected a lighthearted romp about a charming American working abroad in France for a year. Although the show adopted a cheery tone, its episodic happenings evoked the sort of anxiety this writer most associates with watching Adam Sandler make one questionable decision after another in "Uncut Gems," a protracted heart attack of a film. Marketing executive Emily Cooper (Lily Collins) is not as charming as she is undeservedly audacious, so sure her croissant-fueled perception of French people is authentic and therefore worth upsetting the careful equilibrium of her boutique agency.

Emily documents her (mis) adventures on Instagram, and we are to believe her inane posts are interesting enough to turn her into a successful influencer. Her colleagues, including her uptight boss Sylvie (Philippine Leroy-Beaulieu), are eventually won over by Emily's persistence — which, fine, this is a made-up show. More surprising was that the Hollywood Foreign Press Association, which consisted of 87 real people, deemed the show worthy of a Golden Globe nomination for best comedy series. Then came the Los Angeles Times expose revealing that producers had paid for more than a third of the Hollywood Foreign Press Association's membership to visit the French set back in 2019.

All in all, "Emily in Paris" turned out to be a bit of a sham.

But viewership statistics don't differentiate cretins from earnest fans, and the show was renewed for another season. It picks up where the first left off, Emily just having slept with her hot chef neighbor, Gabriel (Lucas Bravo), who also happens to be the very recent ex of her friend, Camille (Camille Razat). It's messy, but so is everything in Emily's life. This is something you watch with low investment in anyone's well being.

Which could be why the show performed so well for Netflix, despite Emily's behavior. It premiered during the first year of the coronavirus pandemic and provided a harmless outlet for everyone's frustration. The second season arrives on the cusp of our third year dealing with this wretched disease, amid the spread of a highly contagious variant. I dreaded watching the new season until I woke up one morning feeling like I had been hit by a truck (coronavirus test results pending — fingers crossed). My body refused to situate itself any way but horizontally, leaving me with no choice but to make my way through all 10 episodes of this particular assignment. Reader, I did it in one day.

Having helmed series like "Younger" and "Sex and the City," "Emily in Paris" creator Darren Star excels at only requiring his audiences to be mildly alert. The New Yorker last year referred to this as "ambient television"; a friend of mine recently opted for the term "smooth brain" TV. While not at all structured as a sitcom, this show resolves its conflicts so quickly that, by the time you realize you missed a plot point, it's already moved onto the next. It's the perfect bleary-eyed watch, and not just because that helps dull the sight of Emily's bright outfits.

This isn't to suggest Emily has gotten any more reasonable. The American remains insubordinate, whether ignoring her boss' orders not to conduct client work on the weekend — defiance that somehow involves Emily asking a waiter to spray her with Champagne at a restaurant in Saint-Tropez — or posting a celebrity product endorsement to Instagram without looking into the celebrity's past. But the show seems more aware of Emily's flaws this time around, which I will attribute to Collins' Globe-nominated ability to play up the character's vapid nature.

And since the bar is clearly on the ground, might I dole out some praise for the "Emily in Paris" writers' decision to pretend the coronavirus doesn't exist? For a show of this genre, the options seem to be either to treat the pandemic as a throwaway detail — such as in the new "Sex and the City" reboot "And Just Like That ...," which mentions how much Manhattan has changed because of the pandemic — or to make an oddly sentimental story line out of it. Both can feel like a slap in the face. It is much better to be miserable without a constant reminder of why you are miserable.

Such is the appeal of "Emily in Paris," which, much like the croissants she insists on Instagramming, is full of nothing meaningful but will always be there for those who are tempted.