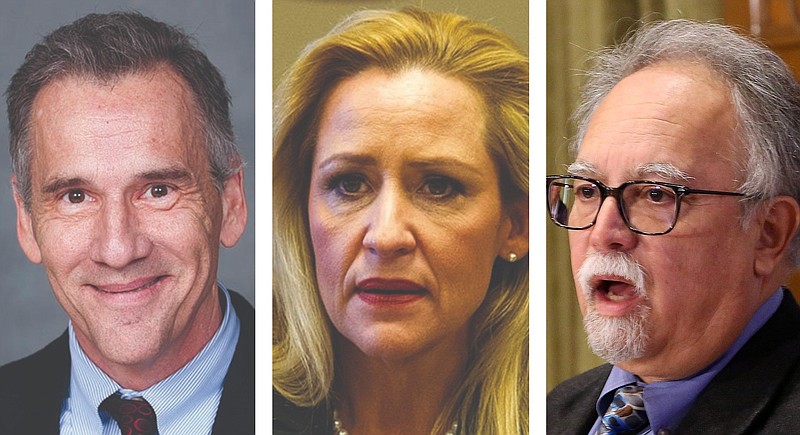 Act 1002 of 2021 prohibited state and local governments, including public school districts, from mandating that individuals wear masks during the coronavirus pandemic.

Circuit Judge Tim Fox said in his ruling that the act violates the separation of powers clause by attempting to usurp the constitutional authority of county judges and the Arkansas Supreme Court. Fox said the act also violates the equal protection provisions of the Arkansas Constitution by discriminating between minors in public and private schools, along with other violations.

"It is unclear from the Attorney General's brief whether that office is actually arguing that sovereign immunity means there is absolutely no situation in which an action may proceed against the State," the ruling said. "If such an argument is being made, it is untenable. For the argument to be valid, specific constitutional provision would have to be interpreted as being superior or 'super-preemptive' to every other provision of the Arkansas Constitution. Under such theory, the General Assembly could violate the separation of powers doctrine at will and there would be no judicial review of such legislation."

Fox's ruling came after the court heard testimony from 12 witnesses, and the attorney general's office failed to call any witnesses or attempt to introduce any exhibits to defend the constitutionality of Act 1002.

"Given the testimony of Dr. [Jose] Romero, the Arkansas Secretary of Health, about the combined use of vaccinations and masks this seems to be an intentional act on the part of the Attorney General to deliberately mislead the court," Fox said in a footnote to his decision. "Several pages of the Attorney General's brief contain a timeline about who knew what and when they knew it. Absolutely none of the statements are supported in the record before the court because the Attorney General chose not to call any witnesses."

Tom Mars, a Rogers attorney who filed the lawsuit on behalf of plaintiffs Veronica McClane and Ashley Simmons, said Fox's comment was one of multiple statements that stood out in what Mars described as an "unprecedented" ruling.

"I have been a lawyer for 35 years and never seen or even heard of anyone defending a case and not calling a witness or offering evidence," he said. "On the other hand, having studied the facts and the law of this case before I filed it, I came into this trial knowing the attorney general had nothing to really defend the constitutionality of this statute."

"I don't remember a trial where the other side didn't present any witnesses or make any case at all, especially after making a big show on challenging the preliminary injunction," Heller said. "This goes to show the importance of judicial review of legislative actions. The decision was clearly wrong and not based in medical testimony. ... That is why nobody came forward from the state to defend it."

Amanda Priest, spokeswoman for the attorney general, said Wednesday that Rutledge was reviewing the opinion and will determine what steps the office will take next.

Gov. Asa Hutchinson, who signed Act 1002 into law but said he regretted it, said Wednesday in an emailed statement that he was pleased with Fox's ruling.

Hutchinson, a defendant in the initial lawsuit, retained his own counsel on appeal to argue that the injunction should remain in place, putting the governor at odds with fellow Republican Rutledge and legislative leaders.

"The ruling that Act 1002 is unconstitutional serves as a restraint against the legislative branch and helps reset the correct balance between the branches of government," Hutchinson said. "The ruling also makes it clear that local school boards have the authority to protect the health of students during this pandemic. I am in favor of schools and local government having the authority to keep students and their constituents safe as we see another surge in Covid-19 cases."

Fox issued a temporary injunction of Act 1002 in August after several parents, two school districts and Pulaski County officials filed a lawsuit challenging the legality of the face-covering ban passed by the General Assembly in April.

In the wake of the injunction, school districts across the state began implementing mask mandates for students, teachers and staff. Many of those mandates remain in place; others were relaxed as the number of covid-19 cases in the state declined in recent months.

Public health officials have said wearing masks helps protect people from the coronavirus and curtails its spread. Parents and school administrators who supported a mask mandate voiced concerns about protecting students who are too young to be eligible for a covid-19 vaccine.

The plaintiffs contended the legislation was too strict and overreaching. Local entities, especially school districts, should have the flexibility to enforce the mandates, they argued.

After Fox's injunction in August, Rutledge said she would appeal the ruling to the Arkansas Supreme Court to end the temporary ban on enforcing the mask act. The state Supreme Court in October denied the request to remove the injunction ahead of a November hearing.

McClane said she was pleased with Fox's ruling.

"I am excited that people who are looking out for the most vulnerable and people who are trying to do their part to end this pandemic can mandate masks if they choose to do so," she said. "I don't want to force people to wear masks, but they need to be able to do so if that is what is best for the community. We are past the individual thinking and more of the community as a whole."

Mars described Fox's ruling as unprecedented because of the number of counts found unconstitutional.

Fox also addressed Rutledge's initial attempt to serve as the attorney of record for all defendants, including Hutchinson, who hired an independent attorney instead.

Mars praised Hutchinson's decision to distance himself from Act 1002, hiring his own lawyer and siding with those who called the act unconstitutional.

"I would say it was a courageous decision on [Hutchinson's] part to not just step aside, but to get into the fight," Mars said. "I hope he gets the credit he deserves for something that is unprecedented in Arkansas, and probably the planet."

Romero, the state's secretary of health, testified there have been more than 6 million pediatric covid patients diagnosed nationwide, with 700 children dying from the disease. He said children ages 5 through 11 made up about a third of the covid-19 pediatric patients, which is now among the top 10 causes of death for pediatric patients.

Romero testified that data compiled by the Arkansas Department of Health showed there was a 20% reduction in infection at schools where masks were worn by both adults and children compared with schools where masks are not worn. He said during testimony there was "no doubt" that not allowing schools to have a mask policy puts children at excessive risk and that it is particularly important that masks be used in schools.

"The unsung heroes of this case are the parents," Mars said. "One person or two, in this case, can make a significant difference and, in our opinion, saved lives across Arkansas. These parents had the courage to step up and put themselves in the spotlight and receive the criticism and attacks and spend days in court."

McClane said Wednesday the past few months have been more than she bargained for, but she said she would do it again if needed.

"I was called a hypocrite because I did all of this right before school started, and when the another surge happened we decided to keep our oldest virtual [learning] until he got vaccinated," she said. "I want people to know this wasn't just about me and my child, but my friends who are single mothers who don't have options, the teachers who work in the schools, and the clients I know who have lost family members to this disease."