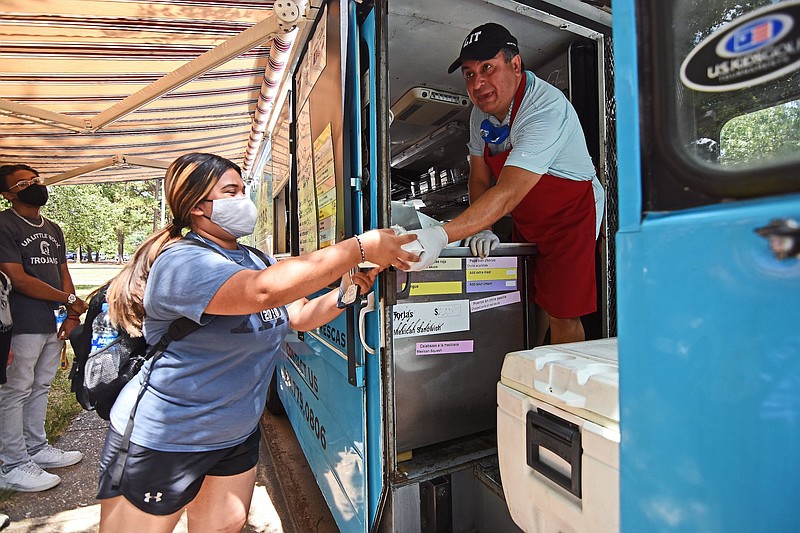 Popular mobile taco establishment — aka taco truck — Tacos Godoy is setting up shop in the former Thirst N Howl, 14710 Cantrell Road, Little Rock. Owner-operator Alejandro Gutierrez says they've been working on the storefront for a year and are finally getting ready to open it, first or second week of January; customers will order from one of their two food trucks parked outside and take their food and drink inside for consumption. Gutierrez describes the idea as essentially a food truck court; he says another food truck operation is getting ready to announce sometime this week that they'll be opening a similar establishment next-door in what had been most recently JK's Bar-B-Que.

Gutierrez says the food truck court concept will keep his overhead low; if it's wildly successful, he adds, he'll consider pulling the truck and turning the space into a full-service restaurant. Repairs on the truck and the same staffing difficulties that have plagued just about every other area restaurateur are the main causes of the delay in getting the storefront open, he explains. Meanwhile, his other food truck will continue to travel about Central Arkansas and he has a smaller truck for catering operations.

Hokaben Japanese Kitchen, 115 Carnahan Drive, Maumelle, has closed — after less than six months in business — and a sign on the building says that it'll soon be an outlet of Sharks Fish & Chicken. Calls placed to the phone number on the sign, (501) 734-8220, got us only as far as a voicemail box.

Meanwhile, one of our readers reports that Gino's Pizzeria & Philly Steaks is going into the space at a gas station/convenience store at 10101 Interstate 30 that, we're told, used to be a Sharks. Expect it to open in early January once the management solves the problem of — you guessed it — staff shortages. It's a second southwest Little Rock location for Gino's, which has been operating for a couple of decades, and will continue to do so, in a Shell station just up the interstate at 8000 Geyer Springs Road. The phone number there is (501) 562-0152.

If you are not among the folks counting down the hours until the end of 2021, you may be unaware that Friday is New Year's Eve, and since New Year's Eve falls on a Friday this year, it's likely that even in the throes of the pandemic, many places will be open for various degrees of celebration. A couple of them sent their information this way:

◼️ Allsopp & Chapple Restaurant + Bar, 311 Main St., Little Rock, has sold out its $99 four-course New Year's Eve dinner, but they're offering the same meal, 4-10 p.m., on Saturday, which, according to intense calculation on our part, is New Year's Day. Chef Bonner Cameron is serving (choose one from each course), for openers, Hawaiian ahi tuna with wontons, wasabi cream and sesame-seaweed salad; duck pastrami with fig jam, pickled tart cherries, petite arugula salad and flatbreads; or char-grilled Gulf oysters with a Worcestershire and garlic butter sauce. For course 2: a salad of baby kale, dried cherries, blistered tomatoes, cucumber, pickled red onions, olives, Gruyere cheese and focaccia croutons in a sweet herb citrus vinaigrette, or a crab and corn bisque with basil pesto. The entree: Lobster tail with Gulf shrimp, a wild mushroom/sweet pea risotto and micro-bunching onions; Wagyu short ribs slow-braised in red wine with a mushroom-asparagus power blend slaw and roasted fingerling potatoes; or a Surf and Turf (a 6-ounce coffee-cured filet in a cabernet demiglace with two jumbo shrimp), accompanied by smashed potatoes and asparagus. And there's a choice of three desserts. Call (501) 902-4911 or visit allsoppandchapple.com for reservations. Complimentary valet parking is available.