The biggest entertainment stories of 2021 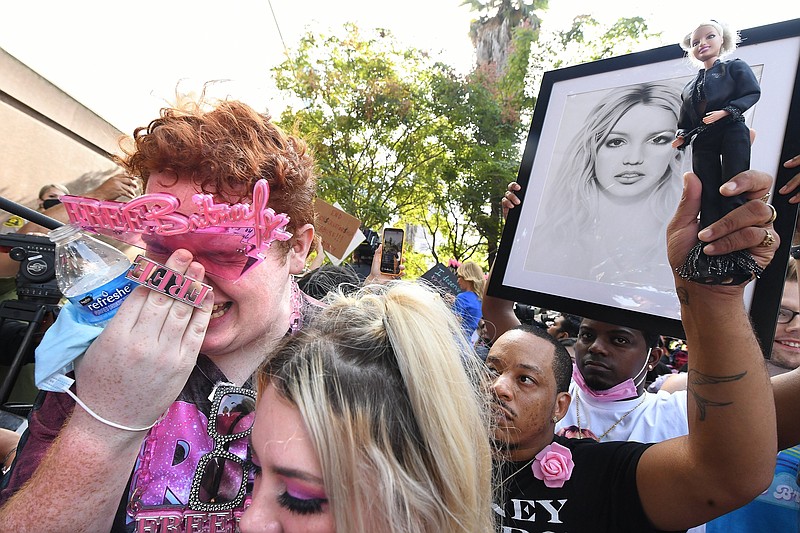 A Britney Spears fan cries outside the courtroom after the announcement that Spears’ father, Jamie Spears, is suspended from her conservatorship, in Los Angeles on Sept. 29. (Los Angeles Times/TNS/Wally Skalij)

Bennifer made up, Kimye broke up, Britney spoke up, K-drama blew up and powerful men screwed up. What a year it was!

As December draws to a close, let's take a look back at the top entertainment stories that made us laugh, cry and gasp.

An explosive documentary on the troubled life of one of pop music's biggest stars introduced the world to the #FreeBritney movement, and the word "conservatorship" to the vernacular. "Framing Britney Spears," by director Samantha Stark, ignited a made-for-social-media cultural revolution, cryptic Instagram messages by the "Womanizer" singer, jaw-dropping public testimony in which she accused her loved ones of abuse and the celebrated termination of the 13-year legal arrangement that placed her father as her conservator.

The global obsession with Netflix's bloody dystopian thriller "Squid Game" went beyond the reported $900 million earned by the streaming giant. It also triggered a sizable cultural response in the United States, influencing what fans are buying, wearing and even learning. Sure, K-pop groups have been increasingly dominating the zeitgeist of the pandemic era, and Korean films have broken the language barrier and gone mainstream in the U.S., but the premiere week of the Golden Globe-nominated drama saw a 40% increase in people signing up to learn Korean on Duolingo, the language-learning app, while the show made sales of white slip-on Vans sneakers — worn by most of its characters — jump 7,800%. 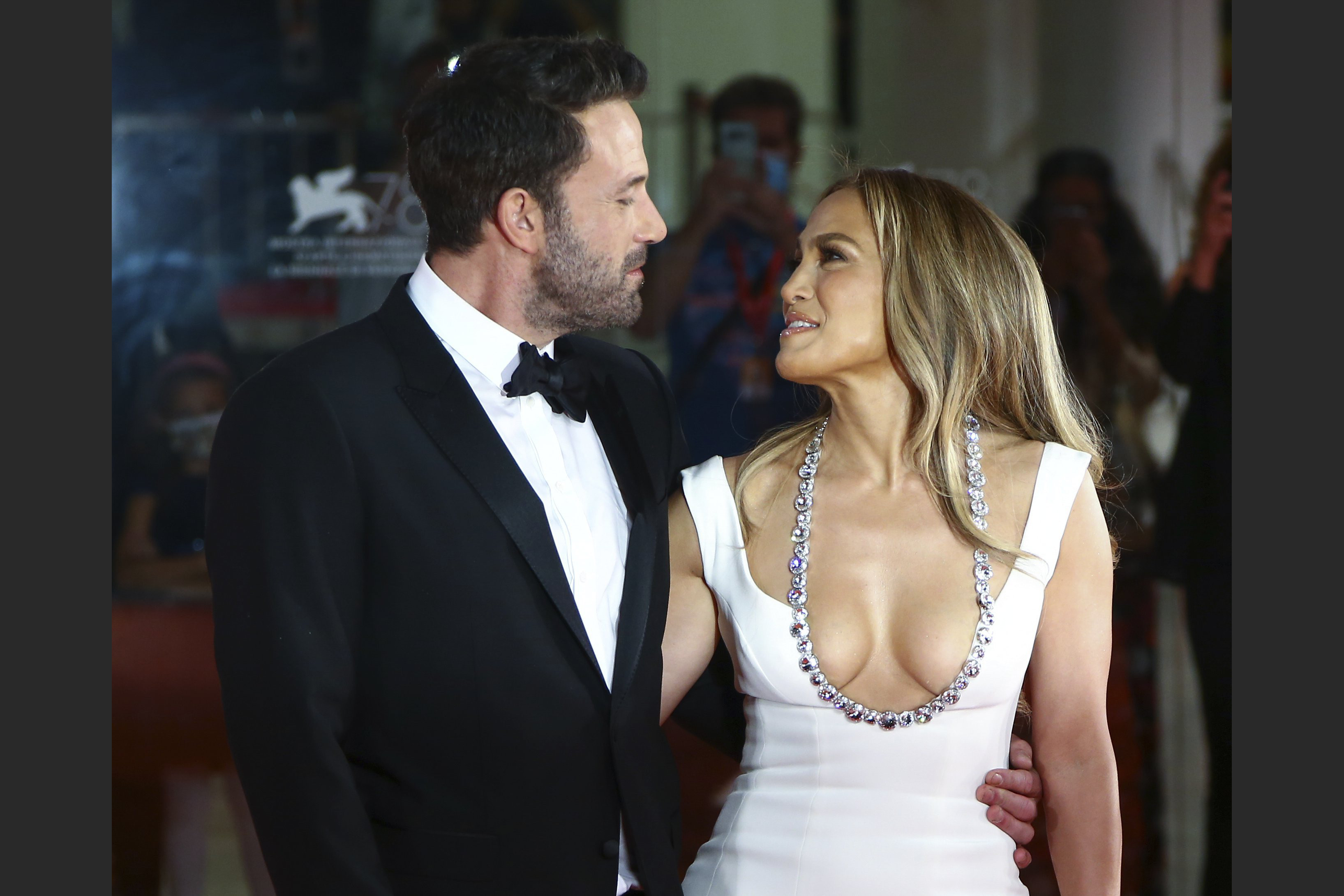 Jennifer Lopez and Ben Affleck pose for photographers upon arrival at the premiere of the film “The Last Duel” during the 78th edition of the Venice Film Festival on Sept. 10. The couple reunited in 2021. (Invision/AP/Joel C Ryan)
BENNIFER'S HAPPY ENDING

Bennifer, arguably the top celebrity supercouple name of the modern era (sorry, Brangelina!) returned to tabloid headlines and social media timelines in 2021. Pop superstar Jennifer Lopez and Oscar-winning actor/director Ben Affleck rekindled their early oughts romance, which started in 2002 after the two met on the set of the movie "Gigli" and ended just days before they were due to tie the knot in 2004. In September 2021, after months of speculation, the Hollywood A-Listers made their rekindled love public on the red carpet at the Venice Film Festival. 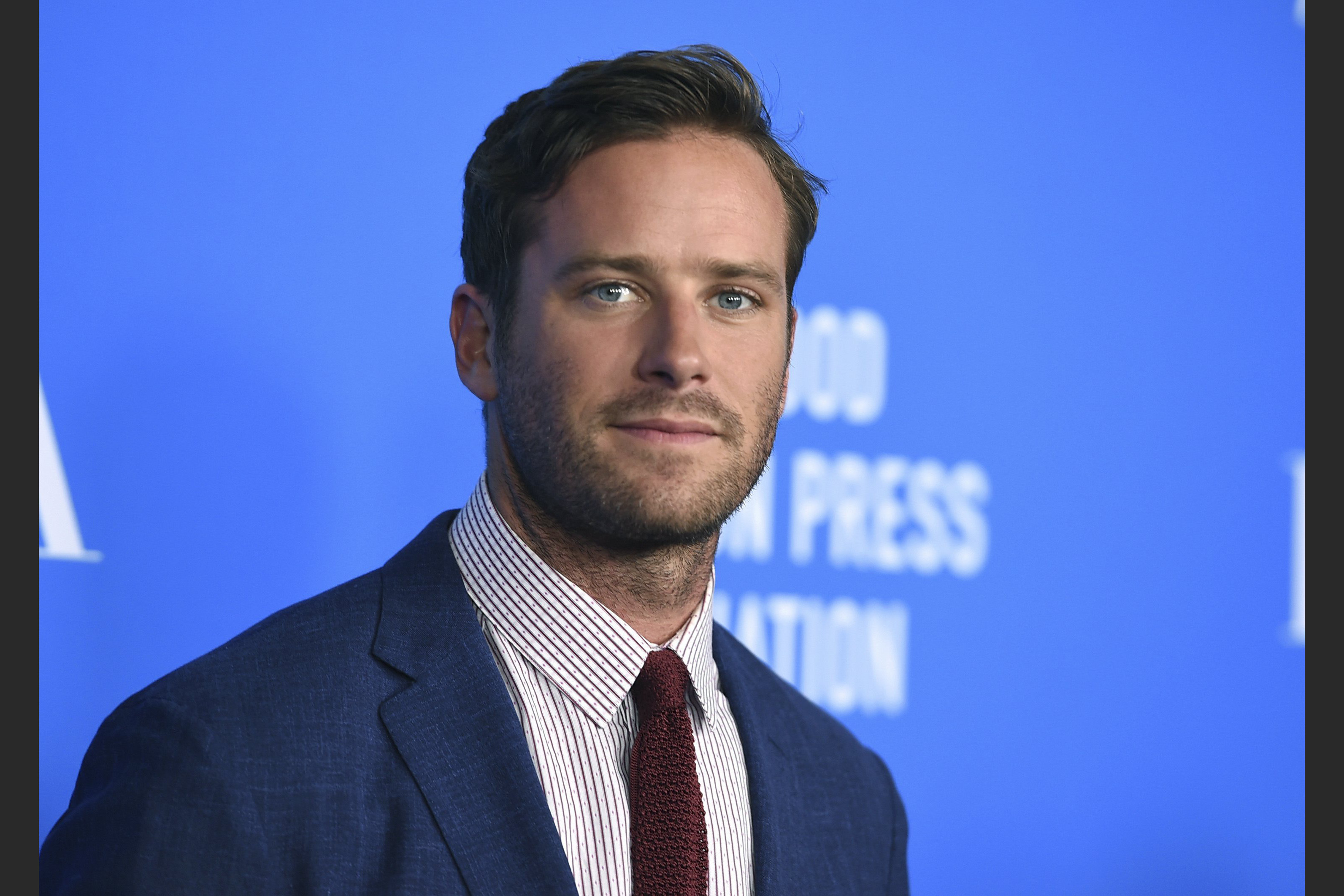 Armie Hammer, shown here in a 2017 file photo, saw his career and personal life collide and implode in 2021. (Invision/AP/Jordan Strauss)
(NOT) HAMMER TIME

Armie Hammer, the blue-eyed, boy-next-door star of "Call Me by Your Name," started the year defending himself from allegations of sexual abuse and misconduct. After a series of text messages mentioning mutilation and sexual domination — which had been allegedly written by the actor — were published on various outlets, his ex-wife called him a "monster." He then announced he was stepping down from at least three high-profile projects, and checked himself into an unnamed Florida facility seeking treatment for drug, alcohol and sex problems. On Dec. 13, an attorney for the 35-year-old actor confirmed that he had been discharged and was "doing great."

It was a tough year for the rapper formerly known as Kanye West — who's no longer in a relationship formerly known as Kimye. In February, reality TV star Kim Kardashian filed for divorce from the "Donda" rapper, citing "irreconcilable differences." During a Thanksgiving event in Los Angeles, Kanye, who now goes by the name Ye, said that he needed "to be back home," and admitted to having "made mistakes" during his six-year marriage to Kardashian.

Will you accept his apology? Chris Harrison, the longtime host of the "Bachelor" franchise announced in June that he was stepping down from his duties after nearly two decades of rose ceremonies and heartbreaks. His decision comes months after comments he made during an interview prompted a massive backlash among viewers. Harrison, who has been the host of the show and its spinoffs since 2002, defended "Bachelor" contestant Rachel Kirkconnell after she was criticized for photos that showed her dressed in American Indian attire. He later apologized for "wrongly speaking in a manner that perpetuates racism."

Former CNN anchor Chris Cuomo was fired from the network Dec. 4, just days after he was suspended for helping his brother, ex-New York Gov. Andrew Cuomo fight sexual harassment accusations. Chris, one of the news network's biggest stars until his fall from grace, was also accused of similar behavior. His termination came after CNN officials announced that "additional information [had] come to light." Big brother Andrew resigned in August after fiercely denying any wrongdoing for weeks. The allegations from multiple women dated back years. On Dec. 12, a state ethics board ordered him to turn over $5.1 million in profits from his pandemic memoir, "American Crisis: Leadership Lessons from the Covid-19 Pandemic." 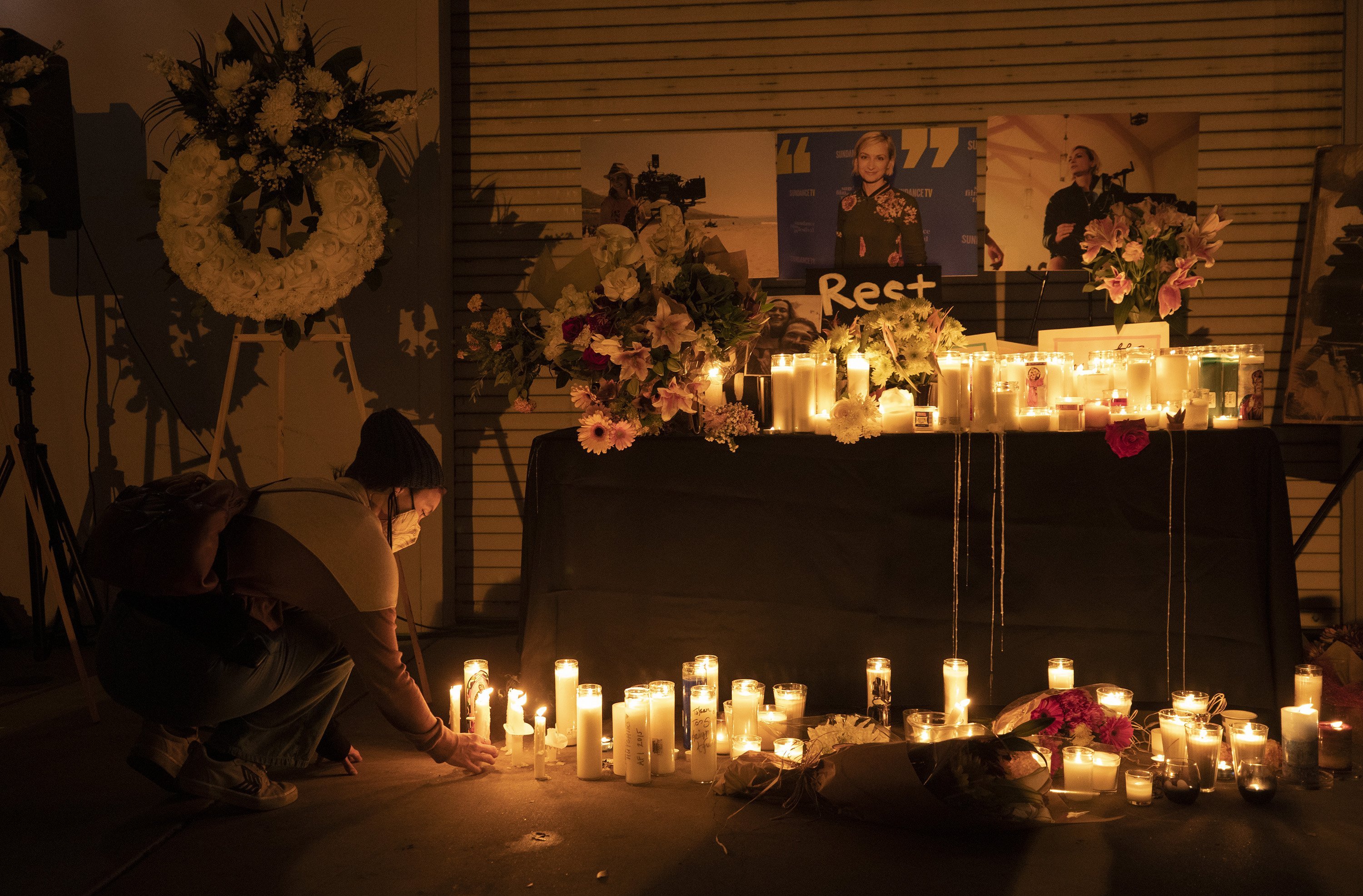 In October, actor Alec Baldwin was involved in a tragic incident involving a prop gun on a New Mexico movie set that took the life of Halyna Hutchins, a 42-year-old cinematographer, and wounded the film's director, Joel Souza. According to a police report, Baldwin was told by an assistant director he'd been handed a "cold gun" — which should have meant it was safe to use. However, a live bullet in the gun ended up killing Hutchins and wounding Souza. Speaking publicly about the "horrible, catastrophic" event for the first time on Oct. 30, the Emmy-winning actor denied pulling the trigger. 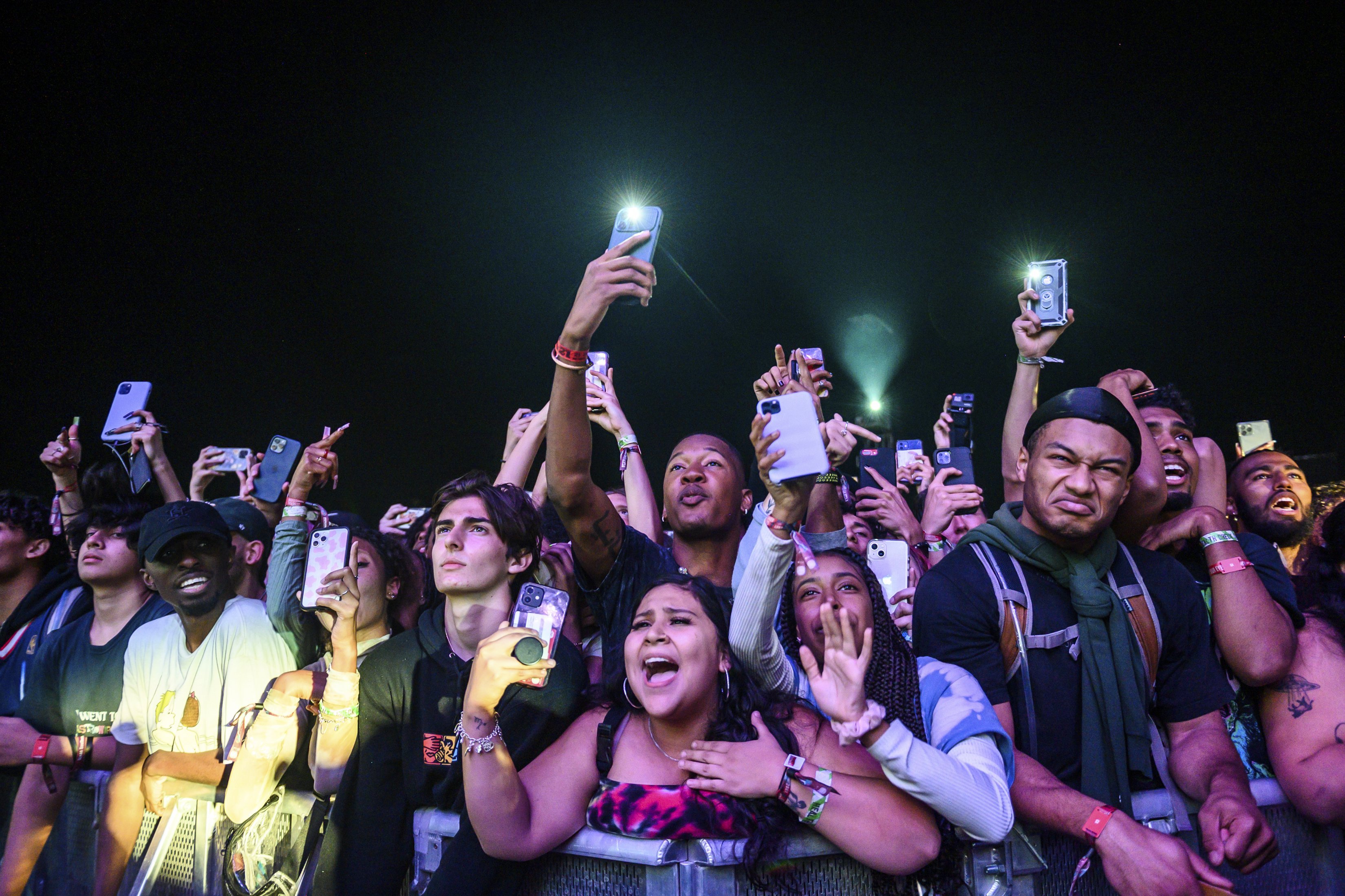 The crowd watches as Travis Scott performs at Astroworld Festival at NRG park on Nov. 5 in Houston. Several people died and numerous others were injured in what officials described as a surge of the crowd at the music festival while Scott was performing. (Houston Chronicle via AP/Jamaal Ellis)
Jamaal Ellis   MUSIC FESTIVAL TRAGEDY

Ten people died and dozens were injured after a crowd surged forward during rapper Travis Scott's performance at the Astroworld Festival in Houston on Nov. 5. The incident, described by a concertgoer as "pure chaos," happened on the opening night of the two-day sold-out festival at NRG Park, where an estimated crowd of about 50,000 people were in attendance. The Houston-born rapper continued to perform after the mayhem broke out. About a month after what officials described as a "mass casualty incident," Scott said that he wasn't aware of the deadly surge until "minutes before" a post-concert news conference.