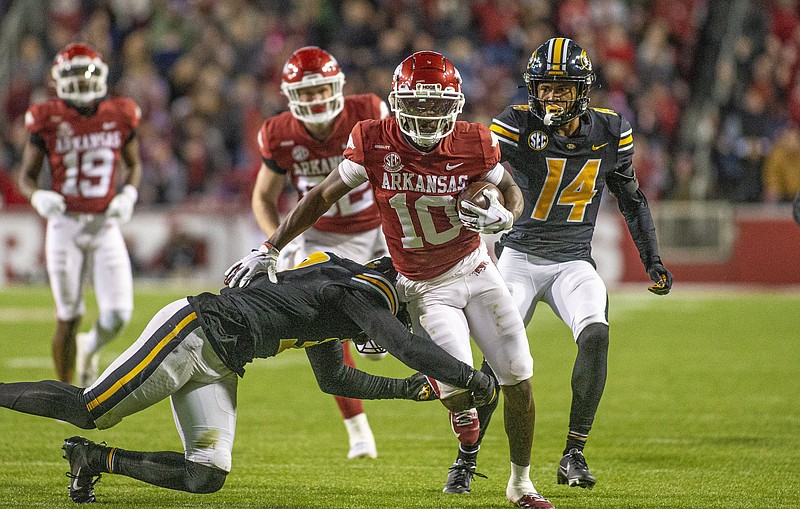 Arkansas receiver De’Vion Warren (10) is among 10 super seniors who returned to the Razorbacks this season to help continue the resurgence in the program, leading up to Saturday’s game against Penn State in the Outback Bowl. “I’m happy that I’ve been here to help with the rebuild,” he said. (Special to the NWA Democrat-Gazette/David Beach)

TAMPA, Fla. -- A hefty group of 10 super seniors returned on the University of Arkansas roster in 2021 seeking more wins, more playing time and more camaraderie -- in short a satisfying end to their college playing careers.

Almost to a man, those Razorbacks have found what they were looking for.

Uppermost in their minds, the team's success has been realized. A group that had only known losing seasons as contributors, whether they were a sixth-year senior like linebacker Grant Morgan or the others, pitched in on an 8-4 run that will conclude in Saturday's 11 a.m. Central Outback Bowl against Penn State at Raymond James Stadium.

"I'm excited for this program, being able to turn this program around and get it headed on the right track," said Fayetteville High graduate Tyson Morris.

The Razorbacks' season opened remarkably with a 4-0 start that featured marquee wins over long-time rivals Texas and Texas A&M, who were both ranked in the top 15 at the time.

A program that was a cumulative 7-27 the last three years spiked at No. 8 in The Associated Press Top 25 poll after beating the Aggies.

"I think those kids who decided to come back for their covid year, or their super senior year, I think the No. 1 thing is they thought we could have a special team," Coach Sam Pittman said on his radio show Dec. 14.

"I think that was something special about it. Then I just think it means more. It was like, this was not my senior year, I chose this year. I could be out in the workforce, I could be in the NFL but I chose to come back."

The Hogs' early surge ended with a loss at then-No. 2 Georgia to start a three-game skid, but the Razorbacks won four of their last five games to reclaim a spot in all the polls, including No. 21 in the College Football Playoff rankings heading into the Outback Bowl.

Added offensive tackle Myron Cunningham, "I just wanted to leave the program better than I found it. ... For us to go 8-4 and have the potential of finishing 9-4, it not only helps me, but it helps this team out greatly for the future."

Fourth-year seniors like Montaric Brown, Joe Foucha, Bumper Pool and Trelon Smith and graduate transfers John Ridgeway, Markell Utsey and Tre Williams gave the Hogs lots of veterans to be the conduit for Pittman and his staff.

Morgan got a chance to be a two-year defensive captain and win the Burlsworth Trophy as the best college player who began his career as a walk-on.

Arkansas Athletic Director Hunter Yurachek pointed out the key leadership provided by upperclassmen in his description of the turnaround.

"We had some guys, especially on the defensive side of the ball when you look at a Grant Morgan and Hayden Henry and Bumper Pool, Joe Foucha, those guys, they came back and they wanted to win," Yurachek said.

"They'd been through a lot as a team when you talk about those guys who had gone through a couple of 2-10 seasons and then last year 3-7 and before that 4-8. We just had some great leadership. To have so many of those guys come back by taking their covid year was a big deal. And they were able to further establish the culture that Sam was trying to create.

Kern, a former walk-on like Morgan, said his goal was always to be the starting tight end, which he achieved last year during the Razorbacks' 3-7 All-SEC schedule in which the seeds of a turnaround were clearly planted.

"That was always what I wanted to do, but I couldn't sit here and tell you five years ago as a 19-year-old kid that I would be where I am today," Kern said. "Couldn't do that. I've been blessed in a lot of ways in my life with family and coaches and teammates.

"Looking back ... I could have changed some things, could've made some things different, but overall it's been a great experience. It's been awesome."

Kern will always have the memory as a senior of reaching back to make a one-hand catch for a 32-yard touchdown from holder Reid Bauer on a fake field goal at No. 2 Alabama.

The Razorbacks became something of a national darling after upsetting No. 7 Texas A&M 20-10 in the Southwest Classic on Sept. 25 to go to 4-0.

That led to multiple national media appearances for Pittman and the players. It was the first of three trophy game wins the Razorbacks would notch.

The super seniors also got to partake in the historic first year of name, image and likeness (NIL) opportunities.

Even Razorbacks whose playing time might have been impacted by the return of the super seniors were enthusiastic about their return for what it meant to the team.

"I think it's been a huge impact," junior defensive tackle Isaiah Nichols said. "Because, you know, we were starting to build good things last year. And it's like, we started something and we didn't quite get to finish it. So to bring everybody back, and then the transfers, you know, 'Kell, Tre and Ridge on the D-line, just bringing all these guys back and having these older guys, it definitely made a huge impact.

"You know, Grant and Hayden, and all the other guys. So I think without them, we wouldn't be the complete team that we are now."

Henry said the 16-13 win in overtime at LSU was the highlight of his season.

"Because when I was growing up we lived in Atlanta and we used to come back every Thanksgiving and watch LSU play the Hogs," Henry said on Pittman's radio show. "It was at War Memorial a lot of times. That game was so special to me. Definitely the highlight of my season, getting to win the Boot finally and beating LSU." 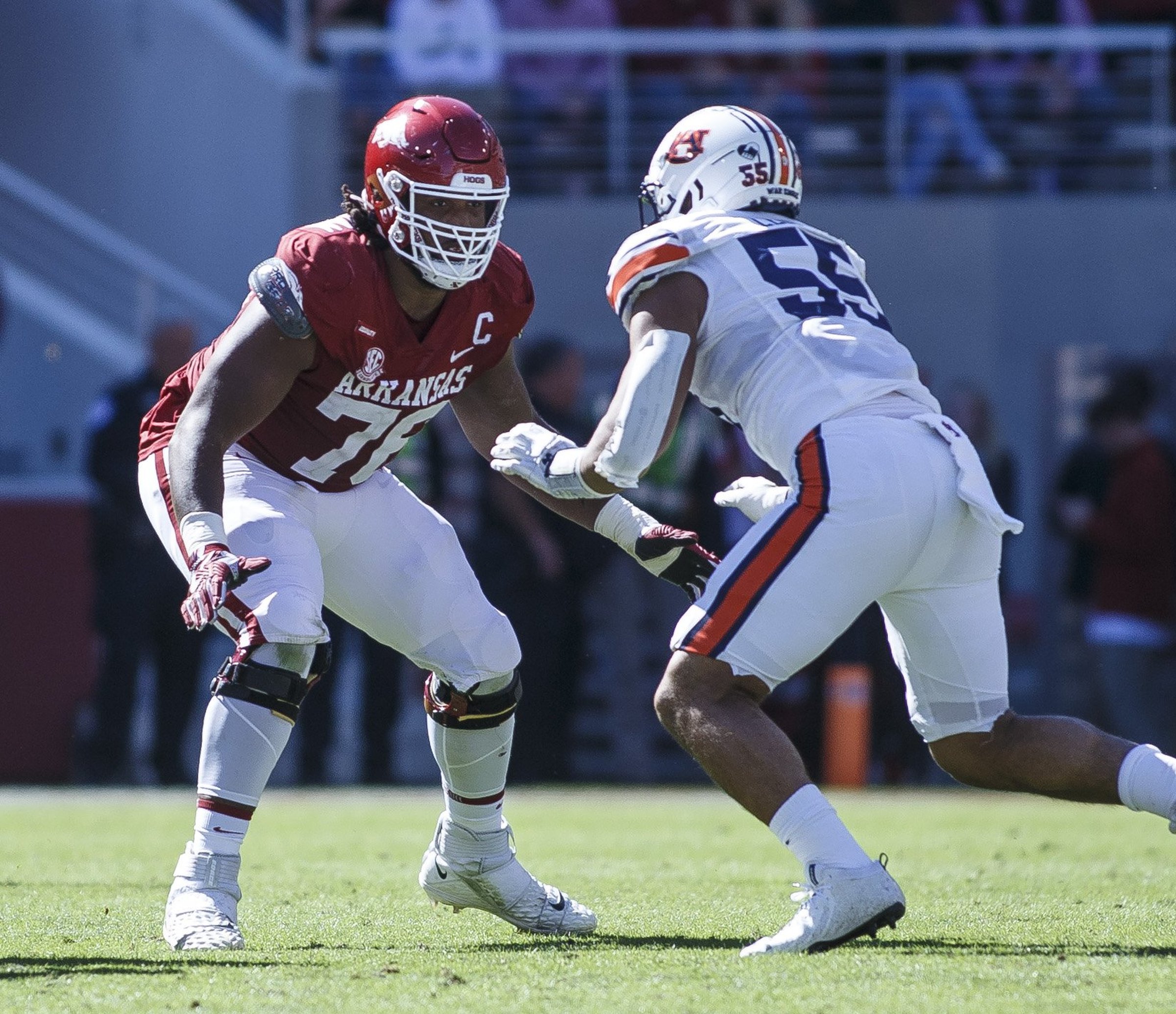 Arkansas offensive lineman Myron Cunningham (76) is among a group of super seniors who have contributed to an 8-4 run that will conclude in Saturday’s Outback Bowl against Penn State at Raymond James Stadium in Tampa. (Special to the NWA Democrat-Gazette/David Beach)