Gone but not forgotten: Notable Arkansans who passed away in 2021 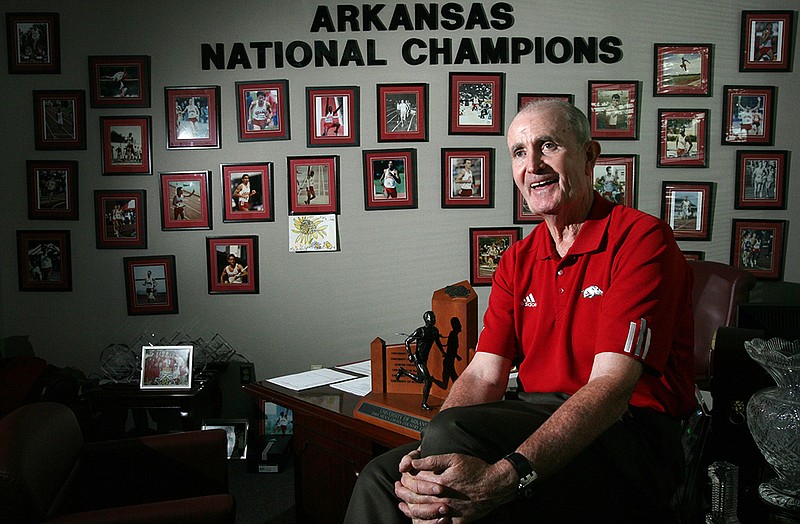 University of Arkansas Coach John McDonnell sits with one of 83 conference championship trophies in his office in 2008. He is among notable Arkansans who died this year. More photos at arkansasonline.com/1231lost/. (Arkansas Democrat-Gazette file photo)

More than 30,000 people die in Arkansas every year -- a number that jumped to 38,132 in 2020, which is the most recent year for which data is available. The list of Arkansans featured here is subjective and does not in any way include everyone who made life better or interesting for their families, their communities, and their state and nation.

John McDonnell and Paul Greenberg were among the most notable who died this year.

McDonnell, a native of County Mayo, Ireland, who became a U.S. citizen in 1969, recruited distance runners from his homeland but also sought out athletes from other countries to become Arkansas Razorbacks.

Greenberg died April 6 at age 84. He had been awarded journalism's highest honor, the Pulitzer Prize.

Born in Shreveport, La., and recipient of a bachelor's degree in journalism and a master's degree in history from the University of Missouri, Greenberg did some post-graduate work at Columbia University in New York before he landed in Pine Bluff. He worked for the Pine Bluff Commercial for most of 30 years.

He won the Pulitzer in 1969 for his Commercial editorials about civil rights.

"Most of the editorials dealt with the integration of Pine Bluff schools and society," Greenberg said in a 2007 interview. "It was prointegration, procivil rights, anti-Wallace, against massive resistance, against the Southern Manifesto." Wallace was Alabama Gov. George Wallace, who was running for president in 1968.

Greenberg wrote the editorials, and Edmond Freeman, the Commercial's publisher, edited them. Freeman also died in 2021, on May 3, at age 94.

Following are some of the other lifelong or short-term Arkansans who died in 2021, listed in chronological order by date of death. Information about each was pulled from newspaper and/or funeral home obituaries and articles written about them.

Ed Bruce, 81, Jan. 8. A country music singer, songwriter and actor wrote "Mammas, Don't Let Your Babies Grow Up to be Cowboys" and "You're the Best Break this Old Heart Ever Had." Bruce was born in Keiser in Mississippi County and was ultimately presented with the Arkansas Country Music Awards' Lifetime Achievement honor in 2018. In 2005, he was inducted into the Arkansas Entertainer Hall of Fame.

Ralph C. "Chad" Colley Jr., 76, Jan. 30. After losing his legs and an arm in a landmine explosion in Vietnam, the 24-year old Colley of Barling became a real estate agent, a pilot, a para-Olympian ski champion and an advocate for disabled American military veterans. Named as Disabled Veteran of the Year in 1970 and a one-time vice chairman of the President's Committee on Employment of People with Disabilities, Colley in 1996 was a speaker at the Republican National Convention in San Diego.

Annabel Battistella Montgomery, 84, Feb. 10. At 2 a.m. on Oct. 7, 1974, the exotic dancer with the professional name of Fanne Fox, the Argentine Firecracker, fled from a car that had been stopped by police for lack of headlights. She jumped into the Tidal Basin near the Jefferson Memorial in Washington, D.C. Her drunken companion was U.S. Rep. Wilbur Mills, D-Ark., the chairman of the House Ways and Means Committee. The event sparked a Washington, D.C., sex scandal that led to Mills' removal from the chairmanship and treatment for alcoholism. Later, Montgomery earned multiple college degrees in fields such as business administration and marine science, according to a Washington Post story about her and her death.

Steve N. Wilson, 76, Feb. 21. As director of the Arkansas Game and Fish Commission from 1979 to 2000 and a passionate conservationist, Wilson oversaw the development and expansion of wildlife management areas and landmarks. Modern-era hunting of bear, elk and alligators in this state are the result of his administration. New fisheries were planned and developed. The 1996 passage of Amendment 75, authorized a one-eighth-cent general sales tax to support multiple state agencies led to increased lands for public use and increased number of wildlife officers plus the operation of five nature centers, four conservation education centers and programs.

Gene Roebuck, 85, March 8. A former Razorback football player, lieutenant colonel in the U.S. Army, and a football coach at Trumann and Jonesboro, Roebuck served two terms in the state Senate.

Ellen Smedley Smith, 106, of Fayetteville, March 18. Smith developed a love of golf with her husband as members of the Fayetteville Country Club. It stayed with her the rest of her life to the point that the Golf Channel noticed. In 2014, the cable channel featured Smith in a segment called "Ellen Smith, 100-Year-Old Golfer."

Harold Ives, 91, of Hot Springs, May 21. The Stuttgart native quit school at 14 to work the family farm. He purchased his first truck at 18 to haul commodities during the off-season. In 1984, he began the trucking company that bore his name. Harold Ives Trucking grew from 40 trucks and 70 trailers to 500 trucks and more than 1,100 trailers before the company was sold in 1999.

Mark Jones, 65, Aug. 11. A claw-hammer banjo player, storyteller and son of television's Hee Haw star Grandpa Jones, Mark Jones played at the Grand Old Opry, was a fixture of the Ozark Folk Center and a regular with his "From the Vault" segment on Ozark Highlands Radio, a Saturday evening show on KUAR-FM 89.1.

Connie Hamzy, 66, Aug. 21. Hamzy, a self-proclaimed groupie of rock 'n' roll bands that visited central Arkansas, was mentioned in Grand Funk Railroad's 1973 anthem, "We are an American Band: "Sweet, sweet Connie, doin' her act. She had the whole show and that's a natural fact." The song topped the Billboard chart for 17 weeks.

Fred James Taylor, 88, Aug. 27. Oklahoma native Taylor worked for 38 years in the University of Arkansas system, 27 of those -- 1977 to 2004 -- as chancellor of the University of Arkansas at Monticello during which the campus flourished in terms of enrollment, degree programs and building construction.He was an advocate for the arts, international exchanges of students and research, for the National Guard and Reserve, and for the aging.

Rickie Lee Reynolds, 72, of Memphis, Sept. 5. A guitarist and founding member of the rock band Black Oak Arkansas, Reynolds and the band's lead singer, James "Jim Dandy" Mangrum, met in school in Monette, five miles north of Black Oak where they first rehearsed in a grain elevator. Black Oak Arkansas charted 10 albums in the 1970s and had a Top 40 hit with a "fiery version" of LaVern Baker's song "Jim Dandy," according to the Encyclopedia of Arkansas. Bruce Springsteen opened for Black Oak Arkansas at Kent State University in 1974.

Carolyn Pollan, 84, Oct. 23. Pollan of Fort Smith was the longest-serving woman and Republican in the history of the Arkansas House of Representatives, serving 12 terms, from 1975 to 1999. She created and chaired the Children and Youth Committee, now the House Committee on Aging, Children and Youth. After term-limiting from the legislature in 1999, Pollan was a senior staff member for three years for Gov. Mike Huckabee.

Willie Cobbs, 89, Oct. 25. Born and raised in the Smale community of Monroe County, Cobbs was a blues harmonica player whose song “You Don”t Love Me,” was included in the Allman Brothers Band album “Live at the Fillmore East.” He had a role in the Denzel Washington 1991 movie, “Mississippi Marsala.” In 2013, Cobbs won the Sonny Payne Award for Blues Excellence that recognizes individuals who have strongly influenced the blues music of the Arkansas Delta.

Bobby L. Glover, 85, Oct. 27. An accountant and insurance agent, Glover served 10 terms in the state House of Representatives and eight years in the Senate. He is a former Carlisle mayor and was a member of the state Board of Correction under two governors.

Travis Mac “Mike” Trimble, 78, Nov. 20. Trimble’s 48-year career as a newspaper reporter and columnist started at the Texarkana Gazette and was followed by jobs at the Arkansas Gazette, Arkansas Times, Pine Bluff Commercial, Arkansas Democrat-Gazette and Denton Record-Chronicle. He was described “as clever a mind” … and as “accomplished a writer to ever grace any newsroom anywhere.”

Garrick Feldman, 73, Dec. 5. He was the founder and publisher of The Leader, a newspaper that covers north Pulaski, Lonoke and White counties.

Fred Kellar Noggle, 82, Dec. 7. Noggle served as executive director of the Arkansas Association of Educational Administrators — an organization of the state’s superintendents, principals and other school leaders — from 1976 to 2005.

Rosemary Chu, 93, Dec. 9. Chu, who escaped from China in 1949 with only the clothes she was wearing, served as “Dorm Mom” at Ouachita Baptist University for 42 years. Upon her 2009 retirement, the university named a new dormitory — Mom Chu Dormitory — in her honor. 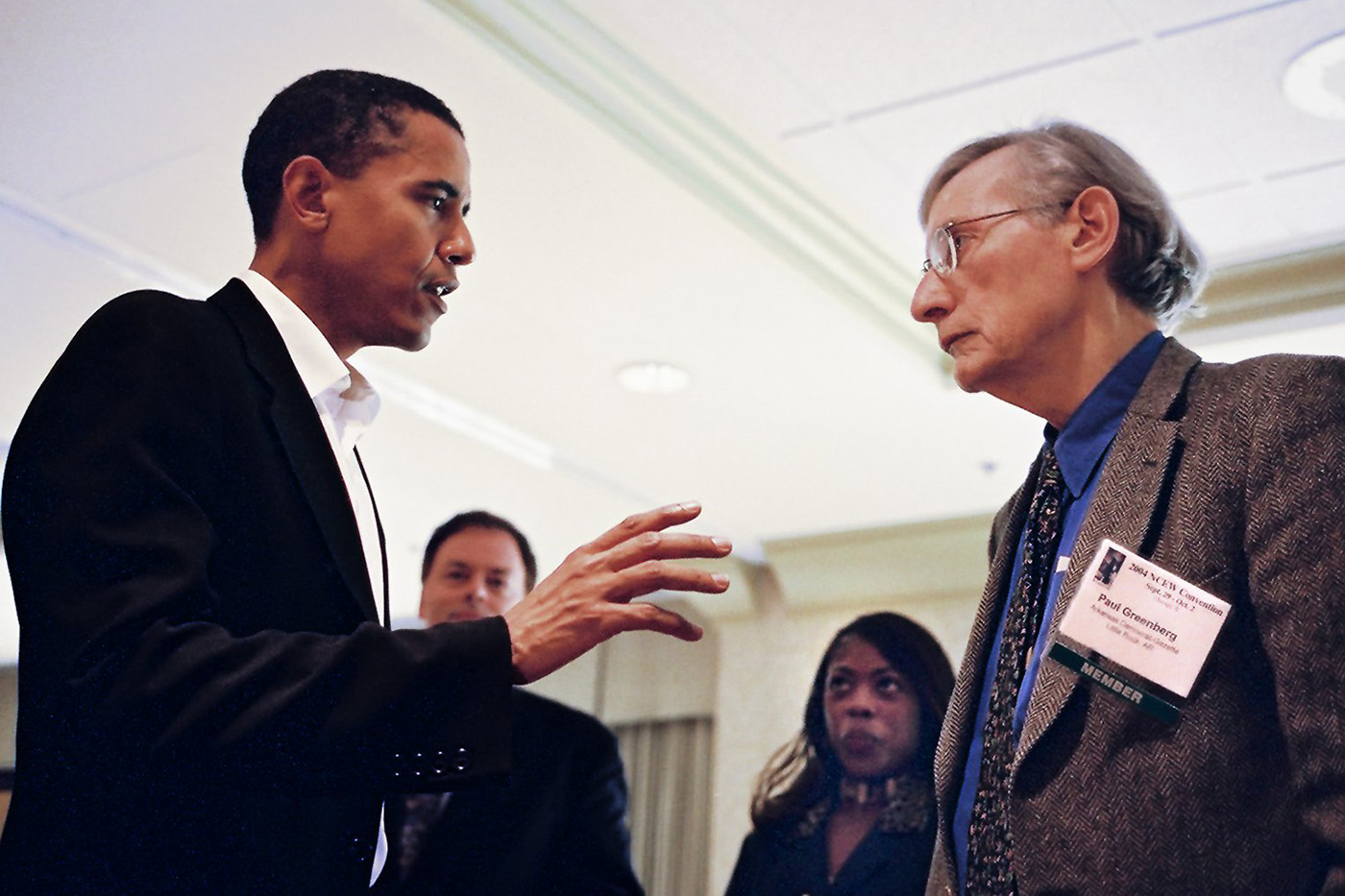 Barack Obama, then a state senator from Illinois, talks with Arkansas Democrat-Gazette Editorial Page Editor Paul Greenberg in 2004. Obama had just given a speech at the National Conference of Editorial Writers in Chicago during his campaign for the U.S. Senate that year. Greenberg was among notable Arkansans who died this year. (Special to the Arkansas Democrat-Gazette)
ADVERTISEMENT